Every woman should have male friends who are really, really tall.  Over 6.5 tall.  When you have a blobby day, they make you feel thin, small and girlish. I lucked out and count six Tall Boys amongst my friends. 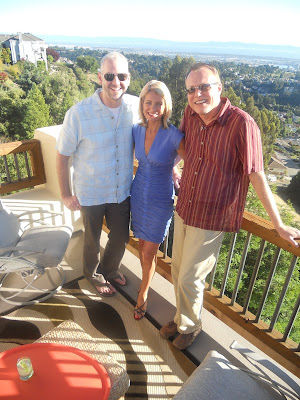 One of them, David, was turning 50 and Kenny'n'Mike were having a large dinner for him at their Oakland Hills home.  One of the Dads, Francisco volunteered to cook for a party of 25. While Francisco tended to the steak, chicken mole, rice and spicy tuna, we gazed out at the goats grazing the hillside. Did they know what a great view of the Bay Area they had? 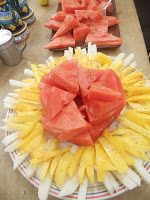 First pic shows me in my blue dress, stretchy to accommodate the three plates of  Mexican food, with irridescent Christian Laboutins. On either arm, David and his partner Martin, who also happens to be Francisco's son.

Colleen has come up from Pasadena for the party.  Here she is demonstrating her ten years of huge-tips waitressing, before her career in forestry. Colleen always has something on the groovy go. She's currently living in Pasadena in a The Shining type-building, doing up an old Airstream trailer for her surfing trips. 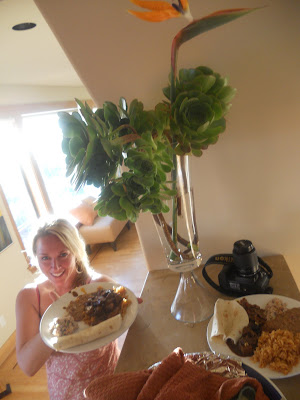 Colleen is wearing her new flowy Socal dress. I've got on my Nicole Miller, which in the past has been called "not flattering and too bandage-like." The kids say it makes my avatar look huge.

Both of us know it doesn't matter what we wear. We're going to look thinner, younger and fresher standing next to The Tall Boys.  Make them your friends. Even better, marry one. See below. 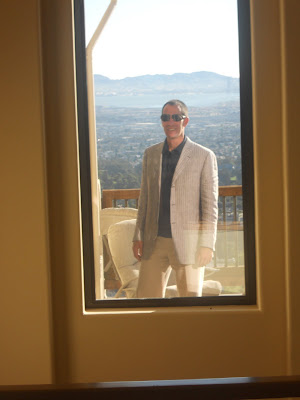 Posted by About Last Weekend at 11:19 PM