Photo shoot at my house

I'm sure we would all love to be models. But we can't be. For me, it's just a few small things: big nose, droopy eyelids, elephant skin knees, bingo wings.  Otherwise "supe" would forever preface my first name...

But if you can't be a model, what's the next best thing? Your fridge and walls can be. Great excitement at my house this morning because my house was in a photo shoot for Lesley Evers dresses. 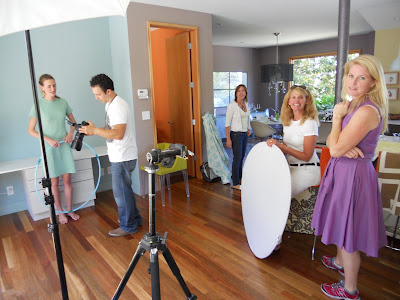 Lesley is one of the mums at my school, living just around the corner. She started making frocks two years ago, after she ordered a dress online. The dress did not fit and Lesley was mad. But instead of ranting aimlessly, then scarfing a glass of wine like I would, she did something about it. She sat down at her sewing machine and made herself a lovely frock that did fit. And she called it an "everyday" dress. I remember it looking comfortable and having boatloads of personality, reminiscent of another time. Many of the other mums at school wanted one similarly nostalgic, so she sewed them one too.

Now just two years later she sells her 18 styles (double that by Spring) online, though trunk shows and in 70 boutiques around the US and 20 boutiques in London.

Anyway she wanted to use my house for her photo shoot and I was so flattered. There was going to be a real photographer and a real model. 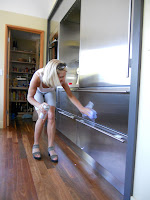 That morning I did a spot of cleaning, starting with shining up the fridge and stove area.

The photographer, Quentin Bacon (love the name) immediately likeable and flattering, arrived with a carload of equipment, which was already pretty invigorating. Then Lesley's model Laurie arrived at the door.

She was willow tall-slim, a  radiant smile and with what they call here "dirty blonde" hair. The surprise was that she was also terribly sweet (from Ohio), kind and accommodating. She did her own make-up and hair, thanked the photographer for allowing her to preview the shots and never even asked for a glass of water. "Don't worry about me, please" she kept saying.

After several nosy enquiries from moi, I learned that she was aged 30 (I thought she was just out of High School, this is what happens when you're 48). She is a pilates instructor, married, is  5.10, has a 25" waist and even Lesley's SMALL dresses had to be pinned by a handful of material in the back. See model Laurie model below left with Lesley, happy clapping. 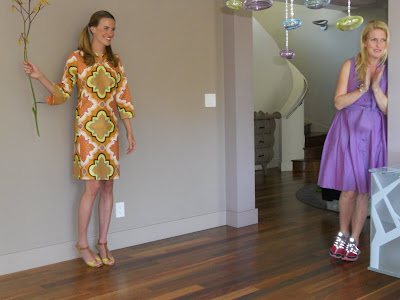 Some of Lesley's team arrived then;  recruited from the incredibly talented Mums at our school. Candes is graphic design and Donna advises on her website and blog.

No one could have been a prouder stage mum than me when Quintan picked my cardboard Gehry wiggle chair  for her to pose with. Then my beloved green Modernica chaise.

And when Quentin the photographer started clicking, her poses were: coquettish, subdued, starry-eyed, joyful, silly and athletic by turns. Arm here, arms there, eyes up, knee to the side. And it looked so natural, like a slow and charming dance. And she could be California-fresh in a patterned tunic dress or London edgy in the black boots and black and white skirt. 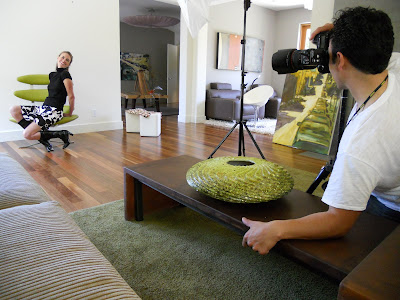 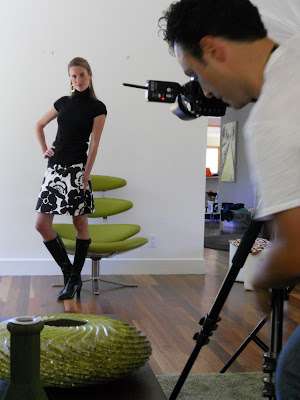 And this is why so few of us can be models.

Not to mention that I'd just read in Elle magazine last night that some designer houses in Europe have gone so far as to draw the line at a 23-inch waist - if a model is any bigger she need not apply to walk in their shows. The magazine goes on to say that April's Journal of Consumer Research "indicated that consumers were not inspired by heavier models. When women viewed a heavier model they worried they were similarly overweight and presumably would be less inclined to purchase."

The shoot was over and everyone went home. Exhausted from sitting on the couch for four hours watching other people work, I couldn't carry on. 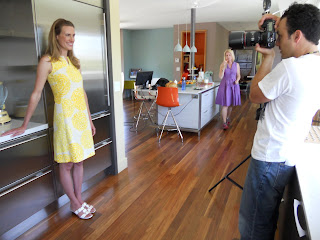 I cooked up a bacon and egg sarnie and took a much-needed nap. After all, someone needs to be the diva. Plus I was so proud of my stage kids ooops, fridge.
Posted by About Last Weekend at 9:53 PM