I approached this past weekend swaddled in grumpiness... not sure if it was extended jet lag or winter blues, but I couldn't shake it off. There was no reason for the harrumphy grump, which makes it even more shameful; still have the great husband, four healthy (albeit slightly annoying) kids and my in-laws were visiting, people so decent they make the world a better place.

As you will find out, I was pulled out of my funk by the plastic knife-spoon thing I found in my pack of Kiwifruit. Bear with me. 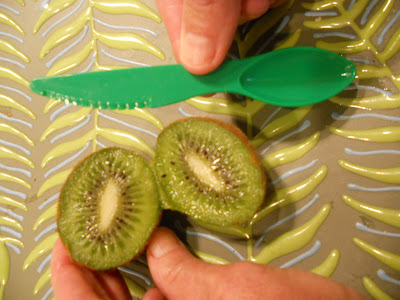 My sister Pietra happened to send me a blog called 1000 Awesome Things (26 million hits can't be wrong).  I am bit of a cynic (you haven't noticed?) so usually I skip the chicken-soul-soup philosophies but this young blogger, Neil Pasricha, was entirely compelling as he spoke on TED about his wife leaving him "She told me she didn't like me" which I think is worse than if she didn't love him.  Further dark clouds gathered with the death of a friend and he felt totally lost. Somehow he found the strength to start a blog (first, just his mother read it) focusing on life's simple pleasures.

Pleasures like: free coffee refills, being the first table to be called for the buffet at a wedding, being first up when another check-out line opens at the supermarket, getting the milk-to-cereal ratio just right, locking people out of the car and pretending to drive away, ugly actors, fat baseball players...

So along comes my thing. I had just bought a pack of six kiwifruit and discovered they came with a free plastic knife-spoon implement, whereby you slice the kiwifruit then scoop it out with the same thingy. It's only a small thingy, but somehow it means you eat loads more kiwifruit and of course feel much better for it.

Loaded with Vitamin C, we headed off to see another more famous grumpy person at The Walt Disney Family Museum in San Francisco. The entry price almost plummeted me into another vortex of perplex - $20 for each adult and $15 for children six and over - making it prohibitive for many families. But we paid up and I was glad we did. 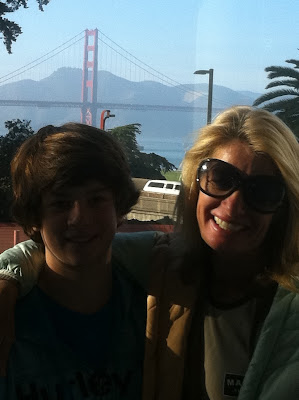 We watched scenes from Snow White and the Seven Dwarves, surely the perfect story line and characters; beautiful girl, groupa great friends, handsome Prince and meany Queen. It's not really a museum for small children - too much reading was needed -  but most adults will spend hours reading and watching. Cy chuckled over the Dwarves washing their faces. Is there any sound sweeter than a six-year-old chuckling? 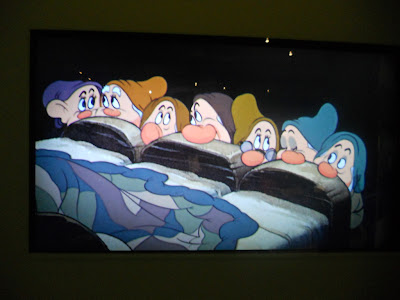 I was so happy when I saw the toilets - so brave to do red and orange together, don't you think? And it worked.  Outside there were sky-blue sparkly floors...just stood there for a long time marvelling at the shimmer shine of those floors. Wow! That Vitamin C is really kicking in! 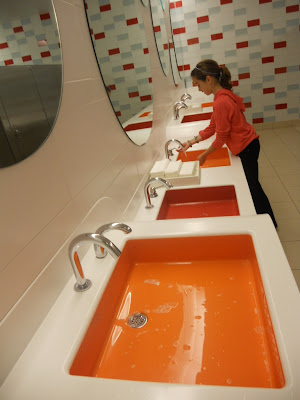 We ate at another icon, the Fog City Diner. As promised by the restaurant's title the fog swirled all around while we dined. And - I heeded the warning on the door - no crybaby me. 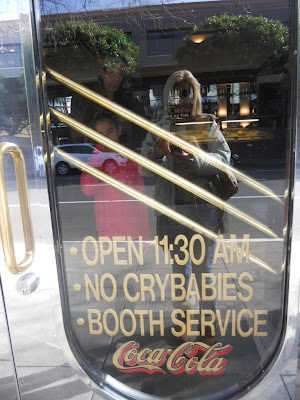 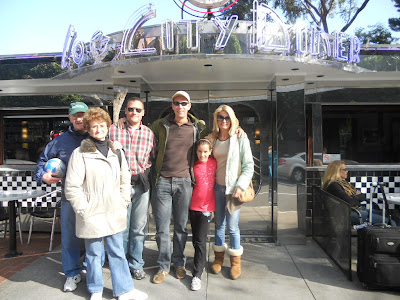 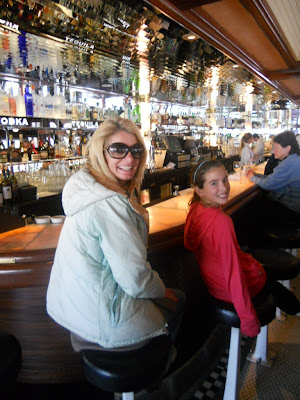 The next morning we took the kids and three carloads of their friends to SkyHigh in Concord, a place chockaful of trampolines where you can literally bounce off the wall and play dodgeball without injury. I actually boinged around too, kicking my legs and waving my arms in a very jaunty fashion, making Kevin laugh our loud and my kids cringe no end. 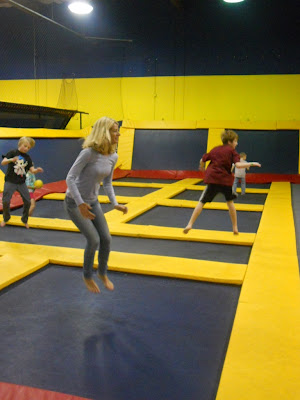 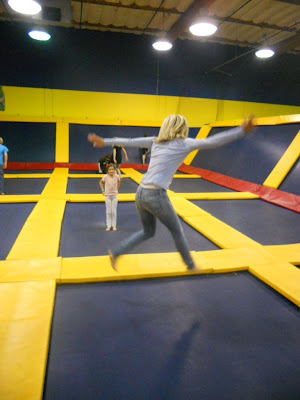 That little free plastic Kiwifruit spoon-knife whatsit had done it. I was released from the funk. No esoteric reading, deep analysis or week-long yoga retreats needed...

Tell me, do you ever get grumpy for no good reason? How do snap yourself out of it?
Posted by About Last Weekend at 9:33 PM