This weekend we ignored all official storm warnings and set off for Tahoe at Friday lunchtime. (And I wonder why my kids are so contrary). The traffic was slow but not the 12-hour horror expected.  We spent five hours in the car learning a lot more about each other... 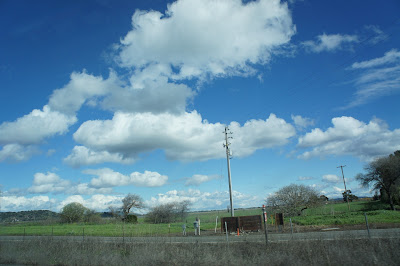 Have you ever spent five hours thinking you're trapped, er, starring in three rotating scripts?  Scripts which might have been rewarded with Oscars if anyone could bear to read through to the end? 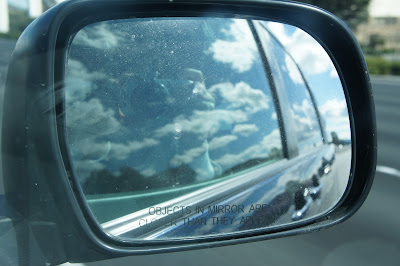 After two hours of driving we are in Abbott and Costello's "Who's on First?"
Cy, seven, ventures: "Those clouds are cumulins. They have m'n'ms of water in them - and air!"
This is pretty amazing for a start, because Cy never mentions school without grumbling: "They're just wasting my time, wasting my time..." as though he is forfeiting meetings with Steve Jobs. (And despite the fact that he always looks euphorically happy whenever I see him at school.)
Jackson, 11, : "Molecules, it's molecules of water"
Cy: "Something moolen'ms..."
Jackson "Molecules"
Cy: "No, it's something starting with M - we did it in science."
Everyone: "Cy! - You have science?"
Cy: "Yeah, we blow bubbles."
Whereupon everyone cracks up laughing. Cy yelps for half an hour, his feelings sorely hurt. 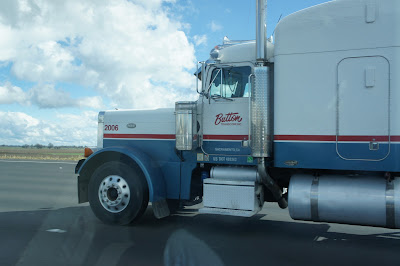 Next there is the No Exit part of the trip, which I have named after an existential play where all the characters think they have checked into a luxury hotel, but they have actually arrived in hell.

After several hours of slow driving it starts to look like the Donner Pass to Truckee will  remain closed and we will have to turn back. We get Harley, 13, to call around for a hotel to stay the night.

After loads of calls to fully-booked hotels all along the I-80, Harley locates a room with two double beds.

Harley shows us pictures of the hotel which looks very average; grey and pink with a tiny pool. The kids pass round the i-pad and oooh and aaah.
Tallulah, nine: "Look at the conference rooms!"
Cy: "There's a hot tub!"
Jackson: "And a foyer!"

Kevin starts pontificating, er sharing, about how booking a hotel is like having insurance. My eyes glaze over as he explains how insurance is a tangible benefit.

After listening to this at some length Jackson says: "But where does the car insurance come in?

Harley, 13: "Tangible is one of our spelling words."

Suddenly the Pass looks to be clearing and Kevin and I have a 30-minute discussion about whether to cancel the hotel room.

Screams of rage eminate from the kids and continue unabated:  "But the conference rooms!!!" Eventually Harley gets on the phone to the hotel. After loads of back and forth from the hotel we're told - they've never received a booking from us... 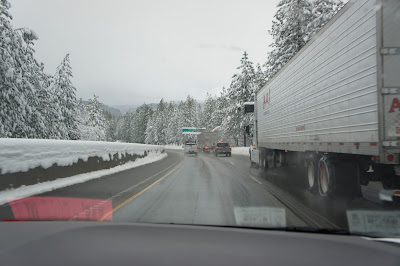 Then there is the Waiting For Godot part of the trip - the final hour. When Cy's singing starts to makes sense: First up is The Killers hit. "Somebody told me you had a girlfriend... that looks like a girlfriend and then you had a boyfriend that looked like a..." Then his second favourite, an esoteric Katy Perry number: "That's what you get for Waking Up In Bacon" and you really start to wonder why they didn't use the word "Bacon"  instead of "Vegas". Because you're basically in bacon when you wake up in Vegas... 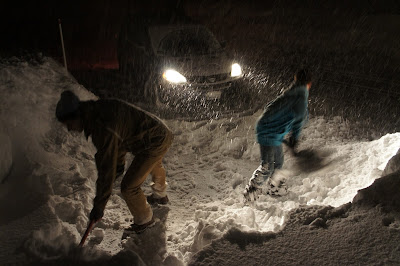 At last we were there! - with a driveway and a house covered in snow.

After watching Kevin and the kids shovelling,  I headed straight for bed exhausted. I wake at 1am to Cy's howls, two slams of the door and another howl from Harley. I pretended I hadn't heard anything and eventually Kevin rose and walked into their room - and howled.

Cy had obviously woken up with Mountain Man's Montezuma's revenge, couldn't find the doorknob in the dark, was caught short and the cream bedroom carpet was carnage. (Sorry, I just realised this is the third of my stories to end like this) Kevin spent the next hour cleaning the carpet, amid groans of disbelief and murmers of encouragement from myself ...from my bed.

We woke up the next morning to sparkling everything; snow-flakes twisting in the sharp air and the soft high snow shimmering on the ground. 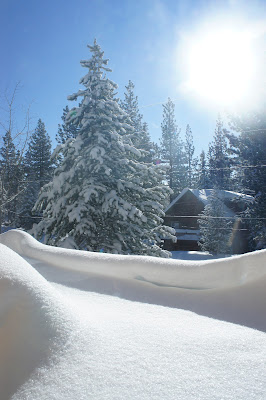 Tallulah, nine,  looked out the window spellbound: "It's so beautiful, it's like we're in a movie. Like we're on the silver scream." 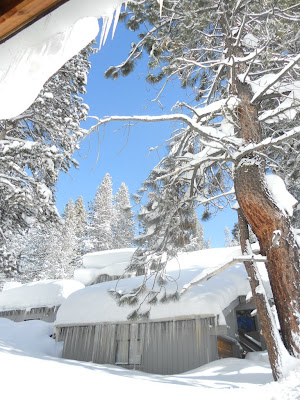 Did you have any silver scream moments this weekend?
Posted by About Last Weekend at 10:23 PM