Do French Women Get Fat?

Kevin and I skipped off  to the South Of France for two weeks - and we now know the answer to the eternal question - Do French Women Get Fat?


Yes, Kevin and I have slipped away again by ourselves.... ever so quietly - this time to France for nine days. For the last four days we've been staying in the tiny hillside town of Saint-Paul de Vence, near Nice. Tucking into huge blocks of cheese and French bread over the weekend (as you do) I had many questions about the French. And the best person to answer is our host, Linda, an Australian who lives here with her children Madison, 13 and Theo, 11. As this photo shows, we knew them ten years ago in London when Madison was best friends with our son Harley.


Linda has lived in France off-and-on for 20 years and full-time for the past eight years in a 1770 former farmhouse. Needless to say both she and her kids are bi-lingual.  Linda explained that French food is not normally smothered in sauces and the custom is to eat one dish at a time.  Accordingly, we sat outside eating loads of melon, barbequed pork chops, cheese bought from the markets in Italy where Linda shops most weeks and lashings of Madison's tabouli with chopped-up everything from their garden.  But how civilized, one dish at a time.

We never stay at anyone's house with the kids - that would produce fear and loathing from even the most tolerant of hosts. But because we were by ourselves we accepted Linda's generous invite to stay and it was a great chance to pick her brain. What are five things we may not know about the French?

Linda's Five Facts:
1. Quelle horreur! French women do get fat. The ones that don't get fat eat an apple and a low-fat yoghurt for lunch, a salad for dinner and drink coffee and smoke lots of cigarettes all day long. French women who get fat eat cheese and bread and wine and ham and pate and pastries and croissants etc and this shows they enjoy life. French women who are skinny and hence do not eat are miserable (and never speak in English). See number 6.
2. French women wear beautiful and expensive underwear. Once could speculate that the health of the French lingerie market is directly linked to the high occupancy rates of hotel rooms between, say, 3pm and 5pm on Friday afternoons.
3. Single men and especially single women do not get invited to seated dinner parties unless it is to make up numbers. The general rule is that there has to be an even number of men and women at the table. The perceived threat of a single women is directly proportional to her lingerie budget (see no 2).
4. There are rules for everything in France including how to cut cheese. There are more than 360 cheeses and a certain way to cut each. The general rule is that you cut to ensure you share the best part, whether it be the centre or the mould.
5. You always kiss friends on the cheek as a greeting and when you say goodbye -  most people know that. But each area is France has a different number of "bise" or kisses. In Paris it's four, along the Atlantic it's six times.
6. And a bonus fact from Madison. We think of French as the language of love, but Madison says it's perfectly suits anger. Madison, 13. "I find it easier to shout at someone in French. When I get mad at my brother it's always in French. When I'm happy, I speak in English." Linda agrees with her daughter, and adds: French is also very good for complaining. 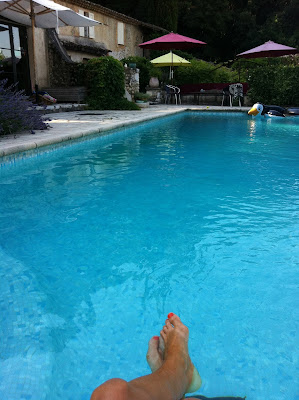 Please feel free to add to the list!
Posted by About Last Weekend at 4:06 PM