How much cash is this? Who knows? The other "me" knows...Well sorta "other me" -  it's the person who previously owned my supposedly new phone. But now I feel we're linked... he's left all his pictures and his favourite songs on my phone.

To explain: we had bought what we thought to be a brand-new Android phone on ebay. My very first smartphone. I took my first photo on Saturday night and found his pictures already there. This cash. Loads of pictures of a man in a public bathroom kissing the cash. More cash. There's one where he has a heeeuuuge gun. (It's a toy gun, my husband Kevin said. Hmmm.)

Next day the kids discovered his music and we danced in the kitchen until I actually realised what the lyrics were. (If you're looking for the picture of me doing the Dougie,  that's a treat for another day.) Money, guns... You might be suspicious of my other phone self...but I'm sure he's not a gangsta but rather a man adept at his two primary hobbies; paint ball and monopoly.

I do strive to be my Oprah-esque Authentic Self. But what if you have more than one self? Not in the United States of Tara way...for me it's the disco duck followed by the disco napper.  I would go out every night if I could. Last week I thought was a quiet one but I actually went out four nights.

During the day I am a solitary soul happily whiling away the hours, padding around the house or reading under my duvet. Some might feel this second authentic self is bloody lazy. Dear readers, I prefer to consider these unproductive days as untutored meditation.

This week both Tallulah, 10, and Jackson, 12, had a birthday - Geminis and consequently there's four wee personalities with plenty to bicker about.
"Will you two stop fighting?" (anyone around them)
Tallulah: "We don't fight that much"
Jackson: "Yes we do, all the time!"
Tallulah: "What about yesterday?"
Jackson: "We fought all the time!"
Rotate that loop...

I have to say Cy, seven, is never too far from his one authentic self. Here he is on Saturday elated after a torrentially rainy soccer game, eagerly awaiting the team snack. 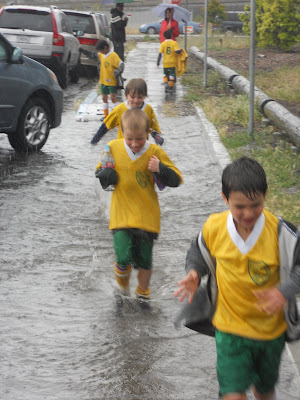 Here is his face when we tell him the designated snack parent (probably us) forgot to bring snack. 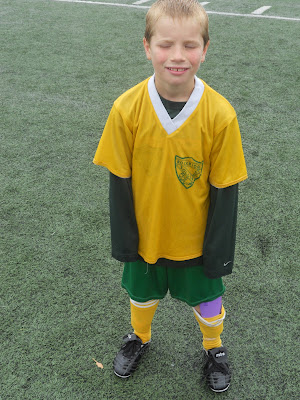 But sometimes his thinking is more elusive...
What goes in that little mind?" says Kevin as we drive away from the field, Cy asking his usual million questions about road signage, NBA players, road signage.
"Well...lots of things" Cy ruminates and then confides: "But sometimes it's so boring in there. You know, sometimes I ask you questions when I already know the answers."

And what am I doing about the monopoly-winning paintball-enthusiast on my phone? There are three of us in this ...er relationship. And it's getting a bit crowded. His photos have to go, but I'm keeping the playlist. Check it, I feel disrespected and (something something) I have your number on ID... Fabolous Fat Jo yeah...check it..(something, something)

Do you have two authentic selves? Or just the one?

Posted by About Last Weekend at 8:51 PM