There are friends whom you haven't seen for years, but you pick up exactly where you left off.  Riffing for hours. Rina, also a Kiwi, is such a friend. This weekend she dramatically decided to fly over from London where she lives, while listening to a marathon of speeches at a hospital retirement party. As soon as I picked her up from the airport she told me about the final speech. One doctor said the retiring woman had been a perfect nurse: "Hard-working, pleasant...and fat." Rina always arrives well-armed with bon mots and bizarre anecdotes.

I met Rina 22 years ago in a hotel in Cairo. We were both backpacking through Egypt and at that stage I was traveling by myself.  We bumped into each other again climbing Mt Sinai. She was with bickering sisters and fleeing three randy Israelis vying for her favour and was relieved to have a buffer.


We met again back in London where I was working as a journalist and she as an anesthesiologist.  She was different from the rest of the Kiwi crowd - she had wheels, a Fiat Panda, and on several weekends we blatted off for mini-breaks in the wilds of Britain, ostensibly to ride horses. We both envisaged ourselves galloping over the green hills, the wind blowing through any strands of hair which escaped our black velvet riding hats.  As I've said before in another horsey post, Rina sighed: "All I want to say is: 'Whoah there my beauty!'"( in true Bronte style). Instead we were heaved onto farty old nags who could barely move one step without tugging their heads down and grabbing another gobful of grass.

She was there when Kevin and I first met and we would frequent a Chelsea nightclub in which Kevin had a tiny investment. This was a place where Chaka Khan's sister, Taka, was the top-billed act. (You didn't know her?) We turned up one night to be told the kitchen had run out of food which was just as well because the cutlery had disappeared.  It was no surprise to learn the barman was an chronic alcoholic and the manager a gambler and the club closed it's doors.

Later I persuaded Rina to be in one of my articles for London Evening Standard about being single in London.  I don't write the headlines but you can image how thrilled she was to be smiling under this particular one. "Bright, single, 30-plus and...looking for a man." Oh, she was so happy. JK(Just kidding) as Cy would say, she was apoplectic.

Once the constant JK-ing at her hospital died down and the rash of letters from sundry oddballs and stalkers trailed off, I wrote another article, this time on single men in London. "Desperately seeking someone single."But the previous headline flashed up again. Rina was still horrified but ruefully confided it was one of her most widely-read publications as a doctor. 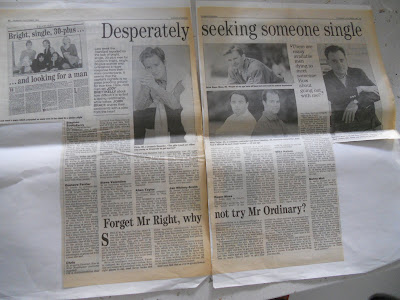 One year later I contacted the five women to see if they were still single. "No comment" said Rina, hoping that would be the end of it. But there was that headline again. Happy ending though, phhew, she is married to a Kiwi architect and has a three-year-old girl called Pashmina. Hmm... maybe time to do yet another follow-up.

Her four-day visit here was an opportunity to be a tourist again in Oakland and San Francisco and we walked the length of the city for four hours, from the greasy Pier 52 to open Chrissy Field with views of the Golden Gate Bridge and back to North Beach with smells of pizza, garlic and hazy revellers from last night's comedy shows.

Rina soon ascertained that the Bay Area prides itself on being a gastronomic haven, quality local produce served with passion and occasion. So that evening while friends Kenny'n'Mike treated us to a meal at Oakland's Camino restaurant, she proudly claimed that despite being a busy mother in central London she plucked the first crop of her tomatoes this summer.  Kenny quizzed her - which variety? - heirloom..? Those ones from the Black Sea? "Just cherry, basic cherry, but slightly orange," she replied visibly miffed that her only organic produce story had been upstaged so early in the evening.

Rina described our larder (pantry) as the size of a  "small aircraft hangar" and was incredulous that I've replaced cooking with "assembling." Then she admitted these days she merely "dipped" and did not even warm her pre-prepareds.

Coming down to breakfast after a rowdy barbecue the night before, Rina found herself facing a kitchen littered with 15 wine bottles, two sliced un-eaten watermelon, pizza dotting the TV room and dirty plates piled up.  It was first day back to school and Cy, seven, was packing a lunch of left-over chocolate-covered pretzels with a face still painted from the night before. Then she was treated to a full-on fight between Jackson, 12, and Cy, culminating in Jackson whacking Cy with a Whiffle-ball bat.


A Whiffle ball dispute (surely the worst kind). It wasn't even 7.30am and I'm sure Rina was very ready to return home to her small but perfectly-formed cherry tomatoes.

Have you riffed with the Rina in your life lately?

Posted by About Last Weekend at 8:58 PM