Heads up. If you don't like neon - best zoom off to another planet before March next year.


Because neon, day-glo, shocking brights -  whatever you call those irreverent Eighties colours - were the most predominant trend at Fashion Coterie in New York for spring 2012.  Bubble gum pink, Brazil beach orange, acid yellow and bloody bright green. These colours don't give a toss - and that's what I like about them.

I guess the only issue is - is neon going to date? Who cares? Fashion peeps don't think like me, a 49-year-old who's starting to think elastic waistband trou are quite comfy and practical after all. And I guess you could save your Day-Glo pieces for the next go-around in twenty years' time. Speaking of comfort and practicality - splashes from a smoothie? phhht! - this boiler suit at Desigual is a superb alternative to tracky pants.

There is no doubt about it - neon is strangely flattering to most skin colours and ever-edgy. There was full-on commitment at Nanette Lepore who is usually so restrained... 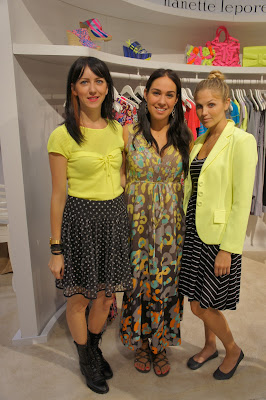 And just a touch on these Loeffler Randall shoes... 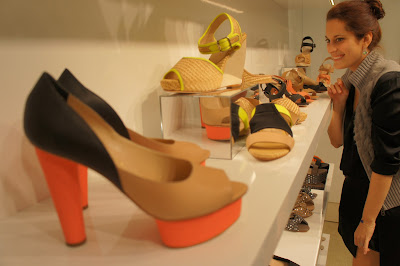 And even at the more woodsy, craftsy aesthetic of  Patterson J. Kincaid , this little deer found himself in a clearing of bright. 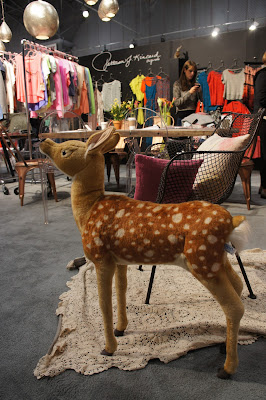 But at dear creatures, a spin on "sentimental tales of whimsy" they stuck to natural colours with classic capes in mustard and forest greens. 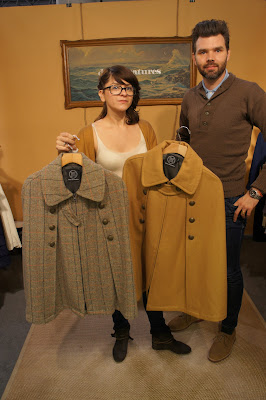 Sitting in the back was 25-year-old Smith Sinrod with her beautifully bright Thai silk pieces. It's slow for us, she said. Maybe it's where you're sitting? I replied. She looked so tiny and young and sweet and her Victorian-meets-Mod pieces so lovely I wanted to take buyers by the hand and lead them straight to her.

Another young 'un (she doesn't tell her age but she's early twenties) was Natalia Kuks Jacobs who covered all bases with bright South American prints and floaty romantic. (Another trend -  clipping a blond hairpiece very obviously on dark hair - looks fabulous on her. But I'm sure would be more Norman Bates playing Mother in Psycho.) 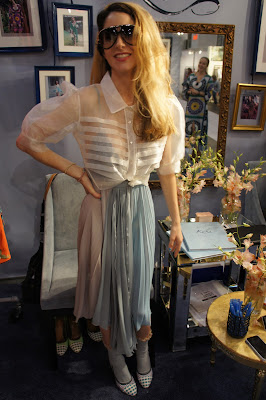 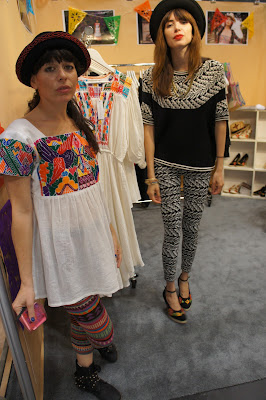 Outside the sensory-overload that is Fashion Coterie, I walked for an hour to St Patrick's Cathedral on Madison, which always has a wooded, stone and candle quiet. Outside on the streets, intermittently five, then ten, then 100 people would gather when a line of police and town cars pulled up. Who was it? One of the Jens? A Housewife? Then someone would say: "Oh, it's just someone from the United Nations" and the crowds would disperse.

The busiest place in town was around the corner on 5th Avenue, the new Hollister, a sort of surfer SoCal Abercrombie and Fitch. 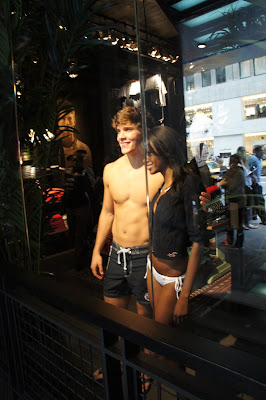 Greeting customers in the front were young men and women wearing just their togs. (swimsuits) People were streaming in. I can't remember if I saw any evidence of the day-glo trend, I don't think so. Turns out there's no need for neon when you're blinded by inhumanly perfect abs.

Posted by About Last Weekend at 11:02 AM