While we were in Lana'i, a tiny island off Maui, Hawai'i, the most profound thing we experienced - besides the waves which hushed the whining and scrapping for the time it took to bowl over four children - was the deep-seated peace of the Islanders. 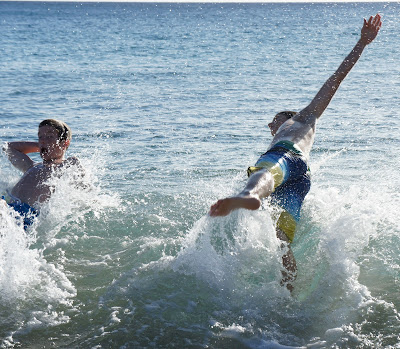 Many of them had lived there all their lives, on a comma-shaped island 18 miles-wide with no traffic lights, an outside jail and a population of 3,102.

The only two hotels on the island have golf courses and tennis courts and staff whose sole job it is to put towels on the chaises, clean sunglasses and spray Evian on sunbathers, who pay $15 for a fruit plate and $6.50 for a latte.

Meanwhile the front page of the Maui News showed Lana'i locals lining up for 1,000 gift bags containing turkeys and rice, which everyone agreed were much needed. Paid work is limited to tourism which is hurting like everything else.

Even if you have a job, or hopefully two, to pay the bills, the three small stores on the island stock few fruit and veg. The 40min ferry ride to Cosco in Maui is $30 each way for an adult, $20 for a child and most families need to stock up at least every six weeks.

All the locals we met agreed that everyone knows your business here, you have to grow your own food and fish if you want to eat well ....and they would never, ever, leave.

First there was Martin who took us out to see the dolphins. This is something he does everyday but when we caught sight of a horizon-full of dolphins leaping - they travel in pods of 60 - his joy was as new, wide and glorious as the grins on the faces of Cy, seven and Tallulah, 10. How do you live here, we asked, the island is so expensive. Yes, he agreed, a gallon of milk is $8 and he has three children who love milk. "That's the price you pay to live in paradise."

Jared, our shuttle driver to the "City" of Lana'i agreed. He was born here but rebelled in High School. After having a daughter at age 17 he signed up to work on Naval aircraft carriers and travelled the world for six years.  Jaded by city-life he returned to marry his girlfriend and now has three children and two foster children. He also mentioned the price of milk but said: "That's the price you pay to live in paradise"

One of the women busing breakfast tables was from Milwaukee. At age 18 she moved here with her mother and hated it, there was nothing to do. Ten years later, she loves it and intends to live here for the rest of her life. She has three children and she and her fiance, a bartender at the same hotel, are saving to be married in the hotel gardens. She says life here allows their children to roam freely with everyone keeping an eye on them.

We arrived home and the boys flew outside to play football in the backyard and Tallulah spent a happy day with her 12 soft toys making a movie about circus-life. (She even negotiated terms with the actors who will receive 1% of 100%. Someone wrote "great" on the deal but I don't think it was the actors).

The lesson is -  and I guess I'm hammering this moral home as clunkily as Alexander Payne's latest movie, The Descendants, which has the most annoying, preachy voice-over for the first half hour  - that kids don't need posh hotels, swimming pools and room service to be happy and we don't either.  What fools we've been!

I walked down to the deli at the end of our road to buy a gallon of milk - $6.99 before taxes... the price you pay to live in Oakland? No, that doesn't have the same ring somehow.

Anyway in the midst of my "money can't buy you happiness" euphoria, I may have sssslipped off to the sssales and bought this Yarnz ssscarf. I'm obviously too in touch with my new non-material self to feel completed by a mere piece of material. But my brown winter clothes are just ecstatic.


Any moments of truth for you over the weekend?
Posted by About Last Weekend at 10:06 PM