My youngest sister Pietra came to stay for just the weekend. On Friday night she spoke about her work to 60 people gathered at our house. Pietra has spent the last 20 years making documentaries, often following a specific person for up to two years. Her The Art Star and the Sudanese Twins, about the controversial performance-artist Vanessa Beecroft and her passionate efforts to adopt twin Sudanese babies, won awards at Sundance and around the world. 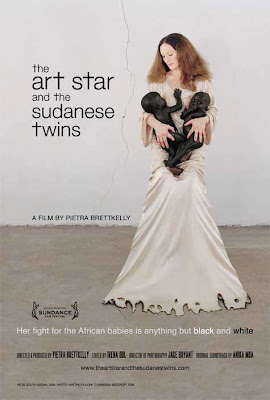 Her current projects include Maori Boy Genius, about a 16-year-old Maori boy's journey to Yale and The Park, a walled garden in Afghanistan (recently named the most dangerous country in the world to be born a woman) where woman can strip off the burqa and - she hopes - will reveal to camera their thoughts and dreams. And What To Do After Winning Two Oscars (a working title) about Indian composer AR Rahman who won two Academy Awards for his soundtrack in Slumdog Millionaire. He is setting up a music conservatorium and insisting that students from the very poor areas of his home town Chennai come for free.

She talked about traveling to Libya for her Beauty Will Save The World, in which Gadaffi tried to soften the world's view of him by staging a beauty pageant. And how she arranged the permission of a local warlord to hire all the males in a village in Northern Afghanistan to clear the side of a mountain and create an airstrip so she and her crew could get out.


She has met amazing people and has incredible experiences -  she has been fly-fishing in Ponoi, Russia, rode horses for five days in thigh-deep snow in the Afghanistan mountains and run the gauntlet of guns in an African airport whilst hiding her tapes.  "Scary stuff" whispered one of my friends: "but not as scary as driving a minivan of kids on a field trip."


But I can see it's a tough life. The travel is constant and often rough and dangerous and a lot of time is spent looking for funds rather than the core job of researching, filming and editing. Each film costs up to $400,000 and she must mostly fund herself, going into double mortgage and credit card debt before hopefully grants and investors come through...

More scary stuff the next night when we played broom-ball, a sort of hockey on ice. Don't raise your broomsticks we were warned ...and what was the first thing the men did? (And for the women: wear your high-waisted trousers or risk major whale-tail reveal.)


Pietra was back behind the camera the next morning - taking snaps of a surprise birthday brunch for my friend Lesley. Most everyone wore one of their Lesley dresses.


But in the end, Pietra found herself sharing the weekend also with The Simpsons.

Tallulah, 10, asked Pietra about what she was currently filming and Pietra told her about the Indian composer AR Rahman who most recently wrote the music for 127 Hours, the true story of a climber who fell into a ravine and had to slice off his own arm.

Tallulah's face brightened with recognition: "Oh yes, that was on the The Simpsons - except Homer chopped off the wrong arm."

Later in the day Tallulah heard Pietra talking about The Diving Bell and The Butterfly, the true story of a paralysed journalist who could communicate only by blinking.

"Oh yes" said Tallulah, "That was on The Simpsons too. But instead of blinking, Homer farted."

Pietra has travelled to the four corners of the earth. Had Tallulah absorbed all the same cultural references by simply watching a wacky, albeit brilliant, cartoon show? Thankfully Pietra was able to introduce Tallulah to a cultural phenom she'd never heard of:  Monty Python's The Ministry of Silly Walks. Thank you lovely.


Posted by About Last Weekend at 9:40 PM