A Kiwi reader mentioned the other night I never warn you I'm heading off...I'm simply suddenly there. Bloodyhellsorry, done it again. We're in New Zealand for two weeks, guys. First in Auckland staying with my friend Sue for two nights, then tramping (hiking) in the Coromandel Peninsula for four nights and then home to Ohope Beach in the Bay Of Plenty.

At Ohope, our kids sold (bit runty) Christmas trees on the side of the road for $10.  Initially they weren't having much luck. Cy, seven, having watched of lifetime of Disney TV, knew all about incentives and salesmanship, "Let's give cookies too" he said and when they went door to door: "Take me, I'm the cute one!"


It's been a funny old trip. Loads of things about New Zealand (sometimes pronounced Nu Zild) have changed...

I Scream: There's even more ways to scream your way through the day, as Tallulah and I found when -  straight off the plane - we jumped 750 ft off the Sky Tower in Auckland. Have I ever mentioned I am terrified of heights? I've done sky diving (with a hangover, natch) and bungy jumping. But this is scarier  -  you're jumping into tall buildings and concrete streets. Shamefully I pushed in front of Tallulah, 10. I knew if I waited any longer I would pike (pull out).  "The guys here will look after you" I told Tallulah as I headed out to the gangplank. Yes, there have been prouder moments for me as a mother...

Dog Day Afternoons: The security dogs at Auckland Airport can sniff out anything. Including Cy's three-day old spaghetti bolognese school lunch which had just a touch of green fuzz on it. Poor Cy, seven, bawled when the dog barked at him and a whole building-full of travelers turned to glare.  We rounded out that sterling first impression when Kevin declared his American health bars to customs officials, joking: "Just a little something to bribe you with."
"Sir, there's no bribing here!" the customs guy told him sternly.  I moved away from Kevin, fully prepared to disown him. There have been prouder moments for me as a wife...

Kiwi "chucks" (chicks) no longer keep their good clothes for best. Pietra's friend, Joanna cooked a chicken lunch for 14 in this gorgeous silk gown and stacked sandals. Staunch. When she lived on Waiheke Island she sipped one reviving glass of champers (just the one, mind) at breakfast a la Coco. 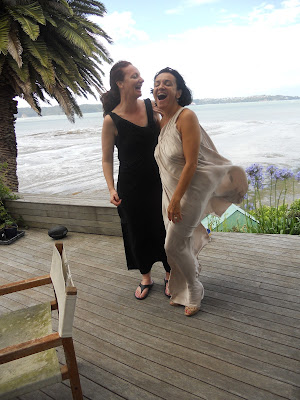 And some things never change...

Retro domestic moments:
I never iron at home, so why am I ironing tonight?

Kiwis trust you: Kevin walked into tiny old gold-mining Coromandel Town and told the bank teller: "I have an account here but I don't have the card...or the account number...and I don't really know what the account is."
"Oh no worries at all" the teller said "Just sign this form and I'll do the rest. How much would you like?"
$600? ventured Kevin.
She'd already pushed the cash over to him before he had the chance to hand over his ID.

Good old Kiwi ingenuity. 22-year-old Roxy noticed a small alleyway next to her parent's fish and chip shop in the surfing mecca of Whangamata. She then found a shipping container in the back of her parent's shop. She moved the container into the alleyway space and Roxy's coffee house Barside was born, the "best coffee in Nu Zild" according to everyone we asked.


Sweet As. "As" means "Very".  As what? my kids asked their Kiwi cousin Finn, 12.  And what words can you can tack "As" onto? Everything, Finn said, it just has to be good...as. You can also say "Awesome As" which Cy was keen to throw about willy nilly, thinking it was "ArseAs."

The best Kiwi parties always end up in the garage. Here's a classic at my cousin Barry'n'Sue's in the spud (potato) growing town of Pukekohe.

And everyone stays the night...


(Big news here today. My sister Pietra just found out her latest documentary, Maori Boy Genius has been selected for competition at the Berlin Film Festival in February. "It's been a long, hard struggle and it's cost me everything, so it's great to find it all worth it" she says. )

Happy Holidays everyone!
Posted by About Last Weekend at 1:46 PM