Shoes on the Streets...of London

On my brief stop in London, on my way back from Berlin, the snow had melted but most people were still wearing big ole' boots with many, many layers.


Just outside the British Art Museum, art student Amy was clutching some grey leather to transform some pumps into unicorns complete with horn and mane. She calls her style "part fantasy, part Harajuku gone mad.... and all pink" Her lace-up boots "from some market somewhere" and her tiara: "Oh I didn't even realise I was wearing one!"

Photos from London Fashion Week showed off-duty pictures of models wearing their boots with denim cut-offs. Funnily enough the rest of the population declined to expose their bare legs.

What I've realised is the average Londoner - whatever their age - take fashion risks. They seem not too bothered about appearing coiffed and "cute" but rather aim for the interesting and off-beat.  Flea market, main street and designer all get a fair share of the wardrobe. As one friend says: "Sometimes I look a bit cat-lady chic but that's all part of the fun."

That good-natured couldn't-give-a-toss-about-the-matchy matchy has also seeped into the restaurant decor as evidenced by The Zetter Townhouse in the cobblestone streets of Clerkenwell. This is where I met Kate, my Kiwi friend. At the Zetter you feel you are dining at the home of your eccentric old aunt, with a stuffed kangaroo peeking out from the corner, worn winged-back chairs, wafer-thin cocktail glasses and mis-matched plates.

The cocktails are mixed with tinctures, bitters and herbal remedies and I definitely felt a little finer after one...or two. "Supper bowls" of nursery food such as fish pie make you feel old-school posh and longing for the Nanny Crawfie you never had.

Kate and I agreed we were in the glorious shape-shifter years (nearing 50) and opting for looser tops. She wore a Day tunic with tights and her Miu Miu biker boots.

Further back in time this couple were posing in Hyde Park for a new TV show called Teen High. Not sure what the era is supposed to be...

Next day I was transported to Europe in the Sixties at Leon's just behind the Tate Modern. All Mediterranean oranges, vintage chairs and family photos in Cairo. More modern is the nutrition ratings on the dishes including eight kinds of alerts about things like "Glycemic Loads" which apparently is the quick and the bad sugar. This means you are instantly appraised of how very swiftly that brownie - though locally sourced and lovingly baked - is going to stick to your arse.

I was meeting my old journo friend Catherine, who used to be a health editor for magazines and has now set up an ingenious new website called School Guru, which ranks schools. She, her husband and two boys have left London for a more peaceful life on the sandy beaches of the Isle of Wight where they are remodelling an old guest house. 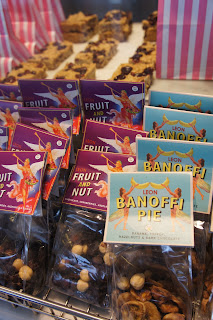 Back in Queensway, I had dinner with my old old boss Anne and her family. Anne told me that the hot new cuisine in London is American BBQ, sliders and pulled pork. Anne is now editor of The Times' property and money sections. She had just written about duplexes in Belgravia selling for 46.5 million pounds. Generally I found the flat prices in west London more than double what they were ten years ago.


Anne is that increasingly rare creature in media; a top-rated journalist who is also kind and decent. We ate in one of the excellent chinese restaurants off the reassuringly still-scungy streets of Queensway, the last hold-out against gentrification. I forgot to ask Anne how she's kept her cherubic looks; I assumed there's an aging portrait in her attic...

Another friend Emma says she has a good solution (on the aging thing...) Emma and I spent hours and days and years together wheeling babies up Portobello Road and around Kensington Gardens. I'm very cynical about supplements but a couple of years ago Emma started selling Imedeen after one of the products cleared up her eczema.  Last summer Emma gave me three months of Imedeen to try (formulated in Denmark and not yet available in the US). I really think it plumped out my skin and I went straight to Boots and bought four month's worth.  Both Emma and Joanna Lumley - who endorses it for free - are pretty fabulous testaments.


I arrived home as odiferous as a German backpacker, or fair dues, a Kiwi backpacker. Truthfully I hadn't missed the kids at all and hadn't thought about them much either. Then I caught sight of Cy's smelly size two sneakers at the door and felt a little pang.  But just let me enjoy my final hour before his other pair of (filled) stinky sneakers arrive home...


Posted by About Last Weekend at 7:05 AM