Asses of the Pyrenees

Okay, this is the last of my inappropriately-named blog posts, promise! And when I say Asses of the Pyrenees, I mean the donkey kind. Although it was head-down derriere-up on our bike ride tracing some of the Tour De France. For seven days from 9am to 7pm, puffing up grades of sometimes 27 (trans: les bloody knackering), only stopping to woof down a grit-dusted roll from breakfast. But my point is - all I saw for hours was pretty much the asses (or donkeys, what's the difference?) on the sides of the roads.


Do you ever look up? said my mother from the support vehicle. Make sure you look up sometimes and look at the views. (As a little aside, my legs and rearage were dotted with the vicious bites from the flies that travelled with the asses. Quelle atractif!) 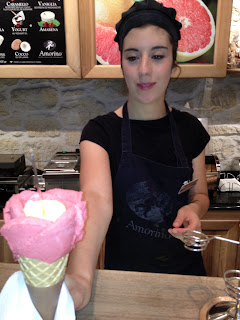 We were a motley crew of ten (including my parents) seven of us cycling and three in the support vehicle.

*Ignorance is bliss: If we'd really thought about this trip Kevin and I would have realised we were totally unprepared. Oh well, it was torture but we finished. My "takeaway"? (Sorry I hate that word) Don't think about things too much, just sign up.

* Good on yas, Tour de blokes: I have a new found respect for the Tour De France cyclists, an event which previously had never piqued my interest. We took three long days to complete what they ride in one short morning.

* Bon Courage Papa! My 76-year-old Dad cycled much of the trail with us, completing the 5,607 ft Col d'Aubisque.... after two beers and a hearty lunch. What's his secret? "To be honest, genes and good luck...some of my friends could not do this but they can do Sodoku." Training? He has ridden the same mountain bike around the beach for 12 years and occasionally enters events with his retired mates on their three-speeds. And of course his bride of 52 years, Madeleine, was in the support vehicle to cheer him on.

* The Pyrenees is not the prettiest sister of the bumpy areas of France: If you want to be beguiled and enchanted best opt for the castle-clad lushness of the Loire Valley or the lavender loveliness of Provence. But for challenging mountain ranges, the Pyrenees. There the roads are empty and perfectly paved, the motorists are unfailingly polite and patient and the hoteliers are happy to see you. One even offered to do all our washing; oops, pardon Madam I didn't realise you only meant cycling stuff. (You can take the girl out of New Zealand....)

*As usual I brought way too much luggage and, as usual, ended up wearing the same thing every evening.  This Oakland dress emerged as my "dinner" uniform, replaced mid-way by a stretch lace dress bought in Niaux sales. My takeaway? Don't bring too much to France, they have stores there.

* There is no doubt about it, everything and everyone in France is jolly charmant. Even something as banal as road signs make you feel you are chaised in a Marie Antoinette salon with a gob full of bonbons. No road marks becomes - "absense de marquarge."I saw a group of scruffy road workers lay a table with a cloth, glass tumblers and wine for their lunch.

* We left the kids at home with a babysitter. Never mind the grueling hills...Kevin and I have spent 14 years in the trenches (both of us calling, er, barking orders) bringing up four kids. Out of the trenches would we actually have anything to say to each other? Turns out we can still have a good laugh over an apres GeenandToneec and keep the lines coming.  And there is no other lycra-encased arse I would rather be following.... 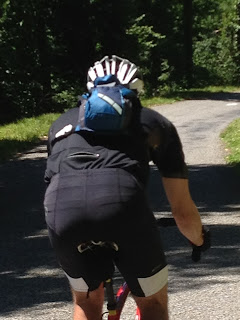 Posted by About Last Weekend at 9:03 PM