The pilgrims might have landed on the wrong coast it seems. It was 60 degrees and squintingly sunny here yesterday on Thanksgiving with both our hibiscus and magnolias blooming. We tried for a laid-back Californian Thanksgiving this year...which to me meant doing as little as possible. 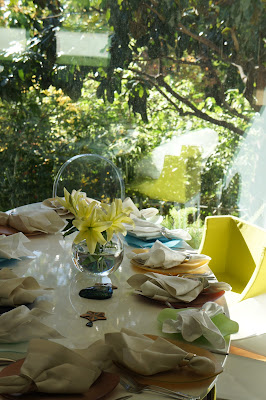 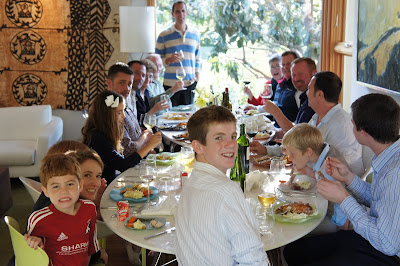 This might be sacrilege to some but we had a cook-for-hire, Erin, drop off eight sides including my favourite, sweet potato with marshmallows on top; we picked up pies from Market Hall (they had finger holes in them by dawn) friends Mike'n'Kenny made chestnut, celery and apple soup and cousin Mac bought all the wine.

All that was left to do was cook the turkey and I handed Kevin that privilege. We don't cook well together and many is the time guests have arrived and I've said: "We just had a huge marital." Of course I meant big scrap, but I stopped using this expression after a friend confessed she thought it was something totally different...

After much research, Kevin ordered an organic bird a week ahead. Turns out there are five grades of organic and he chose the top-level turkey called Fred who practised Ashtanga in the mornings, followed by a gentle sips of lapsang souchong tea while reading Camus.

The trouble was Fred was too fit and fat-free and without the pumped-in water there was risk of drying out - to brine or not to brine (we didn't).

There was going to be 11 adults and six children including our four. Kevin's father, Bob and stepmother Patty arrived from Pennsylvania, Kevin's Aunt Mary came from Kansas, his brother Dave and his partner Adam flew in from Denver and Kevin's cousin, Janelle, and her family drove from Tiburon.

Great Aunt Mary is the family historian and she told us that our Tallulah, 11, is the spitting image of her great-grandmother who was half Sioux. Funnily enough Tallulah's name is listed as both Irish and Native American Indian for leaping water.

Kevin set his alarm for 8am to start "basting his bird"every half hour (Gosh, how we did laugh about that) We searched that dang creature for the bagged-up innards, found under the skin today.

Grandpa Bob and the Uncles played catch with all the kids, the turkey browned so perfectly it looked like it came from Central Casting and I drank too much of the plentiful grape. Thanks for the Grandpa, for an Auntie who knows every corner of the family and for friends who make soup. And for online friends like you who alway bring those magical sides.

Posted by About Last Weekend at 5:16 PM