Havasupai Falls in Arizona. We were supposed to be going here.


Had we just travelled two days to the wrong place?


There we were... 11 families, the youngest child just seven years old. At the top of the Havasupai Canyon  loading our bags onto 22 mules for the six-hour descent to the camping ground. The skies opened. There was lashing wetting rain, crashing thunder and lightening - and hail the size of golf balls. My lip started wobbling...until I heard something that raised my spirits.

It was a group of Brits huddled together in rain ponchos and carrying enormous backpacks.
"This is nothing! Remember that time it rained two weeks straight in the Lake District?" Laughter and more cheery anecdotes.
"Luxury!!! What about the time it snowed for three weeks in Scotland and we stayed in that place that was colder than outside?" More delighted chortling.

The forecast had been rain but I was thinking warm Hawaiian drizzle. It was time to put on my Big Girl Pants. C'mon, I told myself, there's a seven year old girl doing this! 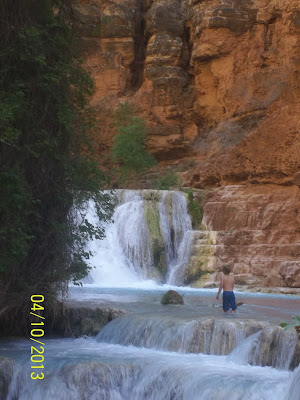 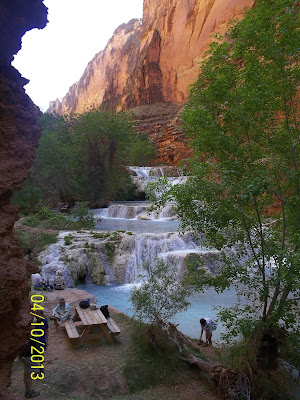 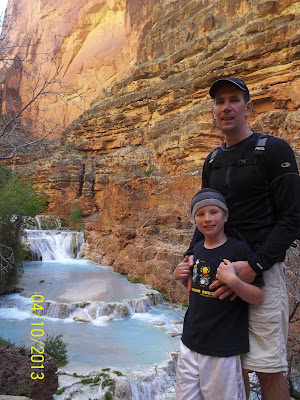 At the end of a long day we reached the campground which was basic, clean and well maintained. Around us was a wonderland of falls of up to 120ft. The water was a Caribean blue-green - a result of the high calcium content. White sandy beaches, cottonwood trees and towering red rock canyon walls completed the surreal lush-moonscape.

I must be the most Un Kiwi person alive -  the truth is I hate camping, there's the sweaty swishiness of sleeping bags, I don't mind the loos are long drops but they're 100 ft away...and if you're not doing something helpful, you feel like you should be.

The fun side of the "rustic" was that we woke to a strange stomping, turned out to be a naughty horse getting into our garbage and scrunching on all the fruit. We had two friendly dogs who sniffed us out too. No wonder: our meals included bacon and egg breakfasts, hot cocoa hand-made in El Salvador and cauliflower, garbonzo and five-spice chicken. We had bought so much that we left five large boxes of food for the villagers.

Did we feel any danger? We'd been warned that though alcohol and drugs were banned on the Supai Reservation, alcoholism and meth addition has led to violent crimes. Apparently tourists have rarely been affected by these crimes though, with the one tragic exception of a Japanese women who was brutally stabbed in 2007.

We found the campground staff helpful and friendly. Fidel Jones, who cleaned the toilets fashioned a make-shift drum from cleaning supplies (a cleaning bucket and sponge) and taught us traditional songs and dances.

To be honest, my biggest worry was how I was going to get down Mooney Falls, a slippery, sheer 120ft cliff with only chains to hold on to. One slip was certain injury and possible death. I still can't believe we all did it. Again I was spurred on by the thought that a teeny seven-year-old girl was climbing down without complaint.

As we tramped out of the Canyon on the last day, I mused that usually in any group situation there emerges one annoying person who unites the rest. In our seven days together that annoying person never emerged. Until I realised. Oh heck, it might have been me...

If you go from the East Bay: Two days of nothingness. Drive in a straight line for four hours to Bakersfield ( DoubleTree Inn is a good option) Next day turn left and drive six-eight hours to Haulapai Lodge in Peach Springs, an hour from the trailhead.

If you go from elsewhere: Fly into Las Vegas and drive three hours to the top of the Canyon. On the way is Skywalk, a see-though circular walk out over the Canyon. You can't miss the turnoff, there's a place offering the chance to shoot automatic machine guns(!) The Hoover Dam is on your way too.

Outrage and sadness this week. And deep admiration for those who are reaching out selflessly to help others. Boston.
Posted by About Last Weekend at 11:01 PM