Ooops it's taken two weeks to post about my vacay, a record even for me. The longer I left it, the more scary that blank page became. Kevin and I left the kids with a babysitter and spent nine days in Jackson Hole, which isn't in Big Sky as I said in my last post - it's in Wyoming. No wonder I never became a travel journalist... 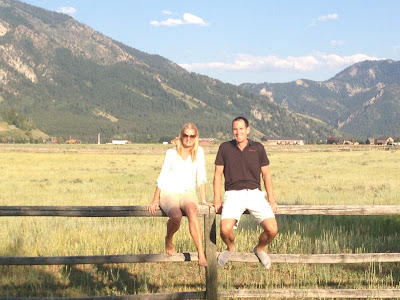 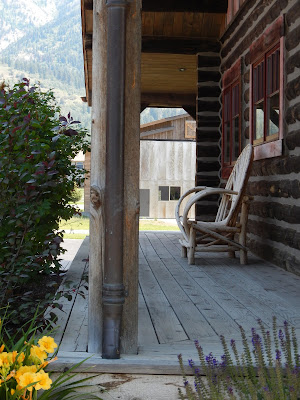 We spent five nights in Jackson Hole, staying at the Rusty Parrot and the rest of the time in Alpine (pop.2,500) an hour out of Jackson Hole, staying with friends Marion and Jack. They live on a airfield where all of the residents have a hangar and small planes. The first night we flew to dinner 20 minutes away in Idaho. It was a restaurant on another airpark. Faancy! Harrison Ford lives down the road. Faancy!

Actually Marion and Jack are not at all fancypants people. They worked many years on the Chicago Mercantile Exchange, Jack as a livestock trader and Marion as a milk trader. Now they live in Alpine for six months and in Ohope Beach in NZ for six months where Marion and I are both from. Eight years older than me, she was the cool girl at school and while I was putting enormous amounts of hours into sunbathing and making cinnamon toast at home on a Saturday night, Marion spent those same hours becoming a great surfer and making lifelong outdoorsy friends.

*Most afternoons featured a dramatic thunderstorm and torrential rains - there's a reason this place is so green.

*You'll feel strangely exhausted when you get here. I didn't realise its at 6,200ft ft and spent the first day having a Woody Allen movie-thon in the hotel room (the thunderstorms also give you a good excuse for that.)

* The lamb and the venison-elk on all the menus we saw is from New Zealand. All the seafood and fish is flown in from Alaska.

*Jackson Hole is one of those places, which besides being stunning and full of wonders, is incredibly expensive. (There is even a store that sells what looks like authentic leopard skin jackets) This is the home of the $57 bison steak, the $150 white water rafting trip, the $30 funicular ride and the $300 van tour of Yellowstone Park and - and if you don't have a wonderful friend like Marion to take you fly fishing - that can cost you up to $1,000 a day with a guide.

*You'll see all the extremes here. On a four-hour vertiginous hike up a mountain we saw a runner and then a Mormon family of six carrying their gear up in a homemade plywood cart, behometh packs on their back and pushing one of their toddlers in a stroller. When the cart fell down the cliff we helped them retrieve the contents which included axes and hacksaws, stoves and inflatable rafts. They were incredibly cheerful throughout.

We saw billionaires in jets and people who live in trailers - the one elk they're allowed to shoot is a whole year's worth of dinners.

Best food: fresh donuts from the Snake River Grill, Tom Yum Goong from a Thai place in the an alleyway in Jackson Hole (sorry can't remember the name) and elk burgers made by our friend Marion.

And finally, a real life field of dreams story. A Kiwi David Cadenhead who did well in real estate in Jackson Hole has built a rugby field in the middle of nowhere. He is hoping that rugby teams will come from around the world and train at altitude. Good on ya mate.

Sorry this post looks a bit of a mess, Jackson Hole was a mish mash (pronounced mish maarsh in the US)) in a good way. Have you a vacay like that this summer?

Posted by About Last Weekend at 6:50 PM