The Streets of the America's Cup

What's San Francisco like? I was asked that a lot last night at a gathering of New Zealanders in the Waka (an enormous Maori canoe) in San Francisco for the America's Cup. It was meet and greet for all the notable Kiwis in California. So how did I get in? The classic Kiwi way...my friend asked: "Oh yeah could I bring my friend Jody too?" 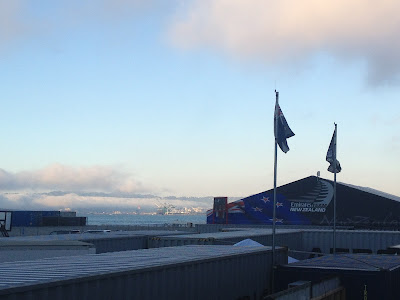 Kiwis get really mad when it's suggested they might know another Kiwi, but last night I spotted: an old boss from Radio New Zealand, an old flatmate and an old childhood friend from Whakatane! Anyway - for all you visitors to San Francisco, here's a ten pointer to explain a few things...what would you add?


*Fancy reception: That guy you're talking to dressed in a holey shirt could be a Dot.com millionaire who owns the company. Or a student who wandered in for the free drinks.

*Beautiful clothes in the stores but no one's wearing them. I am not the first person to notice this. Dame Edna Everage famously said it first.

*Everyone says there's still a downturn, so why can't you get a seat in even a mediocre SF restaurant on a weeknight at 6pm?

*Likely to overhear: “Mom and Mama are taking me to movies tonight.” “Oh cool, my Dads took me on Saturday night.”

*Everyone's talking about....A name for the New Mission, the place above the 22nd where all the new restaurants are going in.

*The cyclists who had custom $5,000 bikes in their garage now ride a fixed-gear bike.

*Don't say: “The coldest summer I ever spent was the summer in San Francisco....” We. Know.

*Don't ask anyone in the Steampunk Culture about Burning Man. No one admits to going anymore.

*I know, people never seem to be working here...they're always exercising and hanging out.

*The British “I'm on gardening leave” is replaced here with “I'm between start-ups.”

Posted by About Last Weekend at 6:52 PM