Camino - All About Lunch

Okay final (promise!) post on Spain before we hit Londinium for a brief day...It wasn't all soul searching on the Camino. We had a few giggles too. One of the funniest things was when we discovered Kiiwis and Aussies used the word "lunch" in different yet spookily similar ways. 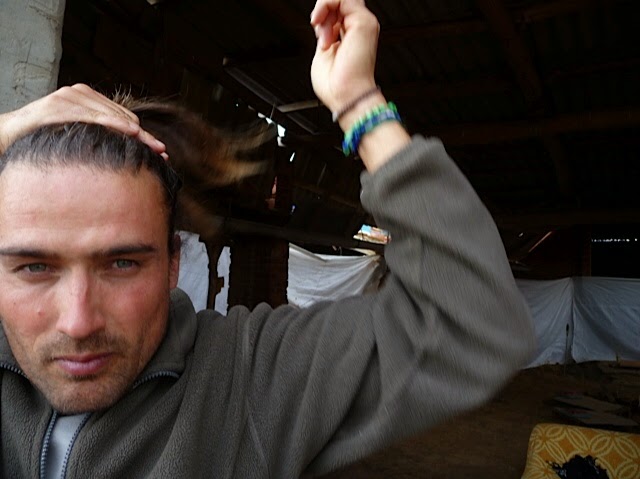 This is a picture of David taken by my sister Pietra when she did the Camino five years ago. We saw David this time in exactly the same place on a lonely dusty road 6 km out of Astorga.

His bed was just beside the path and he offered drinks and fruit and muesli for a donation. He was a gentle chap and as stunning as a movie star though my photo here with Pietra doesn't do him justice. 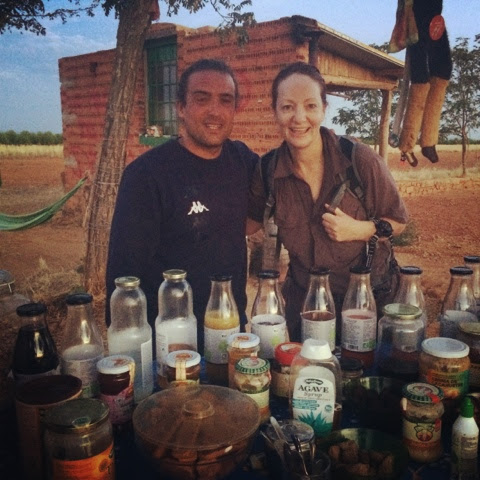 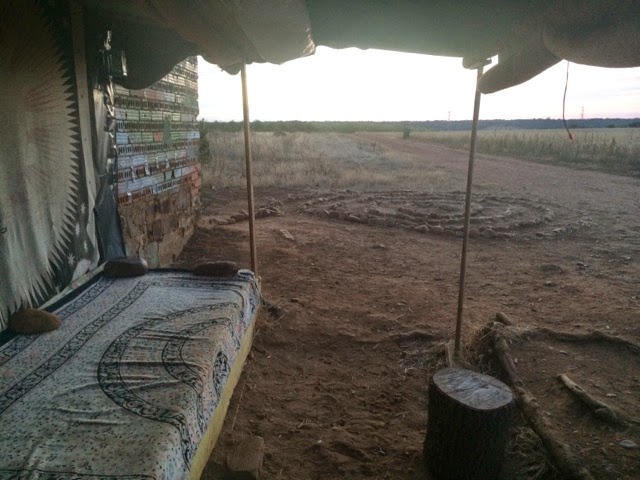 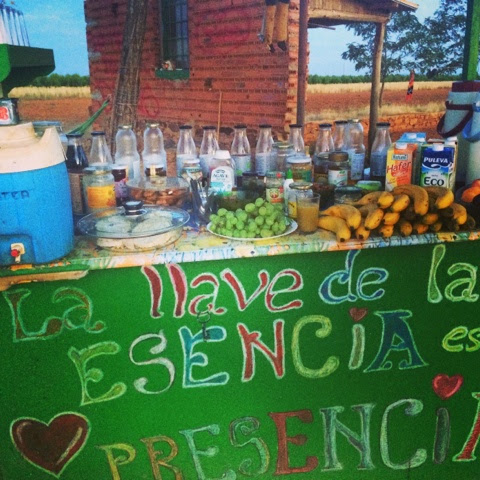 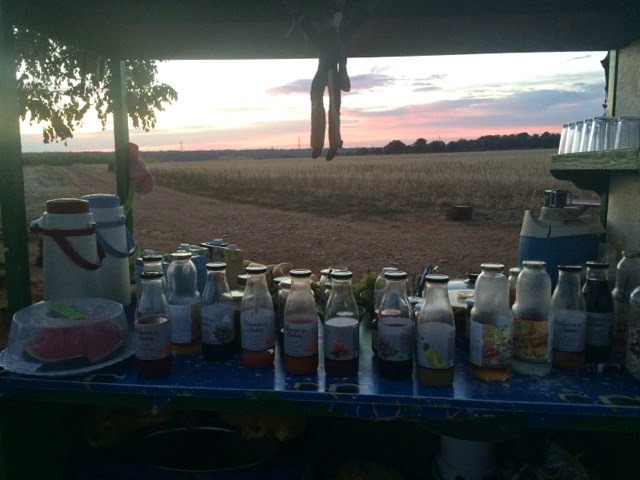 There is no water out here, he has to carry it in. 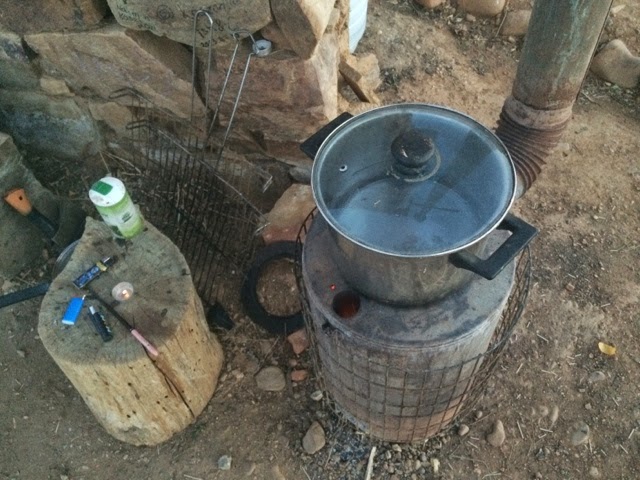 I guess some people can't live in the real world, they choose fleeting, five minute relationships without conflict but they are totally present and engaged in those minutes.

David referred to himself in the third person "David hasn't gone to Barcelona in four years" (his two children are there). It was hard not to start doing the same: "Jody went to Barcelona once"

Anyway David is a free spirit - including such details as his sarong which framed rather than covered. Five years ago Pietra's Aussie friend said: "You have to get the cut lunch in the photo!"

That was interesting because that same night when there was no room in Rabanal we slept in a dorm room with 40 others, mostly Spanish male cyclists wearing particularly thin and shiny lycra shorts - "showing their lunch" as my Kiwi friend Mike would say. (No visual on that, sorry).

More lunch related things: one day I walked with a Chef from Fulham whose job it was to make lunch for a man who is the largest property owner in the UK.
Outside the office ( the most expensive one in London, natch) sits the same homeless guy every day, and he and the chef have a good old chat in the mornings. Can you believe one day the homeless guy was given 200 pounds by the Ecclestone girl's husband. Then he was given 150 pounds by Kate Moss. He hurried off to the nearest travel agency and bought a plane ticket to Ibiza.

Finally, on this flimsily lunch-themed post, whaddayaknow when we got into Santiago the first thing you see in the main plaza are these statues. Back and front views 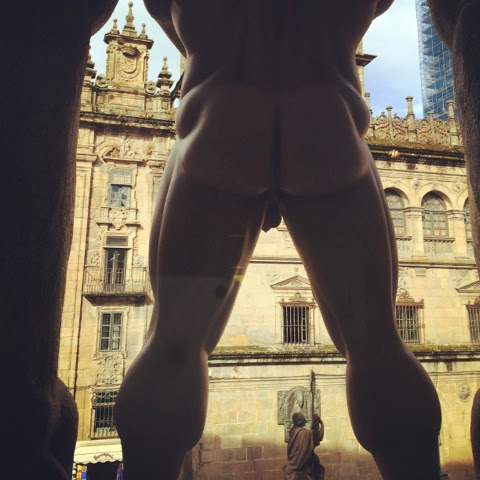 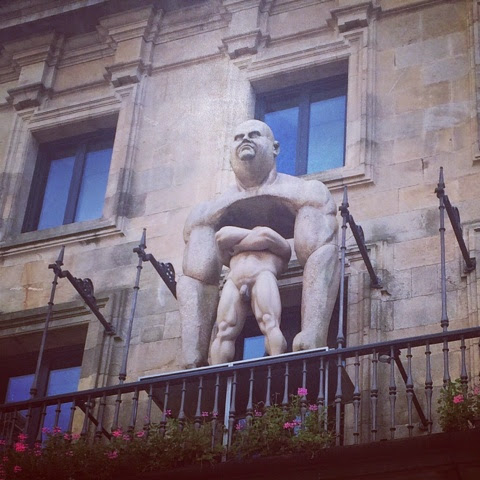 The other side of the plaza. 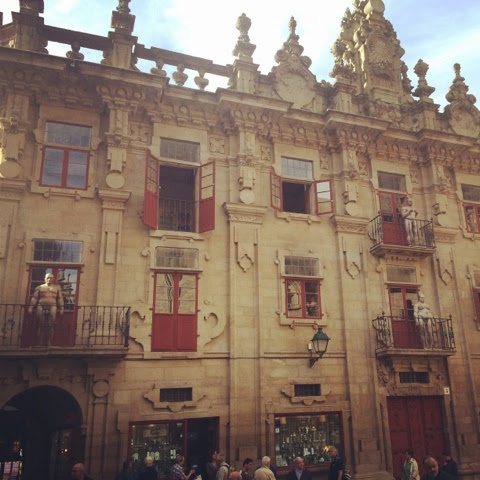 Close up of the left hand side statue to make the point ( scary, but just remember it's art). 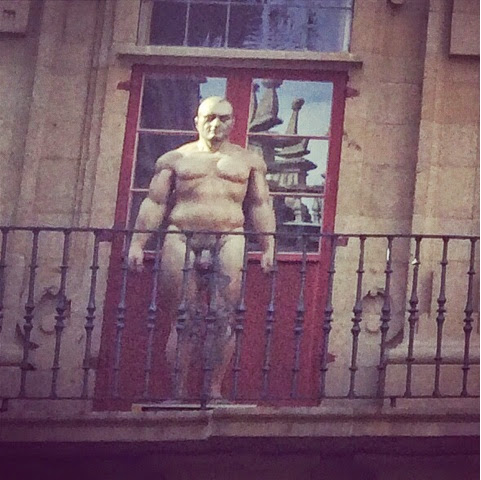 So your turn now on the edification and elucidation. Please tell me what this all means.

Posted by About Last Weekend at 2:23 AM