Our house: The Entrance, where you come in 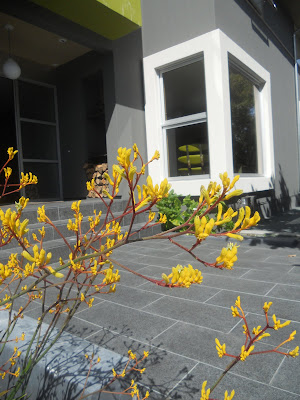 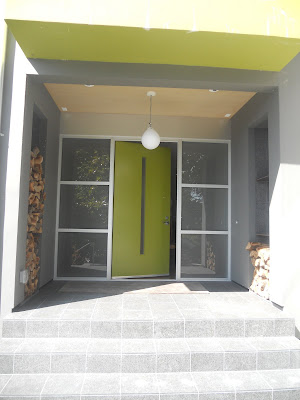 Coming up the front steps of our house,  you do get a
bit attacked by the kangarooo paws (plants not animals). But after untangling yourself,  it's a straight run though the green door.

One of the most practical parts of the entrance is the built-in steel firewood cubbies on either sides. They were designed by our architects Russ Dotter and Wencke Soljeld, a husband and wife architect team in Oakland, who are very keen on ways to display your firewood, both inside and out. It's perfect to have the wood so close to the living room because in winter we have a fire twice a week for our yoga class. Stacked logs always look stylish and warm whatever your style. One of my favourite blogs, Remodelista. com features an outdoor fence of stacked wood. Our entry is not crooked. It's just my photographer. Will let Cy know he's fired as soon as he gets from Kindergarten this afternoon.

We get our wood from Bear Bottom Farms in Richmond which I keep mentioning to everyone, just because I like saying "bottom" for a reason. 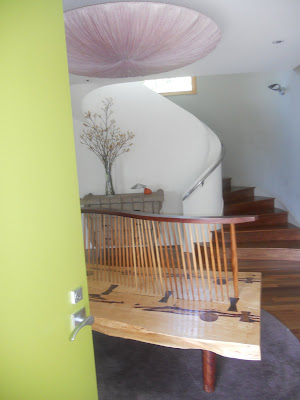 Inside, you first see the curved tamarind wood bench, made in Sumatra. It's the one piece in the house that everyone likes. It's nice to sit there or hover awhile, especially now I'm losing my mind and I can't remember which room I was walking to. The rope chest is from France and holds all our plates. When I saw the pic of it, I assumed it was some hippy guy in Sonoma sticking rope onto everything. In fact it was made by a former fashion designer in Paris. Did it make me want it more? Sadly, yes.

The floors and stairway are Australian Spotted Gum, a tree found commonly growing in Australia which I suppose might make it a decent eco choice. But then it has to be shipped from Australia which makes it not. It has proven brilliant in disguising dirt and scratches as its so varied in colour, from oranges and reds to greens and browns. 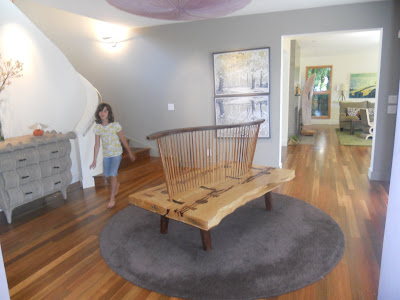 Like the log-stacking, the stairway is about opting for the most simple and least expensive option. Previously there was an old Seventies-style wood banister. Steve Strand Builders filled in the stairway, high-lighting the curve that was already there and added more swoop to the roof. My friend says it looks like a tiny Guggenheim. This photo shows Tallulah walking through the entry, with the living room in the background. She's wearing one of her 17 pairs of cut-offs. Jeans don't stand a chance with a nine year and her scissors. The reflecting photos of central park are by Sarah Davis.