It's vital to have a friend who prods you to see all the plays, concerts and gallery shows. Left to yourself you'd opt for a night at a restaurant. Or am I just speaking for myself?

When I lived in the centre of London in Notting Hill for 15 years, we used to joke that we could never move to the country because we would miss the opera so. (Number of times my bum touched a seat at the opera: once - and I fled early for a nearby bar). Which is not to say I'm a complete philistine, I love lectures and music and some dance (yes to Mark Morris, but no to ballet after seeing the Kirov Ballet; dancers too thin to be watchable) 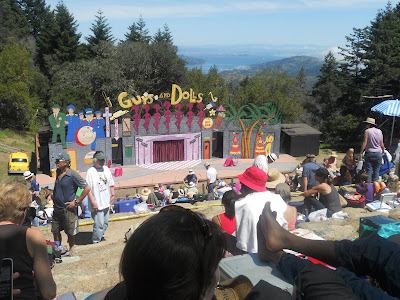 The culture dealaah in my life is Wendy and she suggested the Mountain Play many moons ago.  Apparently the Mountain Play is held in the most glorious area, a natural outdoor amphitheatre at the top of Mt Tamalpais,  just before you hit the wide white beaches of Stinson Beach.  This year it was the musical Guys and Dolls, the 1950 tale of craps-playing gangsters and their "dolls".  It was just me, Harley(12) and Tallulah(9) as the rest had baseball.

The day came and I was not excited.  But I was excited by the time my blue minivan was crossing Richmond Bridge.  Yes, the view of Mt Tamalpais rising above the very blue Bay was uplifting. But the really astounding thing was: my two kids were actually having a conversation. Granted it was about the clown fight episode in Malcolm In the Middle but they were talking, not bickering. We've realised that if we take even one child out of the mix, the others get actually get on.

We parked at Mt Tam High School, which looks straight out of central casting. My two kids ooh-ed and aahh-ed about how fine the school was, the pools, the tennis courts, the shiny steel sign! (That is the best thing about going to an Oakland Public School, kids don't get spoiled for facilities)

After a vertiginous yellow bus ride up to the Mountain Play site, more ooh and ahh-ing. The views were worth the long and winding road. And the curves of massive serpentine stone provide seating for up to 4000 people.

Sitting on the stone seats of the amphitheatre, Tallulah and I realised we were both the stripey "dolls" that day, me with handbag and shoes from Sayulita in Mexico and her with tights from Gap. 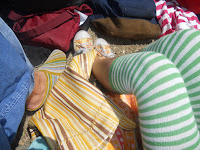 We were pretty well acquainted with those rocky seats after four hours, our one guy, Harley, and us stripey dolls. I wanted so much to like the musical and tapped along.  At one stage I ruefully reflected on an old London friend's pronouncement on musicals: "The truth is: they look more fun to be in than to watch".

After too many American Idols we're become overly harsh critics of pitch and delivery. The truth is: the players gave their all and the lines are still hilarious.

Tallulah and I are still singing "Marry the man today -  and change his ways tomorrow!".  The whole song is worth learning: "Marry the man today, give him the girlish laughter, give him your hand today and save the fist for after!" I might even change my ringtone. And how, even in 1950, did they get away with calling the dancers "Hot Box Girls"? Genius. 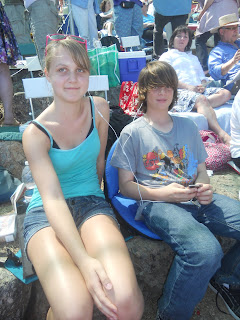 Harley and his schoolfriend Tassia listened in their own way: with one ear. Their other ear plugged with Iphone speakers.
Posted by About Last Weekend at 9:16 PM