What is it to be a Californian?

The best person to ask is Cameron, who was my first friend when we arrived here in Oakland eight years ago.

Cameron's father spent his early years playing in the backlots of Universal Studios in LA and her mother's childhood home is now part of Montclair Park in Oakland. 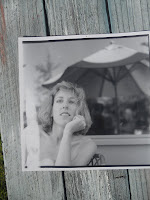 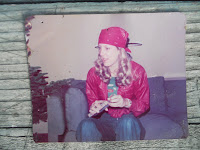 Today, Cameron is turning 50. (My brother in law, Dave says "50 is the new youth of old age"). She is holding her party at her Aunt's 200-acre ranch, 40 mins west of Oakland in Castro Valley.

There is something about these old photos of Cameron, in her early twenties, which feel so Californian. What is it?

She was brought up on the Peninsula and lived much of her adult life in Oakland in Northern California (Norcal), where people pride themselves on keeping it real. Now she's down in glamorous Pacific Palisades, LA.  So a mix of granola and Birkenstocks and false-boobed blondes on beaches?

Cameron dispels all cliches and always has. This a women who has travelled the world, has lived in Morroco and Japan and is fluent in the languages of both as well as French. She always has great stories. In Africa she travelled with a Japanese friend. After hiking for days through desert, jungles and rivers, she and her Japanese friend came upon the remote village they had read about. The chief took one look at Cameron, 5'10 with her blonde hair and blue eyes, towering over here petite Japanese friend and pronounced through the translator:  "Welcome! You have to be sisters!" 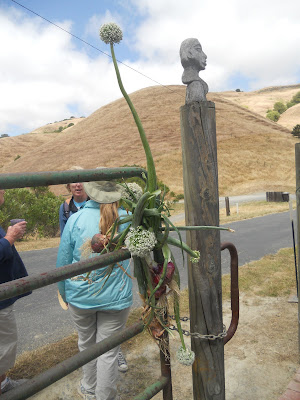 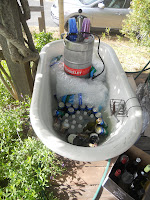 Back here in the hills, it's strangely cold today, peaking at 60 degrees at 2pm. I love the small touches like the sprouted onion twisted around the gate and the bathtub of keg beer and wine.
Because of the cold we all rearing for the hour-long hike up the hills with views of San Francisco and a nudist colony in the valley. We don't spot any nudists today. Do you still consider yourself nudists if you're bundled up in coats? 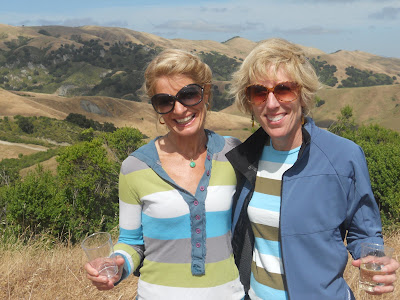 At the top of the hill, we stop for Cava and toffees and blackberries, then sprinkle some windflower seeds on the way down. Pic above finds Cameron (right) and I both stripey girls. Do you start dressing like your friends too?  The kids drive past in the old rusty truck and wave see you later. 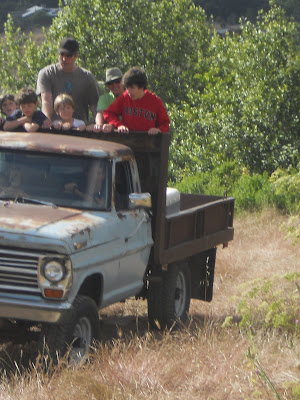 We bundled up in coats and hats. The wind somehow made us more than a little silly and we laughed and laughed about nothing. Dinner was BBQ ribs and tri-tip with potato salad. Followed by skits by  Camerons's three brothers and we all sang "Feeling Groovy". 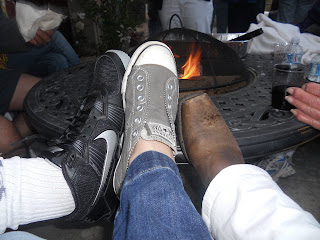 We crowded around the open fire and everyone agreed we had CA life covered with our footwear: trainers, sneaks and my Frye cowboy boots (right).  We laughed some more about nothing.  Does that make us Californians too? Or just feeling groovy?
Posted by About Last Weekend at 1:11 PM