One of the summer camps my kids do is carpentry. It kills me. 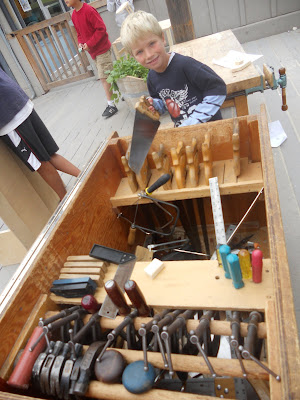 The sight of Cy, six, hammering, turning in screws and sawing off a piece of wood for his new double seat is hilarious. Because he's so little, it takes him just about all day to saw off one piece of wood, but he's undeterred, nose to nose with the blades for hours.

They do carpentry out on an old deck covered with a sail at the  Junior Arts and Sciences on Lake Merrit in Oakland. Ages six to 12 are out sawing and hammering away from 9am to 4pm with Bill, the teacher's ACDC music blaring in the background. How he gets them to make skateboard ramps, garden chairs, abacuses and toy boats without even the smallest of injuries  - that I've heard of - is beyond me. 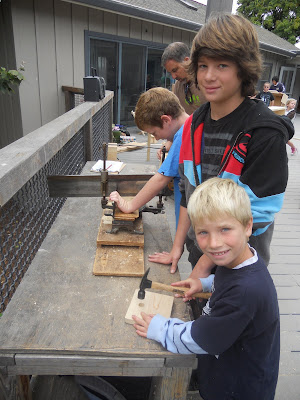 From time to time they'll take a break and play a round of Capture The Flag on a lawn carpeted with goose poop.  This is the cheapest camp the kids do all summer and the one they love the best. 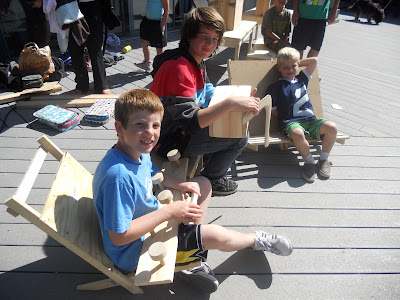 I am always incredibly envious of my kids doing camps every week, including jewelery making, cooking and sports taught by pros. But would I have embraced a different camp each week when I was a kid?

The new thing is to complain how kids don't pootle around the neighbourhood like we used to, riding bikes and making forts out of wood and old blankets. But it's actually we parents who have created this scenario. Many of us are terrified of our kids venturing beyond our immediate gaze and beyond the yard. All this roaming in the olden days was based on the fact that you weren't allowed inside during the day. And permitting other parents to curb your child. Many parents now don't take kindly to their child being even slightly castigated by others, however poor the behaviour.

I was always a voracious reader and spent many days lying on my bed eating unripe peaches from the neighbour's yard and reading entire library classifications of tales and legends and morbid novels by Somerset Maughan.

The other days I spent down at the public pool with my friends, clutching enough money to pay for two ice blocks (popsicles) a day. Swimming, sunbathing, hopping back in the pool and sunbathing some more filled many hours, along with comparing wet shapes on the concrete. And trying to avoid the pervy pool manager Tiny who came into hose down the girls' changing rooms just that little too often.

Tiny ran a tight ship though and there was nothing like the occasional current of terror that shock-waved the pool when Tiny yelled "OOOOOY - YOU!!!!". We were never too clear who the "YOU" was,  but we assumed it was some poor drongo who had trangressed the dive bomb rules.

I don't recall complaining of being bored, but it might be interesting to hear my mother's view on that.

So now I join the chorus of parents glorifying those good old days when there were no camps and we supposedly roamed unsupervised. I emailed my college friend Kathy in NZ, ready to reminisce about those halcyon days of our youthful summers.

"Wouldn't it be better if we just stopped enrolling our kids in all these camps?" I said "and let the kids roam around the neighbourhood in the summer like we used to?".
Kathy used to live in a remote tiny farming town: "You must be bloody kidding!" she said "We were bored poo-less. Oh my God, the only decent thing in our day was walking down to the corner diary (store) to get a Crunchie bar. And we looked forward to that all day!"

The day after carpentry camp finished, Tallulah, nine, and Cy spent hours setting up for a Gallery Show in the Living Room, showing both carpentry and art.  ID was requested on entry and a green apple and massage were complimentary. Cy insisted on being the "tour guy" - he said Tallulah couldn't do it because she's not a guy.

They following day was spent re-setting up outside and writing menus for the Gallery's restaurant. They laid out a lunch of cut-up apples and carrots followed by cheese and salami sandwiches. So maybe a little more time spent inside than when we were young, but are they such different souls? Except for the salami.
Posted by About Last Weekend at 11:11 PM