My Sister: cooler than me

Cy, six, always has a favourite song and at the moment it's "Cooler than me". 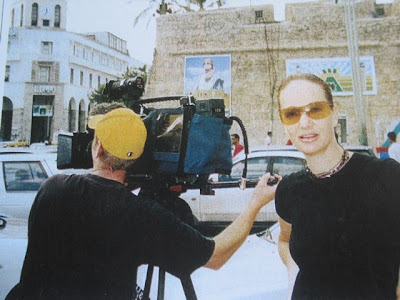 There is always someone in your life that is so much cooler than you. Swinging down the road with je ne sais quoi....managing a band. Or worse news for you, in a band.

For me, it's my youngest sister Pietra. She's a documentary maker who travels the world following other cool and interesting people around and recording their doings. Here she is above filming in Libya. And between making films and collecting awards from Sundance, she's sometimes stuck for money and work, living like a true artist, tracing the Way of St James on the Camino Santiago de Compostela pilgrimage tramping the arduous deserts of Spain for four weeks with just one change of clothing. Often no shelter. No shower, one meal a day. No people. Losing 24 lbs. Lucky bag.

Course she will argue that it's hard yakka, she is always totally knackered and she hasn't got it sorted at all.  She may suggest she's a stroppy madam (nooo...) particularly grumpy in the morning (never seen it!) is single and has cottage cheese cellulite on her knees (knees need not be bared!) So? When you had breakfast with Robert Redford (yes, yes I know there were 150 other directors there) weren't you wearing trousers? 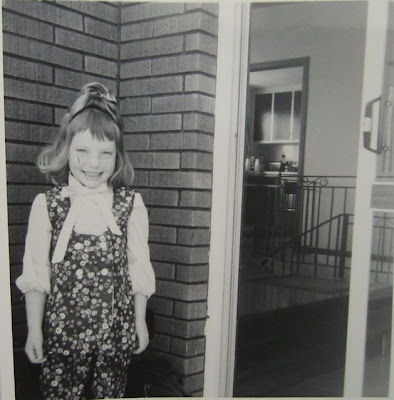 When I was home recently at Ohope Beach, NZ, I found the mornings to be a revelation.  Pietra is nearly 6ft of gyp-setting, wearing a pair of shiny skin-tight black pants, huge crochet sparkly poncho, orange lippy, huge purple Lucite ring, swoopy gold earrings and enormous swatches of red hair coiffed in what we call a "Mrs Dibble" bun (our old ballet teacher ) on the side of her head.  Has she just come from a nightclub in Eastern Russia or is she just going? No, it's neither. She's going for a walk along the beach. Pietra's the one who took a balldress when she backpacked around Europe at age 24 and actually wore it. Pic above shows her in "Mrs Dibble" bun even at age six. She is loyal to her hairdos.

One of the reasons I started writing this blog was chronicled in one of my earlier posts. I had lost Pietra's phone number and googling her revealed page upon page of entries. She even had a rating in the Hollywood who's hot list. Just a couple of days beforehand, a local shopkeeper googled me after I left a bottle of shampoo in the store. Apparently there was only one entry for me: I had bought something at the elementary school fundraiser. 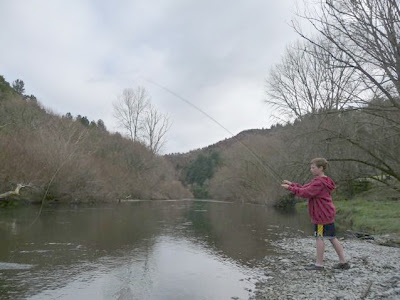 When Harley, 12, and Jackson, 11, were in NZ last week, Pietra and Dad took them out fly fishing on the Waimana River to try and catch some trout. Pic above of Jax.

Having done this in...yes Ponoi Russia... she tried her sideways number eight move  - and whoooosh - the  hook swept around and - boomeranged into her right cheek just a touch from her eye.  Yeeeooochymama! So in her face was a huge hook dangling a four inch rainbow feather. My Dad and her - staunch Kiwis - tried to wiggle and unhook it, then yank it out. Until they noticed Jackson feeling the utter pain and gruesomeness but wanting so very much to watch. So they decided best to head to the doctors.

Pietra swept into the doctor's surgery, with Dad and two boys in tow.
The nurse said: "Good afternoon! What can I do for you?"
Dad and the boys were dumb struck.
Pietra wasn't sure what the nurse meant - then she pointed at the huge fly fishhook hanging out of her face just below her eye.
"Oh" the nurse said,  "I just thought that was a decoration.... like piercing."
She summarily sent them off to A&E where the specialist nurse pulled out the car pliers, a wrench and a boatload of other contraptions. After a half hour of sawing, one side came off and she slipped the other side through.

Pietra now has a huge swollen side of face and may be left with imperceptible holes just below her eye. She had single-handedly made trout fishing into a extreme sport.

When my husband, Kevin heard this, he said: "Wow! You know -  that's a compliment! That nurse thought Pietra was so cool that it was normal for her to have a huge fly fishing hook in her face!".

I was green with envy. What would the nurse have said to me?

I told my friends who confirmed my worst fears.  There was no doubt that the nurse would have said: "God, woman! You have a huge fishhook in your face!"
Posted by About Last Weekend at 9:38 PM