A recent Yahoo article asks: what will we call the next generation of kids? We've had X and Y,  not sure what happened to Z.  One of my friend despairs it will be "Generation Subprime" - greedy, entitled and broke.

In a previous post, Carpentry Kids, we talked about whether it's better to allow kids to roam freely as we did when we were kids, or schedule them in camps. Many parents complain that their kids don't know how to entertain themselves anymore...without the aid of screens. The recent movie "Grown-Ups" chronicled a re-union of of childhood friends who meet in the woods. The most interesting scene was on arrival when the kids could not be parted from their screens and didn't know how to play outside.

Anyone who reads this blog is somewhat familiar with my cynicism, but after our week in LA  I am cautiously optimistic about this generation. 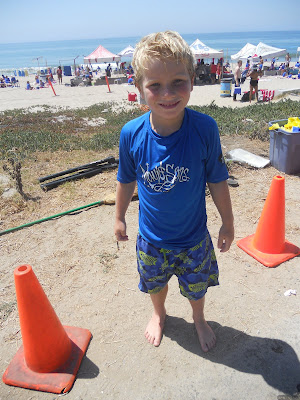 All five boys - my three and my friend Cameron's two  - had mornings on the beach at Will Rogers Park in the Palisades, LA. Cy, six, went by himself to 'Fitness By the Sea" with 100 activities to choose from (of course this is LA!) including Tai Chi and surfing. My eldest two, Harley, 12, and Jackson,11, joined their friends in surfing and beach volleyball  taught by two former champions, Sinjin Smith and Randy Stoklos. (of course former champions, this is LA!) 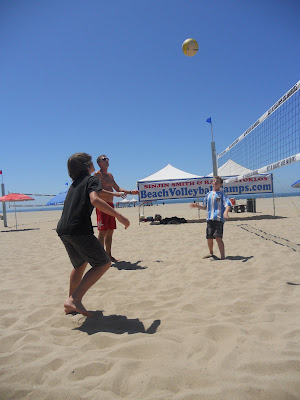 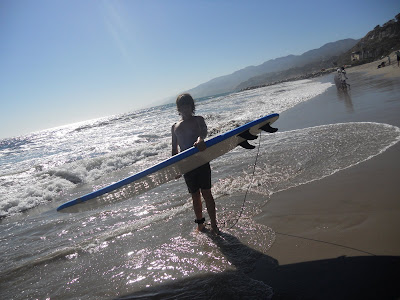 But the afternoons were the revelation. Getting back to Cameron's house in the Palisades, instead of heading straight for the TV or screens they played...Monopoly. Not just for a couple of hours. These five boys played at least five hours straight for five days straight. That is 35 hours of Monopoly.  There were intervals of bouncing their brains out on the trampoline, but for the most part they pretty much played Monopoly. Without fights, whining or anyone upending the board (which er, yes I might have done once during my childhood). I was doubly gobsmacked that they are playing a game since I have always disliked games, with the exception of ones like bocce ball  where you can play with a glass of wine in your hand. 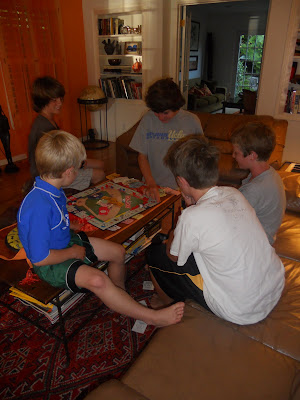 There was a brief spell of the Game of Life on the last day: "I'm a lesbian' said Cy matter of factly when it turned out he was a woman marrying a woman.

When we got home last week and the boys reunited with their sister Tallulah, nine, amazingly the good stuff continued. They played Monopoly for more days on end. 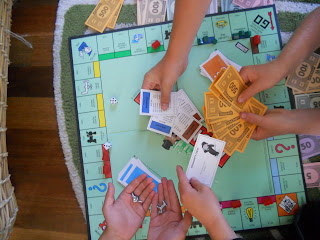 You will rarely find me so glowing and positive, so bask in the goodness...
Posted by About Last Weekend at 9:10 PM