My sister, Pietra - yes, she of the Cooler Than Me -  just posted a photo on Facebook wearing what her friend calls a "pom pom ponchette". The pic instantly got a million comments. 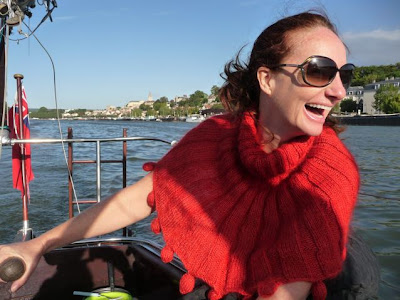 It's a fabulous little red knitted thing that Shakira herself would lust after. Pietra explains that in fact Mum made it. "I started it, doubled back on myself and it would be covering only one shoulder if I carried on" she says "so thankfully Mum unpicked it and started again". Well some things never change. Mum always did my "Home Economics" sewing projects, though I must say I shone when it came to cooking. My Invalids' Pudding was par none.

Anyway, Pietra appears to be driving some sort of yacht (Dad says he's never seen a tea cozy steering a boat before) and she writes: "Just sailed into Paris at sunset, past the Eiffel Tower and Notre Dame..with champagne of course" Apparently she's had a few days on the boat and appears to be with two boys (Boys! Telling Mum!).

Then she will head off to Amsterdam to join eight other hand-picked documentary makers from around the world for a workshop. Then to India to research a doco. 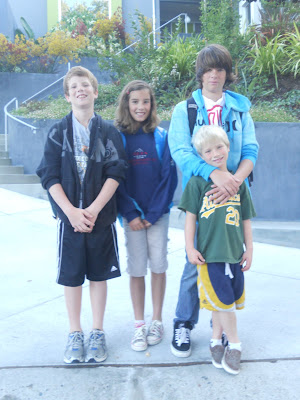 Well there's a lot going on here at our house in Oakland too. Quite a lot, in fact. Don't worry about me, no sireee! It was Back To School day today. Big Day. A heart wrenching milestone of not inconsiderable proportions. You see it was Harley's ninth - and final - year at our K-8 Oakland public school, a lovely little school where all four kids now go. Just before we headed off, I gathered the kids for a photo in front of our house. Then looking over, I realised the kids hadn't put out the recycling properly last night. There was paper and rubbish everywhere. Nothing had been consolidated. Nothing was tidy. I was utterly furious! So a good time for a rant and rave and wee bit of scream in front of neighbours who were heading off to work. Pic above shows kids in happier times, just minutes before "Garbagegate".

So not Paris, not sailing, but very very....not Paris and not sailing.
Posted by About Last Weekend at 10:18 AM