Every two weeks I write a column for the East Bay Express called Wineau, reviewing three wines under $10. This week we tasted three whites with beautiful labels. Are they as pretty on the inside?

Also press here for Kiwi Wineau, my video log of the actual tasting which this time took place in Santa Barbara. 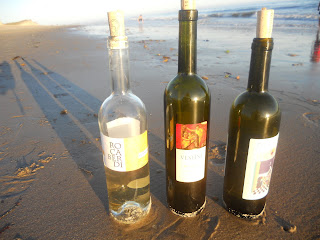 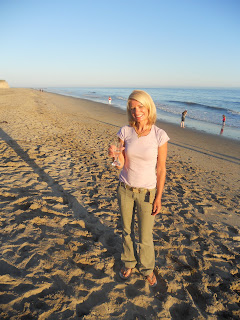 Pretty Label Wines
But are they beautiful on the inside?
By Jody Brettkelly
Many of us occasionally buy wines because they have a gorgeous label, but few of us admit to it. We were heading for a week's vacation in Santa Barbara, which is surely the supermodel of seaside towns. This may have something to do with the orange-tiled Spanish buildings, lush-green hills, and shiny, wide, pearly-white beaches. So it's only fitting that I would choose three wines based on their labels. At Paul Marcus Wines at Oakland's Market Hall, I found three whites that appeared outwardly glamorous and luxe in very different ways.
Ten of our vacationing friends in Santa Barbara gathered for the task. Our portentous challenge was to determine if these wines taste as good as they look, or if their charms are only skin deep. First on the catwalk was Rocaberdi from Catalonia in Spain ($7.99). The yellow leaves on the bottle looked very "fashion-forward," said Melinda. There were some mixed feelings about this wine. Sally and Barry are partial to the plus-size range of wines such as loud reds and kick-butt Chards, rather than the willowy thin ones. They found this almost tasteless. "Thank goodness Spain has a great soccer team, because this is not good," quipped Barry.
But five of the others liked it better. Everyone categorized it as grassy and a bit acidic, and found it calling for a pairing with something stronger like spicy tuna rolls to counteract the acidity. "No finish at all, though," Tom said.
The second was Vestini Pecorino Terre di Chieti from Italy ($7.99). The label features young, Spartacus-like males cavorting nearly naked, clearly dancing to the tune of the devil in the background. "It looks like an orgy," Sally observed. But her enjoyment was short-lived: "The label is deceptive because there is no flavor in there at all."
However, a few of the rest of us agreed with Anne's take: "It's much smoother than the first, and I can imagine sipping it around a pool and eating shrimp." Obviously the saucy, naughty label was making poets of all of us — Melinda and I agreed it could be sipped on its own by a pool in the Hamptons, though neither of us had ever been to the Hamptons.
The third was Consono Verdichio Dei Castelli di Jesi (2009), from Italy ($9.89 on sale). Its label features a Mondrian-like astrologer with a checkered, Dali-esque scene behind. So a range of artistic bases are covered, but does it have any interior complexity? No one liked the scent of it, very rotting tropical. Tom found it flat: "There's something off about it."
At last, the Santa Barbara sun set on our three beauties. How did they fare beyond their modeling careers? Anne said the first and third "need to go to rehab," but the second, the Vestini, is an "up and comer, quite lovely tasting." A beauty with a nice character? Now that's a keeper.
Posted by About Last Weekend at 8:03 PM