My title is a little deceptive as the Santa Monica stairs are not secret to the hundreds of hard bodies who run up and down them all day long. 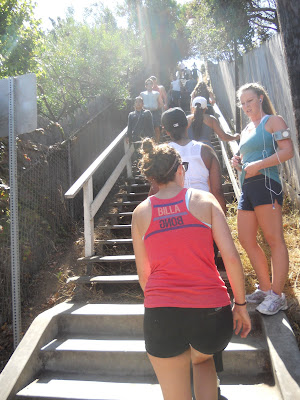 I am talking about the 170 wooden steps between Entrada and Adeleide in Santa Monica and another set a few paces down, the even steeper 189 concrete Fourth Street steps.
Today the busiest stairs are the wooden ones, which on Yelp have inspired untold vitriole and passion, from: "If Dante's Hell had a stairmaster this would be it!" to another who gets really upset at the "hater comments...stop whining - the stairs are free!" 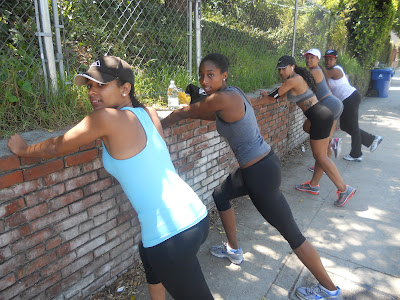 The first thing you notice is the scores of people on the sidewalks below and above the stairs stretching and warming up. Some are on yoga mats easing the pain of push-ups and downward facing dogs. Someone has soldered a high bar across two poles creating a pull up bar which is only for the very tallest and toughest. These young women above and below are part of a training session with Dino Mosley who used to work with Nicole Kidman "high maintenance" and Julia Roberts "very nice woman" and up and coming basketball and football stars. 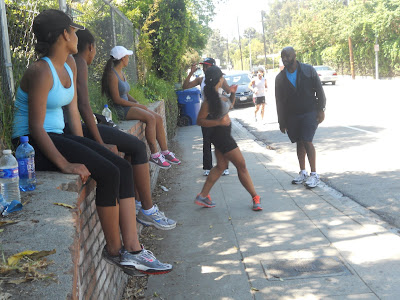 Women with the fully glossed tout pout pull up in Escalades and Range Rovers accompanied by buff personal trainers. They rub glutes with college basketball hopefuls, wanna-be actors and all sorts of bods from all over the world, all sorts of shapes and sizes. There are men who have their shirts off and men who should keep their shirts on. One says it's great for fitness mavens who are single and actively looking, another decries it as a horrible "meatmarket".


The up and down stations are often littered with Evian bottles and Starbucks cups and some enterprising person even put a vending machine - well hidden - on one. One day a German film crew turned up to hold a reality fitness show, forcing the  to run up and down all day. 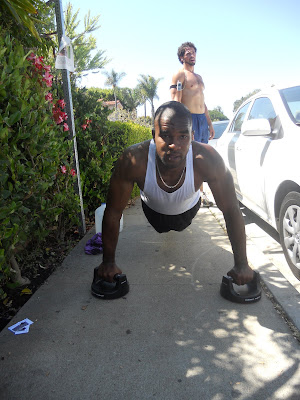 Everyone has to warm up on the sidewalk. According to the Secret Stairs guidebook, you will never see anyone stretching or exercising on the 4th street median: local homeowners became so irritated by the incessant stair-climbers driving up day and night, using their street as an exercise studio that they've called the police to issue tickets to anyone doing push-ups and sit-ups on the grass.

I'm thinking most of the stair runners love being outside, but not sure any of them notice the ocean and canyon views and the facing Rustic Canyon hillside homes. Walking up and down four times, I see why, it's so crowded and so steep you have to keep your head down. And they may not notice the architecture. According to "Secret Stairs"  one notable home belonged to British novelist Christopher Isherwood, who in 1952 called the Canyon our "western Greenwich Village'. And another house was designed by the architects responsible for the Chinese and Egyptian Theatres in Hollywood.

So up we go again... (and my whole body ached the next day after only four sets and many people do an hour's worth). It's not organised in an way but the unwritten rules are obvious: don't pass unless you're going faster. Some people are now complaining about those who take stairs two at a time or who go backwards. Or runners swinging medicine balls (!) all over the show or people who kick one leg out at each step. The newest complaint is the number of people who bring their dogs and there is concern about the stress to the dogs' hips and back. 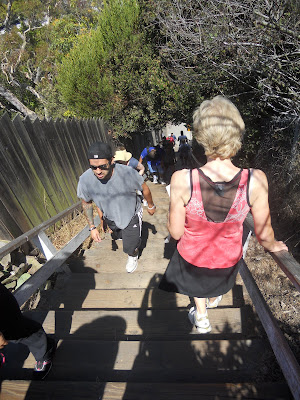 Another stair runner pleads : "Ease up on the Gieorgio!" The most hilarious recent complaint on Yelp ( and I think I spotted the chap in question) is about Old Man Tea Bag, an odd hippy guy who insists on wearing the shortest of shorts and stretching out his legs and other bits at the top of the stairs.

These stairs are apparently the favourite of  the LA firemen. One runner says: "If you ever have a fire, just come to these steps are yell "Fire!". Alongside them on the weekends are acrobatic hippies, some of whom apparently try to scale the steps in a handstand position.

Noone really knows when stair running became popular here, but apparently last Thanksgiving Day at 7am it was packed.  Some drive from 45 mins away to work out just here.

Brian M sums up the oddness of this phenome: "Um, they're stairs... really tall steep ones. Not sure what the cult fetish is with these stairs. It's LA and that pretty much explains it all."

Posted by About Last Weekend at 9:48 PM