Pacific Palisades: where the mountains meet the sea... and stars

This week I am with my three boys, Harley, 12, Jackson, 11, and Cy, 6, in the Pacific Palisades.  It's a tiny town between Malibu and Santa Monica.  This is where the laid-back A-listers live, like Tom Hanks and Jennifer Garner. They are a casual beachy lot here, even parking their vintage Bentleys and Rolls Royces on the street. 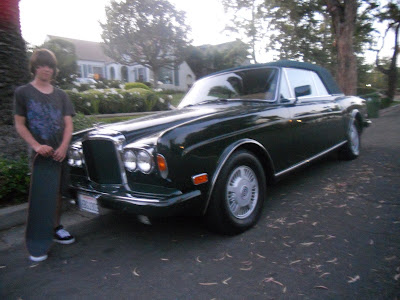 I am staying next to lovely Cameron, my Oakland friend, who moved down here three years ago. I wrote about her in "Bit of a Doodle Do" - she is the one who owns Blue and has Labradoodle playdates.

I am hoping for some star sightings. The tabloids and celeb mags have led me to believe that the place would be chockafull of celebs. "Oh it's you! Oh you again!". A huge percentage of the paparazzi photos you see in mags are shot on the beach here, at the Starbucks or in the park. Around the shops and cliff front some of the houses are smaller with compact yards, but even the most modest home here will set you back $2m. Jamie Lee Curtis is just around the corner from where we are staying, Sissy Spacek is apparently always out walking her dog, Tom Hanks is always spotted, here -  sitting on school bleachers - and there - knocking on bookstore doors.


Further up the hill on bigger gated spreads on Amalfi Drive are Spielberg, Oprah and Sugar Ray Leonard. In the park (seemingly constantly) is Jennifer Garner, who is often seen at the small Farmers' Market on Sunday and just generally out for coffee with her husband, Ben Affleck and her two girls, Violet and Seraphina. Suzanne Somers was spotted at a beach cafe the other day but I am after bigger fish, no offence to Somers, apparently she looked great for 60. 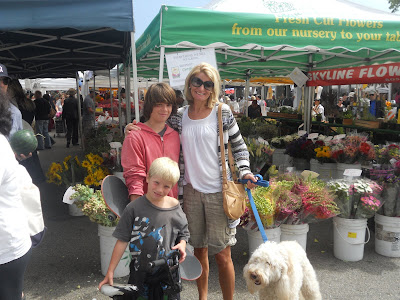 So we head down to the Farmer's Market, not to be stalker-ish or anything. We had to get some organic $2 organic nectarines anyway, to go with the $30 rotisserie chicken from Gelsons (I thought the sign said $3 and I bought two ). But there was no Jennifer Garner. I hung around the cut flowers stand for an indecent amount of time but no luck. You can do this kind of odd lurking when you're got kids on bikes and razors and walking Blue the labradoodle.


Dropping the kids off at beach camp this morning, I kept a close eye out, but the truth is everyone looks like kind of famous here. The friendly guy who checks in Cy, six, at  "Fitness by The Sea" camp looks just like Colin Farrell.  A couple of the blonde mothers dropping off look familiar in a full-lipped and tight-eyed way. Maybe the ubiquitous expensive dark glasses and long scruffled hair for both women and men makes everyone seem terribly importante. 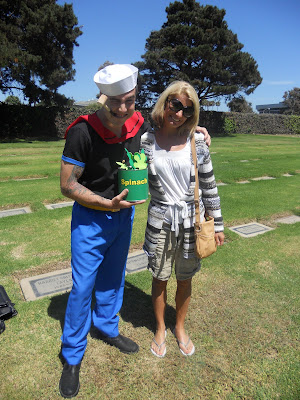 On a special tour called  "Adventures in Santa Monica" held by the Santa Monica Conservancy, one of the featured attractions was Popeye's creator who was buried at the Woodlawn Cemetery. We pulled up inside the cemetery and one of the docents said "The Popeye guy is very lonely up there, he would love you to go up." Standing by the grave was an actor, who fair dues, stayed totally in character as Popeye, the spinach eating sailor man. I was never that much of fan of Popeye but someone was, because the show was popular for five years and resulted in a 33% increase in U.S. spinach consumption.


More exciting for me was the fact that Granny Clampett  from "Beverly Hillbillies" was resting in the mausoleum nearby.  That dang little old lady was always whacking the heck out of Jethro for being a numbskull and fending blokes off poor stunning Ellie May. 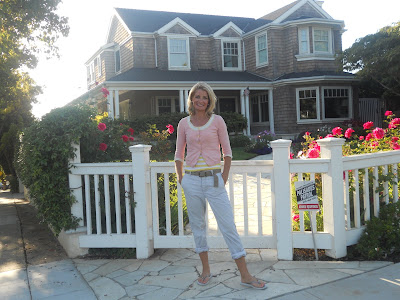 Before that we had just briefly missed "the Bill Cosby women" as we arrived at another tour. Resigned to a no show on the celebs this week, I contented myself with a photo in front of this house, which is down the road from where we are staying. Much sought after for its all-American charm, it has been featured in numerous catalogues and adverts, so many in fact that one neighbour wrote to the local newspaper to complain. So in the end I have my A-lister - albeit retired - of location houses.
Posted by About Last Weekend at 2:02 PM