This week we are staying with a friend in the Pacific Palisades in LA, which is reputedly home to many of the genuine A-listers. But two days have gone by without a celebrity sighting. Not even a brush with fame. 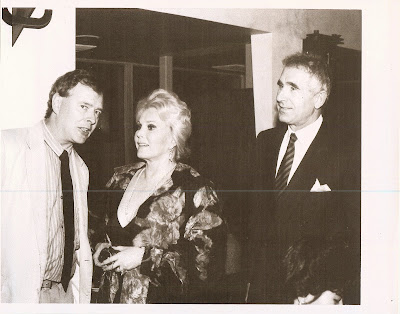 But that all (sort of) changed yesterday. During a tour of Santa Monica Civic Auditorium, I brushed with someone who creates fame. We were doing a backstage tour of the auditorium, where the Oscars were held during the Sixties. The host of many of these Oscars was Bob Hope and our docent was introduced as Bob Hope's publicist. "Oh yeah, " I thought cynically, "If he's that big, why is he leading us around the wings of the stage and showing us the backstage toilets?"

It turns out that our docent really is one of  better known publicists of all time, and has in the past worked with pretty much everyone, including Michael Jackson, Jane Fonda and Arnold. A glance at his website reveals these days he is shorter on the mega-star names. But he is no slacker and along with producing three TV shows including "Who wants to be a Princess?" he writes on  travel and wine and works for a variety of charities and businesses including, interestingly, the National Watermelon Promotion Board.

John is so unassuming it beggars belief that he has worked for so long in such a ego-driven world. With wispy red hair, very ordinary clothing and a quiet mid-western manner he is very un-LA. And I guess that's the point: his clients are the stars, not him.

John Blanchette tells us about his weekend's work. One of his clients Zsa Zsa Gabor, 93, asked him to fetch a priest for last rites. John also found the time to write a press release about her request which was consequently highly publicised. Pic above of him in less stressful times with Zsa Zsa and her ninth husband, Frederic Von Anhalt

According to John, Zsa Zsa is very proud of her Jewish heritage, but we're guessing she is covering all bases with the priest. John has been her publicist for 23 years '"longer than eight and a half husbands". She is a "pain in the a**" he ventures quite fondly. 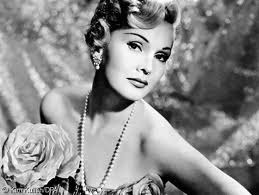 He has collected stories galore from Zsa Zsa over the years. One does wander how much of them are completely true, but maybe it hardly matters. Her mother bought up her daughters to succeed financially. As a schoolgirl, Zsa Zsa was told by her teacher that money should not be your life goal. "You're changing schools" was her mothers' reply.

At 16, Zsa Zsa lied about her age and married someone who could gain her entry to the US. Then she reported her new husband as a Nazi supporter and lost her virginity to his prosecutor.

Clearly John Blanchette has done a brilliant job publicising Zsa Zsa. There are fewer women more iconic that Zsa Zsa - but for what reason? Yet even at at the age of 93 she still makes front page. Over the weekend, the photo of her being wheeled into the ambulance, looking every inch her age and being tended to by a distraught husband, was heavily featured in many tabloids and newspapers. OK magazine said this week she was the top of the Yahoo "trending topics" whatever that means.

We are still hard-pressed to remember what she is famous for. For sure she is known for her nine marriages, flamboyant lifestyle, legal troubles and propensity for calling everyone "darling" in that very distinctive accent. People who have sat next to her in restaurants says she still whips up a frenzy of waiters, managers and fellow diners.

Finally I remember what she was in. Green Acres. No that was her sister Ava, says John Blanchette.

Apparently one of her big movies was John Huston's Moulin Rouge. On Zsa Zsa's instructions John Blanchette called Nicole Kidman yesterday morning to see if she wants the movie rights to Zsa Zsa's life, as they both played that same role. Before that, he called Drew Barrymore to see if she had wanted the rights. Wow, he had a busy morning. Apparently Zsa Zsa took Drew under her wing at a tennis match, when Drew was just a child and wandering around by herself. So she feels a connection there as well.

John once asked Zsa Zsa why she calls everyone"darling". "I can't be expected to remember everyone's name' she answered "and it would be rude to say 'hey you'." "Besides..." she added "All my friends go to the same plastic surgeon and they all look the same!" 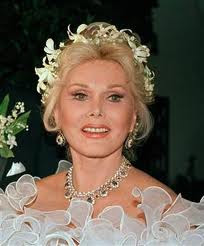 I've always wanted to write this line: What a Dame!
Posted by About Last Weekend at 5:28 PM