Shoes on the streets of Santa Barbara

There is no doubt that Santa Barbara is the supermodel of seaside towns. Something to do with the glossy green hills, orange-tile, rusted bells and white curves of the Spanish architecture. And beaches as big as football fields, clusters of yachts and tug boats and long piers of candy shops. But what sort of style will we see on the streets?
I did a bit of a cheat and headed straight for thrummingest of all the clothing stores on State Street, Wendy Foster Pierre LaFond.  The women below, who work in the store, are both wearing scarves and diaphanous long layers -  "We're off to lunch with our scarves!" they laughed - but one has simple white flip-flops and another little grey Edwardian-like booties. 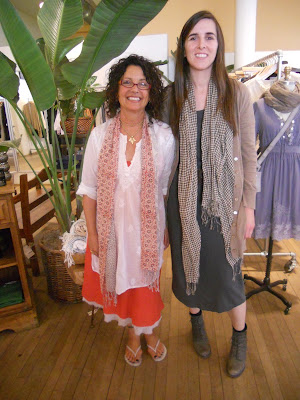 Not to be too pathetically breathless about this place, but the entire store has a beachy spa atmosphere of driftwood chandeliers, banana leaf plants and oil paintings of elephants. It has the usual boho chic suspects: Joie, Linea Pelle belts, Chan Luu scarves. But the styling of complete outfits makes us feel we too can have a piece of the JenniferAniston-KateHudson just off the beach, bath, bed and beyond perfection.(does it ever stop with those two?). The other assistant below wears biker boots with white and somehow makes it look summery. 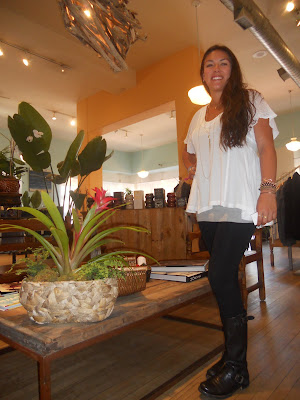 High-waisted shorts are totally easy to pull off...if you have 19 inch waist and ripple free thighs. To be honest that is just the start of the requisites. Needless to say, if you ever see me in them, gently straight jacket me: I have lost the plot entirely. But this young woman in Blue Bee (the second best clothing store in SB) makes them look elegant. Her boots are from Milan, her shorts and top from London, so how does she look so Californian? 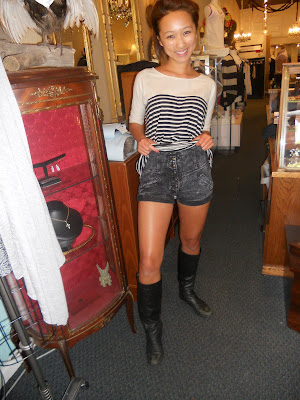 This art student below balanced her high-waisted shorts with boyish boots and a fresh buttoned-down fifties shirt and glasses. So I guess we can learn from these two entirely successful short shorters: little denim nmbers have to balanced with a more demure or fuller shirt. 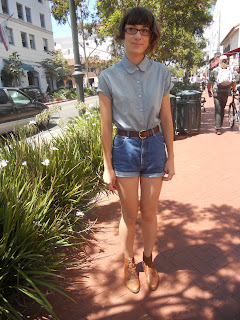 Vans (below) with cut-off shorts and a white tank are as classic and easy as California living used to be ...before everyone got into real estate..or didn't, but talks about it endlessly anyway. 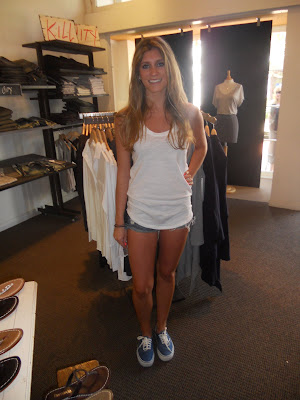 This was the most effortless look of the day (below) and she was wearing moccasins which usually look too Lost Boy in a Daniel Boone episode. Ripped jeans and a shirred top are often a total disaster piled on a total disaster with the strapless top causing endless tugging and adjusting and crises barely averted. But she makes the combo look fresh and wearable. (It's not, it just her). 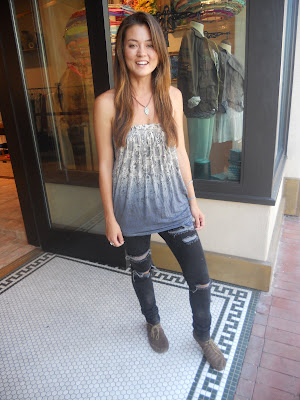 I  found this mother daughter couple holding hands and giving each other pecks on the cheek. Their devotion was genuinely touching, the daughter was visiting from Texas and  both wore classic English countrywoman with an urban twist. Mother had yellow leather flats and daughter wore black high Mary Janes. They asked about our vacation and I told them it was great because the kids were being taken care of. Daughter and mother agreed a little gentle apartness was a good thing and daughter said she takes a morning stroll to the beach, daily. One of my American friends advises to always limit visits to parents to four days."The fifth day" my friend says "they start treating you like a child and the sixth day you start acting like one." 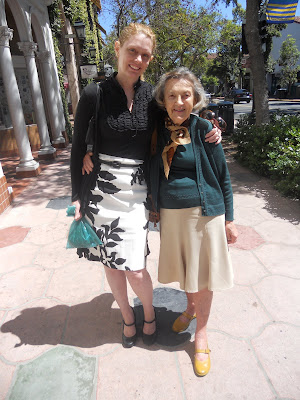 On the wharf, another mother daughter team with a more casual very pink style with flip flops. 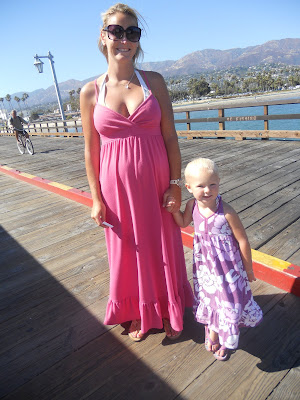 This red skirted girl mixed it up with a large African necklace and delicate black Audrey Hepburn flats. 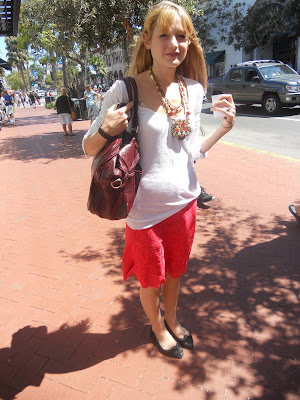 Mixing it up in a different way were this couple. I told them they looked just as ready for a jungle trek as for shopping on State St. They laughed uproariously and happily posed for photos and tucked my card away in one of their many, many compartments. 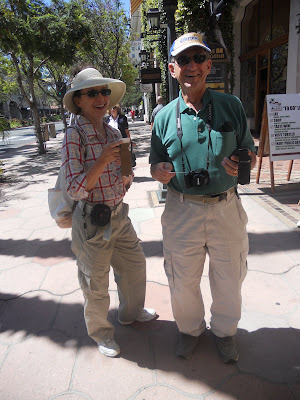 Down at the beach many were, of course, shoeless. This guy has built an elaborate new sandcastle nearly every day for 25 years. He lives in a nearby boat and says most nights his sandcastle is bashed down and he starts again the next day from scratch. 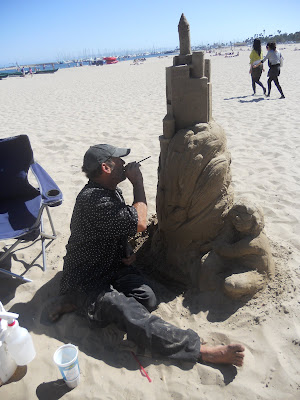 Just a few steps across the sand are these two roller girls from Italy. 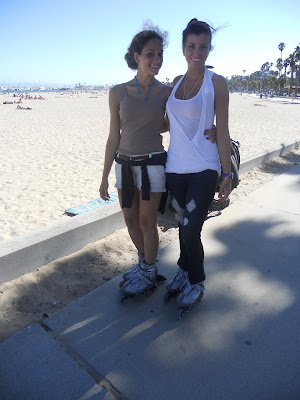 At the end of the day I find this bundle of bridesmaids-to-be, waiting for the rehearsal dinner. All school friends, their shoes run the gamut of flat sandals to patent pumps. What have we learned from today? I'm still not certain I can define Santa Barbara style but I am certain that I will continue to leave ripped jeans, high waisted shorts and strapless tops to those who can inexplicably wear them with dignity. 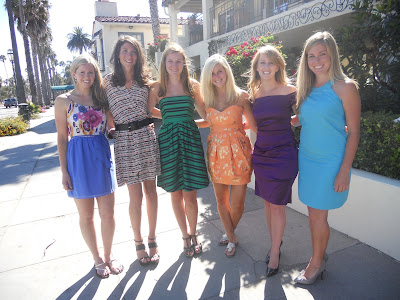 Posted by About Last Weekend at 10:50 PM