Golf: drive for show and putt for dough

The one sport I felt I should master on this Santa Barbara vacation is golf. It's a Santa Barbarey type of sport, outdoors and elite, and it just seemed appropriate. In New York, we got a handle on art, and Franglais chronicled in former posts, but we must not rest on our laurels. So golf it is. 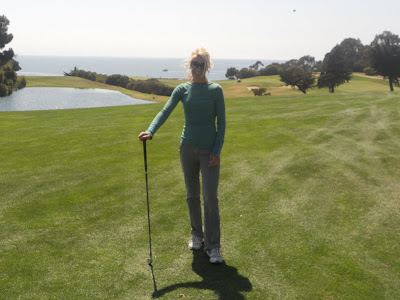 I signed up for a group lesson at the Sandpiper, just 10 mins along the coast from the Family Vacation Centre (FVC) at the Univerity of California, Santa Barbara. The Sandpiper is reputedly one of the most beautiful courses in the world.

An hour and a half golf lesson through the FVC costs $35, which seemed to be a bargain as far as golf is concerned. I had one lesson last year, besides which I have never touched a golf club in my life. So I am obviously golf's best judge as I am completely impartial.

If you are expecting a superficial Tiger Woods-like stripper club guide to golf, you will be sorely disappointed. This guide concentrates only on the technical and I make no apologies for some of the rather specialised terms and descriptions.

Firstly the course is very beautiful, it's on a cliff with lots of blue seas beyond. Again being wholly impartial, I would still say it takes second place to Ohope Beach Golf Course in New Zealand. And I'm not saying that just because my father used to be Club President and my mother does flowers for weddings there.

I immediately regret not having dressed with more care at least adding in something with a peppy yellow. I'm wearing my grungy khakis and an old ski vest, so today am more John Daly than Catherine Zeta Jones on the course. There is something so sorted about golf clothes and though I usually don't wear pink and white this is a good place for it. I spot a swathe of women from LA, who have pink golf bags in the shape of dogs and sparkles and lace on their sun-peaks and it makes my day. I was looking forward to putting on some of those natty two-toned shoes with spikes, but our pro, Tim, said my sneakers were fine. Drat. 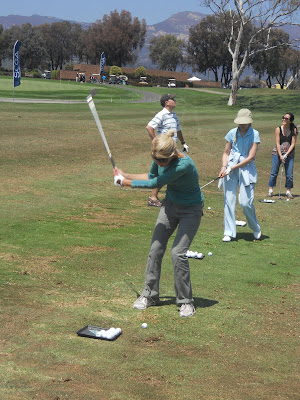 Our pro - doesn't that have a great ring to it? - Tim, has to be the best teacher I've ever had. I'm pretty sure I had him last time too. Knowing the rule of "drive for show, putt for dough" I don't really get too discouraged when I drive really badly, with balls skidding right and left and some not leaving the grass at all. I know putting is where I'll shine. Though Tim has some good tips on this driving. Just get this: bend your knees enough to hide your shoelaces. Secondly hold the club as if you're holding a bird, not so tight that it dies but tight enough so it doesn't fly away. This can be tricky and you'll find your bird sometimes dead, then ressurrected, then flying away. Next keep you arms in a triangle and pass the medicine ball back. Hang on, but what about the bird? Did the medicine ball kill the bird or was it released to nibble on organic seeds in a Design Within Reach bird feeder on a $40m hilltop home. Goodbye lucky bird. Anyway the point is: just follow the above. Now you can stop shelling out for lessons and spend the money saved on snappier shoes.

I have pulled the wool over your eyes if you think I have never putted. My youth was sprinkled with put-put courses so I have some understanding. But Tim also introduced us to chipping and pitching, which apparently some of the pros feel is necessary too. I beg to differ, it's just too difficult. 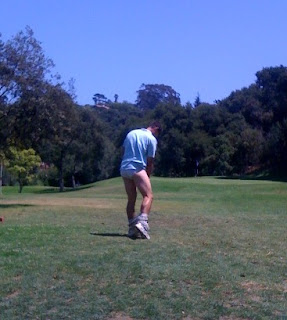 Just along the beach, at a public nine hole course, the rest of my family and friends are playing rather less seriously than me. They are closely observing a rule that is vital to your golfing success, as it is internationally recognised. If you hit the ball from the men's tee and it doesn't go past the women's tee, you must play your next shot with your shorts at your ankles. So needless to say, wearing decent underwear that can stand a public viewing, is a must. Pic below shows one player who was caught with his old tighty whiteys. Not a good look. The kids also wore their shorts on their heads which is useful for extra kudos, but not strictly required. 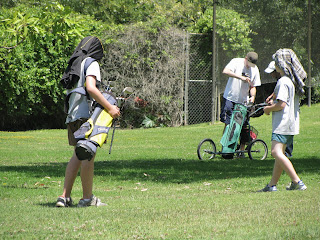 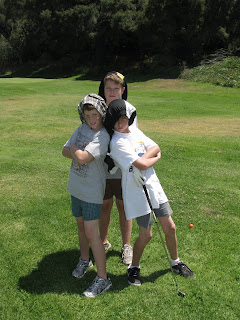