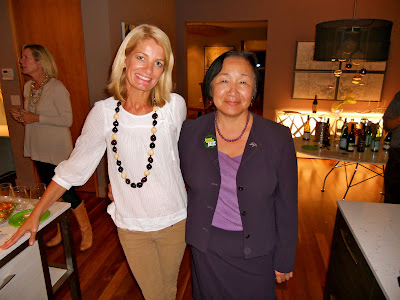 Oh she's not a Queen, she's running for Mayor of Oakland, I told her.

We're having a neighbourhood party at our house to meet Jean Quan, one of the four candidates for Mayor Of Oakland. It's part of her grassroots campaign to meet as many of the voters as she can, walking hundreds of streets and knocking on thousands of doors. She is also doing neighbourhood parties and ours is her 154th. 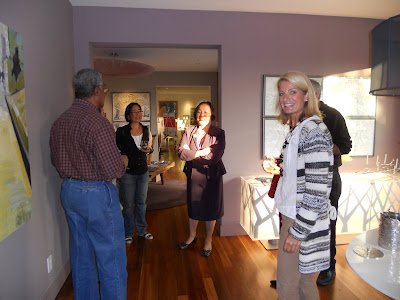 With Oakland in the hole because of falling property tax revenue and the high cost of funding police and fire pensions, you would wonder why the heck anyone would want to be Mayor.  But Jean does.  She calls it "The City of Dreams." 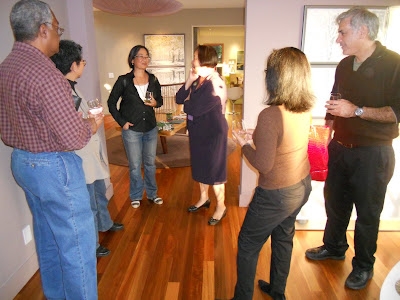 When we first arrived in Oakland eight years ago, London friends would ask: "Gosh, are you going to be okay there?" Yes, we are, with mostly stunning weather, 12 mins across the bridge from San Francisco, great parks, incredible restaurants and a top public K-8 school just down the road. But the City is nearly broke from funding the police and fireman's pension (police do not contribute anything to their pension, which allows them to retire at 50, sometimes on a large percent of their final salary). Break-ins are increasing in the hills, with people spotting the "white van" casing the streets, many roads potholed, some parks rubbish and needle ridden, some schools barely a safe place.  And for many families living in the The Flatlands,  their Oakland is a completely different City from the one we enjoy.

I'll be honest, usually politically I'm pretty lazy. At this party a friend and I confessed we were both terrified someone would ask us a searching political question, revealing the depth of our ignorance.  Ask me anything about shoes: what is the most weird shoe of the moment? But of course, the high duck boot. On politics, sometimes I'm a bit vague.

But I heard Jean speak at another neighbourhood party and she's clearly done the hard unglamorous slog over the past 20 years as School Board member and Councillor.  And now she is putting hours, days and weeks into actually meeting the voters.

Nights before the party she and her husband of 40 years, Floyd Huen knocked on every door in my area. I could see them out there every night for hours and I was glad to be at home inside cooking the dinner. They have walked 130 precincts so far - a third of the city - and Floyd tells us he has lost 20lbs.  The neighbourhood parties have been held at trendy restaurants, tattoo parlours (very good attendance apparently), Dojo studios and homes so poor they've just had their power turned off.

Her toughest house party has been at San Quentin Prison and not for the reasons you would think. She has been a staunch advocate of the literacy programme there. The men involved in the programme write the prison newsletter and had studied her policies and work at great length. The questions they asked were more demanding and detailed that any she had encountered before.

Floyd, in casual cords and sweater, turns up first with his helper and sets up the board. Jean arrives just after the first guest in a purple suit, purple beads and silver Oakland-ish pin. We have put out Mohua Sauvies and a local Syrah called The Tentacle with triple cream cheese, tropical fruit and chocolate thins. I have no idea how many will turn up, but in the end 30-odd come through the door, a pretty good showing. 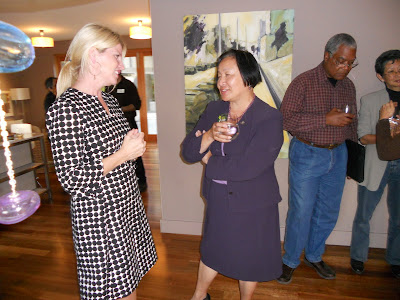 Turns out Jean really has gotten to know many of my neighbours on her walkabout and has somehow remembered their names.  She compliments one on his beautiful roses and they chit chat about his gardening skills. Jean finds out my friend Lesley (above) is a dress designer, manufacturing in East Oakland. Jean talks about her plans to exempt some small businesses from city taxes and to phase in business taxes. She is interested in coming to the factory to meet the women who sew Lesley's dresses.

In the kitchen, Floyd puts on a short documentary made by their daughter. A group in the Dimond District had been fighting for 20 years to close down Oakland's fourth worst crime spot, the Hillcrest Motel (bizarrely, the owner lived in tony Hillsborough), which was the scene of constant crime and later emerged as a site of child prostitution. One young girl was kidnapped off the street, raped many times, beaten and left for dead. With demonstrations and lobbying, Jean helped them to finally close down the motel, in turn instigating the Blight Ordinance, which helped clean up 465 other sites. With the motel gone, restaurants and legit businesses were attracted and it became a bustling, revitalised area. 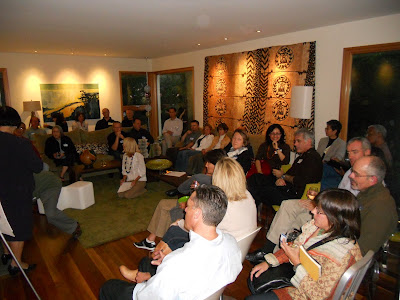 Her work spans getting Styrofoam containers banned in certain areas, Jobs For Jean (so far she's got 18 youth off the street and 15 in jobs), saving libraries and writing tough budgets for deficits she hasn't created.

We moved to the living room and Jean asked us what we loved and didn't love about Oakland. Loves included diversity, walkability, great restaurants and sports team "Keep the A's in Oakland!"
Don't Love included potholes, insufficient parking, roadside trash, poor schooling and break-ins. Despite assaults and armed robberies in Oakland declining by 40% over the last three years,  the hills homes have suffered lately from many more robberies. 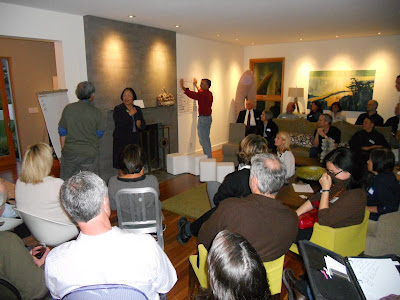 One neighbour talked a recent break in at 10am and complete lack of police response even though the homeowner could clearly see fingerprints on the counter. Jean had already looked into it and said the police should have responded as it was not a busy time of the day. We've been told that because of police cuts that police will not respond to similar crimes that have already happened.

Jean said she hoped the police would start contributing 9 percent to their pension and planned to offset the cost with taxes on phones and taxes on licensed marijuana suppliers in Oakland.

One friend, Gary, was not confident that contributing further money to Oakland would be used wisely, but Jean cited a number of different schemes which have been successful. 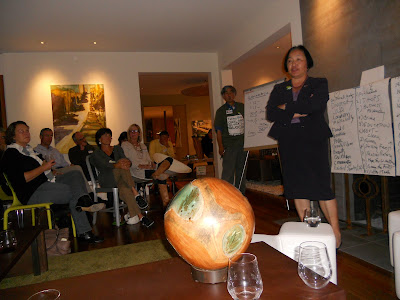 "I'm not perfect but I am hard working person and I don't need a driver to get around" she said.  "I care and I sweat the detail, that's the kind of public servant I am".  As Mayor she will cut her salary by 25% and put her schedule on the Internet.

After the talk and questions which lasted several hours, Jean mingled for quite some time.

One of my neighbours and a mother from school, award-winning journalist Jackie Frost was pleased to see Jean again. She first met Jean while covering the schools for the Oakland Tribune newspaper from 1988 through 1992. The next morning I asked Jackie her opinion and she emailed: "Jean came in as a reformer after the district went through a particularly bad spell of corruption, nepotism and general incompetence. She had lots of enthusiasm, energy and optimism which perked up the board chambers on Wednesday nights. I didn't envy her job." Jackie goes on to say: "Jean is a good soul and would make a fine mayor. Just worry that she doesn't have the chops for some of the city's ugly politics."

But I guess as a Councillor she has been dealing with the ugliness for some time. And I must say, remains unusually unembittered.

Jean fetched herself a plate of choccy thins and a glass of water and listened to each person about their particular bugbears; the parks, the incompetence of some council workers, the police pensions. Not sure what time she left, but afterwards the stragglers sipped Mohua until 1pm solving the woes of the world and Oakland.  And maybe we talked a bit about shoes too...

Next day my kids asked: "How will she get lots of votes just talking to a few people at a time?"

Just after that one couple emailed me: "We came thinking we would not like her. But left having gained more respect for her and her integrity. She will get our vote". Can't say better than that.
Posted by About Last Weekend at 9:41 AM