This week it was Back To School week, so a bit of a partaay whoohoo moment was in order. Not that I don't love my kids, but 10 weeks of quality time together begged for some quality time apart. The best under $10 wines for the job were Merlots, all chosen from the Berkeley Bowl.

Press here for the full article in the East Bay Express.

Press here for the video blog of the actual tasting, Kiwi Wineau. 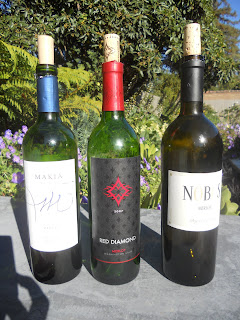 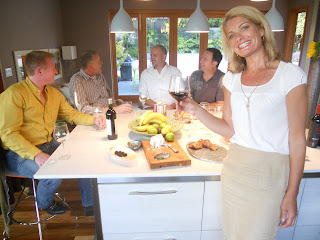 Merlots Go Back to School
These partay reds earn a B+ average.
By Jody Brettkelly
With the kids going back to school this week, some parents may feel the need for a woohoo! party moment. Don't get me wrong; I love my kids as much as the next person. But after ten weeks together, let's celebrate some quality time ... apart.
I thought the best big reds to review at our woohoo! gathering would be Merlots (all purchased at Berkeley Bowl). That would be appropriate, as we've just returned from Santa Barbara, where Merlots first got their bad rap. In the movie Sideways, droopy Miles declares, "I am NOT drinking any f****** Merlot!" The ironic truth behind this is a best-kept secret: The special wine that Miles drinks at the end of the film is Chateau Cheval Blanc (1961), a blend of Merlot and Cabernet Franc. And because of this movie, Merlots are often undervalued. But their softness makes them an easy alternative to the more tannic Bordeaux varieties.
It was the usual Friday-night suspects of Kenny and Mike and David and Martin, plus some parents from the school. The first wine we tried was Makia Estate 2009, from Mendoza, Argentina ($9.95). It had light tannins, with a bit of oak and cherry. It was one of the staff picks at Berkeley Bowl, but Kenny found it to have a chalky aftertaste. More of a solid B. We decided we were being too studiously serious, and ventured to the backyard, where the kids were playing soccer.
Fully exposed to the late-afternoon sun, we poured the second wine, the Red Diamond 2007 from Washington ($8.99). It is a dark and wintry looking wine, very nearly black, and incredibly fruity and juicy with all the usual plums and blackberries associated with Merlots.
One of us tasted a little bit of mint, which is often found in Merlots. I don't know if it was being around the kids nonstop for so long, but I could fathom just a touch of caramel. Everyone decided this was much richer by far, leaving a longer taste in the mouth. Kenny ventured that it actually tasted a bit Pinot-ish, and David said it was "berrydelicious."
The third wine was Nobos 2005 from Dry Creek Valley, Sonoma ($9.95). It's usually $30 to $35, so this was a veritable bargain. The back of the label reads, "No BS — All value with no pretense," which I liked. Berkeley Bowl says we should taste black cherry — which we did — and a hint of tobacco. "Much heavier tannins and better with food," said Kenny. At least a B+ for the price.
Suddenly a wintry wind blew up the garden skirts, fluttering all the plants. We sipped some more and lapsed into guffaws about what the cold wind does and where. The next day, we would begin the back-to-school bustle of supplies, speeches, and meetings. Nice to have an oasis of kiddy silliness for the adults. Berrydelicious.

Posted by About Last Weekend at 9:00 PM