Cheat tricks of an idle hostess

A fellow blogger Kayce, whom I quoted in my last post, writes: "A wise woman knows when to cook a yummy meal and when to cheat".  I'm unfamiliar with the first concept but a master of the second and Friday night dinners at my house, see pics below, are always the blatant scene of a cheat. 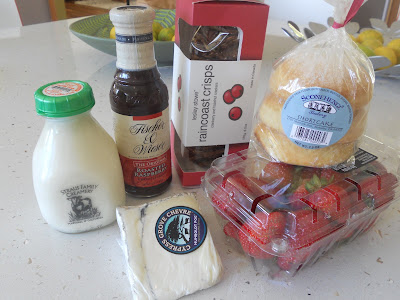 For me, it's all about the assemblage (is that a word?).  See pic above, of my usual Friday night pick-ups from the Village Market half an hour before dinner with the usual suspects, Kenny'nMike and David'nMartin and Lesley'nCurtis. My main aim when I invite people around is selfish. I want to have a good time and talk to my friends. I do not want to be faffing (real word) around the kitchen doing unsuitable stuff like cooking.  Call me lazy, but I'm...lazy. But the art is to make it look like you've gone to a lot of trouble. 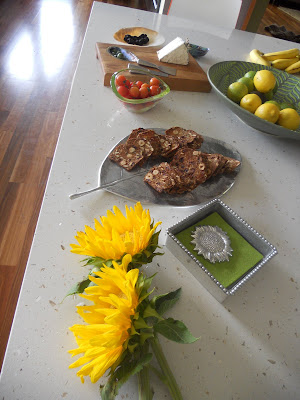 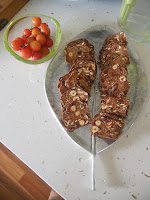 I don't worry how people descend on us on Friday night because more guests doesn't make it harder. I resolved many years ago not to be a martyr: guests always offer to bring something and I always accept the offer. I always ask them to bring a side. This is because sides are tricky. Often, shockingly, there are recipes involved.

Don't ask people to bring a green salad as it's too easy. You can do it yourself. Also you will get people turning up with bags of leaves and asking if you have oil and vinegar and salt and pepper and maybe some seasoning and maybe even a bowl and even some salad servers...

Kevin and the kids get the leaves from the garden and tomatoes from the bush that has taken OVER our whole backyard, hereafter referred to as The Thing. I also plop pomegranate seeds from Trader Joes over the top. Plus I have a wooden bowl from my fab friend Carson and it's too beautiful not to use. Kevin below uses the runaway parsley, tomatoes and lemons to make tabouli. 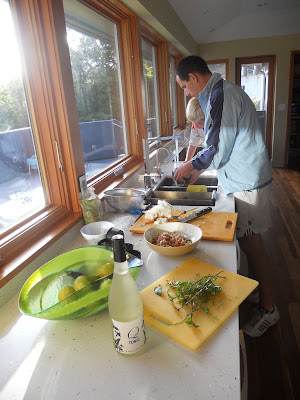 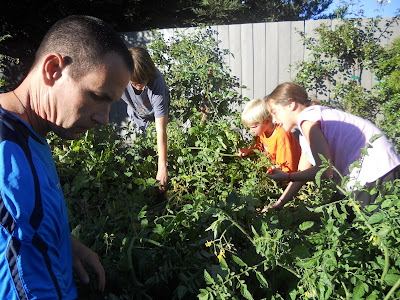 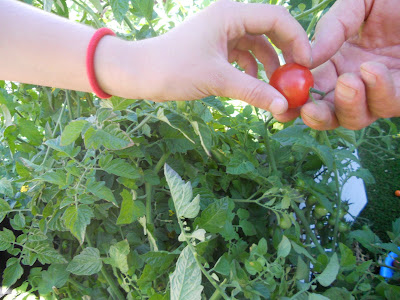 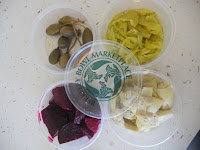 Which leads me to... put out all your bowls and fill them with trinkets from the fridge. Trinkets, right, being deli food you bought because it looked pretty in the store, but you forgot to use during the week.  Putting trinkets in the fridge is like putting things in baskets. Once in, they no longer exist.  This week, my fridge trinkets consist of Berkeley Bowl olives, fresh slices of beet, pickled peppers and and artichokes. 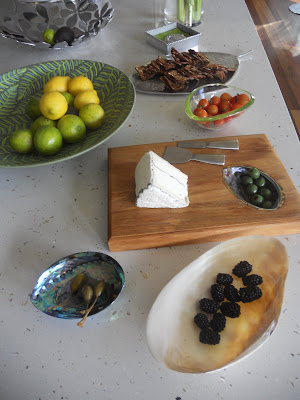 I have one drawer full of the bowls and I bring them all out: the green bowl from Nicole, the hand-made Masaki Asaoka ceramic plate from William, the silver leaf from Kenny'n'Mike, the wood and paua shell cheese board from Mum.  I buy only one cheese, usually a goats' cheese called Humbolt Fog. Nice to pour honey over it,  but not vital. I've learned from years of throwing out boatloads of cheese scrag ends that returning cheese to the fridge post dinner party is a fool's game. Or, at best, the mark of an optimist.  Kevin loves cheese but tries not to eat it because he's lactose intolerant. I don't need to eat it because I'm 48 and let's not get into that. And the only crackers I buy now are Lesley Stowe raincoast crisps in cranberry and hazelnut. 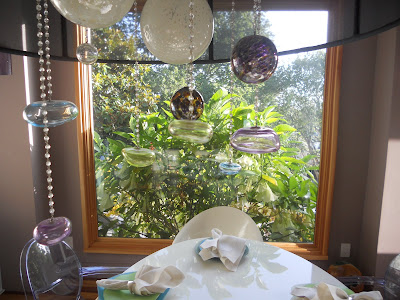 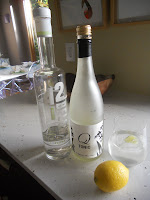 Drinks should have been mentioned first. Like the bowl thing, have the glasses all out, they looked so pretty lined up, an undervalued decoration.  As are cloth napkins, pic above. Beautiful glassware is nice but I stick to Ikea. Then no stress with breakage and you can easily put in dishwasher. Have one cocktail ready.  Kevin is great on the margaritas but GandT's are quicker. Splash out on some good tonic -  this Friday night it's Q Tonic, which looks more oh la la and does taste better. Or bubbles and you don't have to fork out for proper French champers. Our latest option is the Kiwi Quartz Reef.  Pic below of me in second hand Burberry. For white I just stick to good old Kim Crawford Sauvignon Blanc, and whatever reds are good at the Wine Mine. 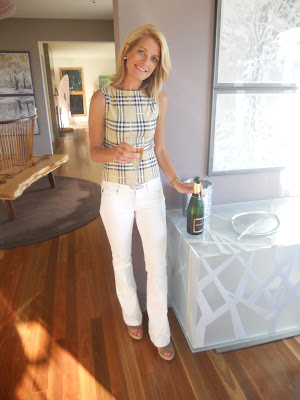 The second thing is meat. The most successful for summer has been BBQ-ed chicken soaked in  Trader Joe's Soyaki marinade.  For winter, pork tenderloin marinated in FisherandWeiser raspberry chipotle sauce. Leave in while cooking for a piquant non-greasy sauce. 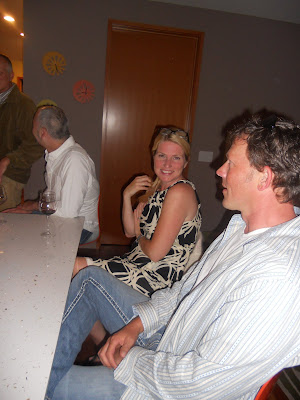 In winter I do root veges roasted for two hours with a generous dollop of oil, loads of  lemon juice and whole un-shelled garlic cloves. My favourites are butternut squash, sweet potatoes, parsnips, carrots, already cubed by Trader Joe's and slices of pear. Everything comes out caramelised and very yummy.

I copy some of Mike's triumphs - I hope for all your sakes you have a Mike in your life. But I totally dumb it down. One of my wintry green favourites is kale with red wine vinegar garlic, oil, chill flakes and chicken stock.  In the summer, it's cubed watermelon, tomatoes, avocado, balsamic, cucumbers and mixed fresh herbs. 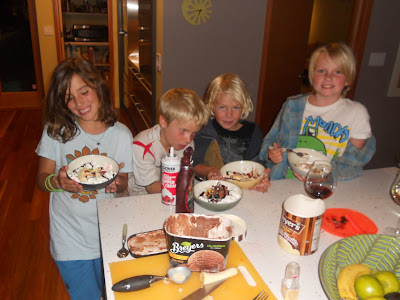 Yes, I agree children should eat the same food as adults but after years of scraping Friday night kid's leftovers into the garbage, now I just order Cybelles pizza and Harley, 12, oversees the Make-Your-Own Ice Cream Sundaes outside ..er..mostly.

For adults I stew up some dark berries and slap oatmeal, butter and flour over the top for a crumble. Whatever the measurements it always seem to work. Or bake whole pears, peeled but still with their with their stalks on, in red wine, loads of brown sugar and a shake of cinnamon. For this Friday I just bought scones,  plopped strawberries over the top with provide pouring or whipped cream. I also love good dates, but few other do. This week my husband said after our dinner, "I knew we were made for each other when we were the only ones at the table who had the pouring cream and ate the dates". See how romantic people feel after my Friday night dinners?

Well I've never had a complaint about my slothful style of entertaining, not to my face anyway and that's where it counts. What cheap tricks and non-recipes do you have?
Posted by About Last Weekend at 7:58 PM