Every two weeks I write a column for the East Bay Express called Wineau, reviewing wines under $10. This week we tasted four little canned Australian wines in a picnic pack...the Barokes "Mix-Pak".

Press her for the You Tube video log (vlog) of the actual tasting which took place by a pool in Sacramento. 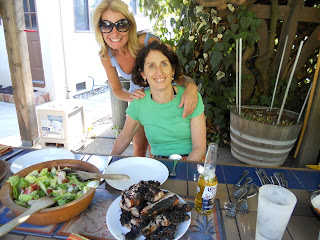 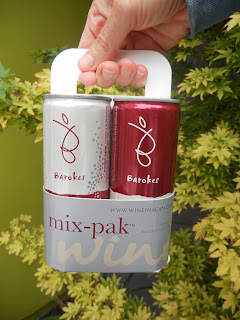 Cracking Little Cans
By Jody Brettkelly
Has the world turned upside down? It seems so when two Kiwi birds happily agree to drink wine from Australia. My friend Sue and I, who attended university together in New Zealand, were keen to taste these little Aussie numbers. But what was most interesting about the Barokes "Mix-Pak" is the presentation: four shiny cans in a cardboard picnic carrier.
It's marketed as an attractive convenience. Great for the outdoors, including boating, picnics, backpacking, and camping — and good around pools, where you worry about glass breakages. The single-serving idea is also handy if you live alone. You can chill them quickly and they are 100 percent recyclable.
The cans are also slim and cool, and the web site promotes impossibly chic places to do your sipping: in the mountains, at the beach, or seated on iconic mid-century chairs, under designer lamps. You are not just buying a can, but a whole lifestyle ... and possibly a hairstyle. The company says it spent ten years developing the patented technology to can wine safely without an aluminum or tinny taste, and that the wine is equivalent in quality to a $15 to $18 bottle. Apparently, you can't just walk up to a wine barrel and empty it into a can.
This picnic packet of four can be purchased for $9.99 from Broadway Wines and Spirits in Oakland or College Avenue Wines in Berkeley. The first can we tried was a Chardonnay, which looked "very buttery yellow," said Sue. Tom, her American husband, said it smelled "very alcohol-y." We agreed it was very light. "It's full initially, with a very short aftertaste," added Sue. Tom wasn't impressed, but I thought it was inoffensive enough to serve again.
The second was a Shiraz with a rich, red depth. The color and smell reminded me of picking blackberries off the side of the road when we were kids. Tom could taste cherries and we all agreed it was very smooth. "A smooth operator," said Sue. "This really is a dangerous little cheeky number, as it's so very drinkable," she added.
The Blanc de Noirs was a sparkling red and Sue felt it was "quite metallic. It tastes like the metal in the cans is coming through on the wine." But, she noticed, "It has a lot of oomph."
Now floating in Sue and Tom's pool at their home in Sacramento, we decided this was as good a place as any to try the Blanc de Blanc sparkling white. It divided us a bit. Sue said: "It's just the Chardonnay with the bubbles in it — it's odd." Tom and I preferred it with the bubbles. Sue could taste some honey in it, and we agreed it needed to be consumed with strong dishes like salmon and spicy gumbo.
Admittedly, this was a grudge match with two Kiwi birds tasting Aussie wine, but we were won over by the novelty of the cans. The wines themselves? Workaday rather than stellar.
Posted by About Last Weekend at 9:36 AM