This time of year with the chaos of costumes, candy and pumpkin-carving it's grand to see that kids can still dispense considered advice to each other. Cy (The Waiter) has been friends with John John (Star Wars Guy) since they were tiny, and at the grand old age of six they are still "great mates" as we Kiwis would say. Recently Star Wars Guy gave The Waiter possibly the best advice he will ever receive: "Decorate, don't carve!" (top pic by Monica Marcone) 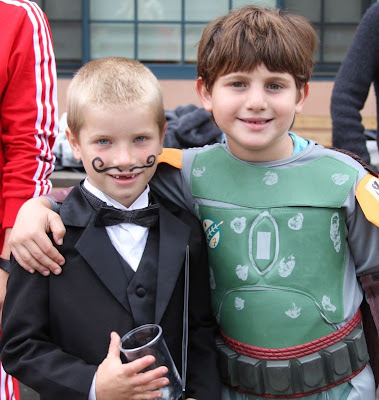 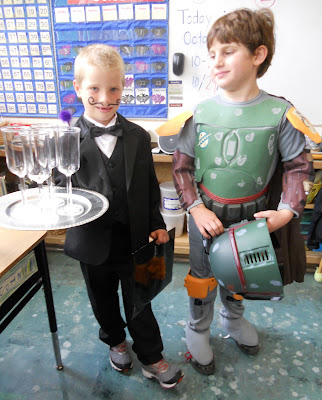 But they not only lend each other advice about how to navigate the holidays -  for The Waiter and Star Wars Guy are also harem scarem daredevil wild and crazy guys, involved in a life of adventure.

They'll start in the backyard, climbing a mountain.

"We're going up Everest!"
"Then we fight the bad guys!"
"Then we hide in the caves..."
"And climb over the mountain on a donkey..."
"And dive through the ocean on a whale!"

Then they notice bees in the garden and headed off toot sweet for the mudroom, pulling on socks and Ugg boots and baseball pants and hats.  They emerged many-layered.
"We're beekeepers" they announced.
"Don't get stung!" I told them. 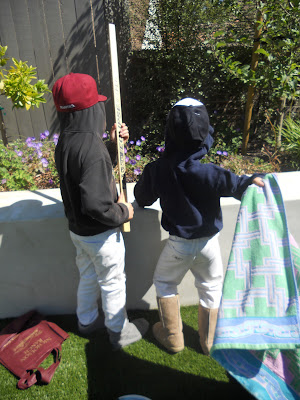 "Can't talk now" they called out "we've got beesness to do!" 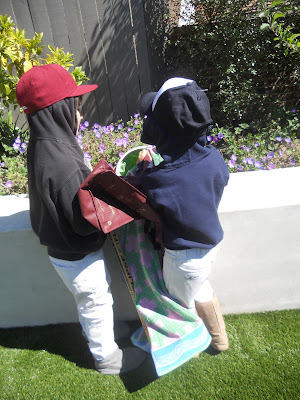 They run off  to the backyard armed with hockey sticks and nets and towels and bags, wildly waving and whopping them around, just narrowly missing each others' ears.  And somehow they don't get stung. 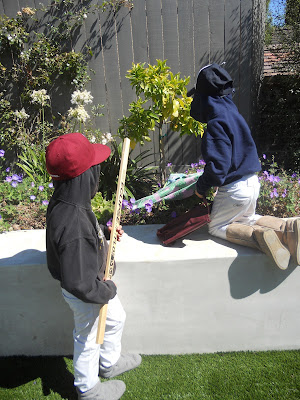 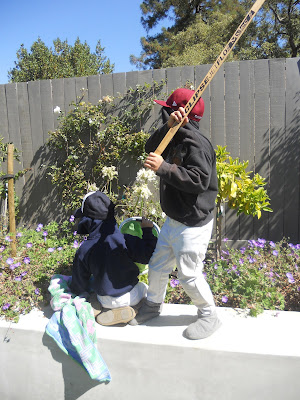 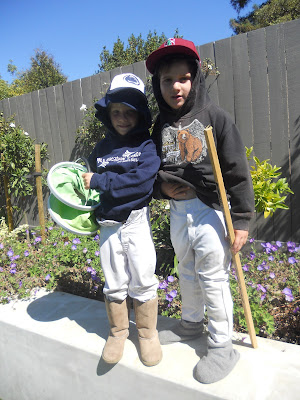 Later that week at John John's house, they hop on their razors at the top of the hilly street and just zoom straight down, going like the clappers. Again miraculously no injuries... (Photos by Monica Marcone) 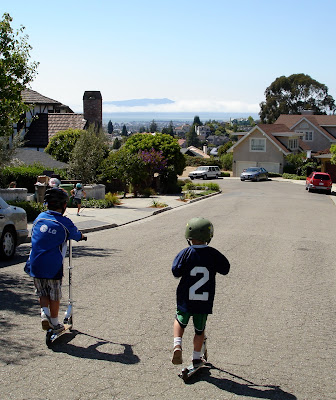 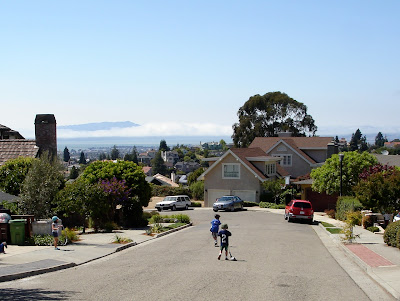 But what really kills me is their quaint old guy conversations. Their conferring, nodding and counselling in the back of the car, which I hear when it's my turn to drive the carpool. The other week we were dropping John John off at his house after soccer practice:

Cy cried out: "Oh you've decorated! And you've got the spider webs. And pumpkins!" he said enviously, "Mum we've got to carve our pumpkins when we get home"
"Oh, not just yet, Cy!" said John John "Wait to the last minute, they'll go all bad and squishy."
As John-John opened the door and headed inside his house, he called out again for good measure: "Cy! Decorate - Don't Carve!"
Cy, strapped into the back seat,  nodded his head sagely as though they were sacred words sent down to Mt Sinai. "Hmm,  decorate, don't carve..."
Posted by About Last Weekend at 5:21 PM