It was a right Royal (Tenenbaum) weekend that was so chocka full (for me) that I had a croaky voice by Halloween night. Which is just right for Margot, the mopey Tenenbaum daughter who had been secretly smoking for 20 years. Pic by Monica Marcone. 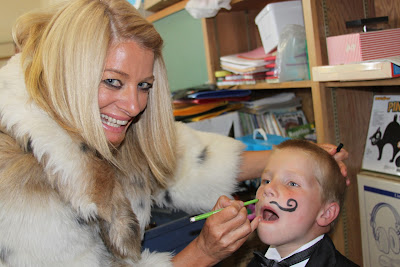 I had remembered to buy a black eyeliner for Margot's morose raccoon eyes and The Waiter's (aka Cy, six) "mushtache".  But other than that I had left everything to the last minute. I got the idea for The Royal Tenenbaums  - a 2001 movie about a kooky family of former child prodigies who re-unite when their estranged father announces he has a terminal illness - reading an intriguing blog called The Prippy Handbook. First pic from the movie, second from Harpers Bazaar shows the Ronsons as The Tenenbaums and then us. 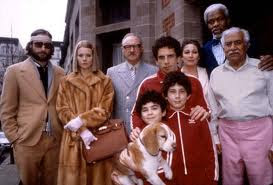 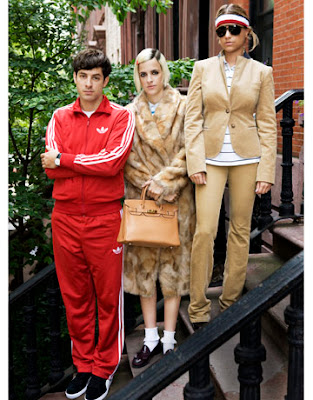 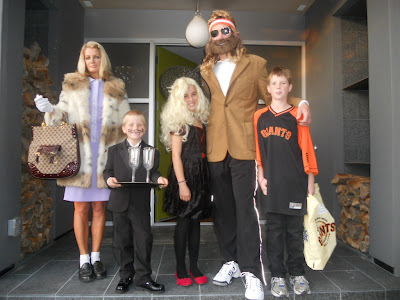 As luck would have it, I found a violet Lacoste dress ($10) hanging outside a vintage store called Mercy. It had to be 70's  Lacoste dress and I am determined to wear it IRL (in real life) as blogalog persons would say. It's polyester status was confirmed when I washed it. Honestly, it took ten minutes for the water to seep through - the water just stayed on top of the dress - and wringing out took just one twist. You can be sure if there is a nuclear meltdown, this dress with survive along with ivy and cockroaches. Inside the store was a faux fur jacket which I also thought I might even wear also IRL.  I borrowed a huge "Gucci" bag (from Dubai) with black penny loafer type shoes from a friend and that was all needed. The spray tan is all wrong -  best to be pale - so I cheated a bit. 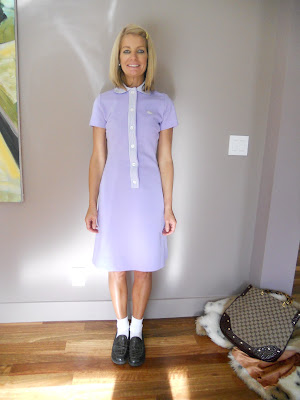 Kevin was trickier as Richie a former tennis prodigy in love with depressed Margot. I couldn't find his straight draggy-hair plus bearded-look anywhere. By the way, amazingly this bearded tennis player look is the hippest hottest thing in clothing campaigns here!
I couldn't find it even at the Spirit store.  For all my friends in London and New Zealand the Spirit store is a revelation. Open a month before Halloween, it sells everything from a zombie baby eating a hand to fog machines, Freddy Krueger robots and kinky boots.  So I had to settle for a dirty blonde mullet which he could crush down a bit with a head band. Beautifully topped off with a beard from the kid's dress up box. 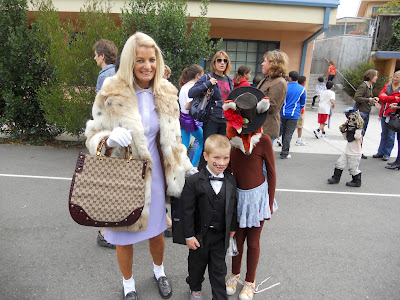 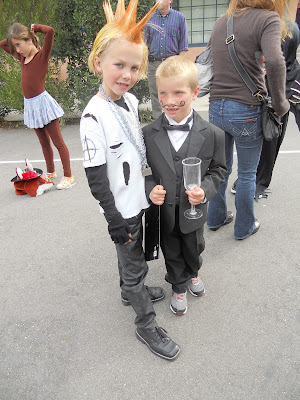 It was night of milestones. Suddenly in one year the kids have grown up. How did that happen? After eight years of chasing waddling ducks, princesses and superheroes all over parades and parties all over town for hours and days on end, rising the waves of sugar high followed by meltdown, this year was relatively quiet and civilised for the kids. (I on the other hand went out for five nights in a row...with maybe maybe one teeny bit of meltdown).

Only Friday school parade drew the tears and wobbly lip for poor Tallulah. At age nine she has firmly graduated from fairy pink to wanting to be an inanimate ohject like a book or a pumpkin. I found neither and of course if I had been a better mother I would have made the book costume. But I rather liked the jauntiness of this fox head. Tallulah has some major malfunctions with her fox head wobbling all over the place and she ending up tripping over in the parade.  So it was yet another trip to the Spirit store for a generic witch outfit.  Lesson learnt: never pick a costume without the child being there.  By the time I really get a handle on this Halloween stuff they'll be out of the house.

That afternoon, ever the stylist, Tallulah carefully placed her pumpkins and fall bits and bobs on our steps with the help of her bossable assistant, Cy. 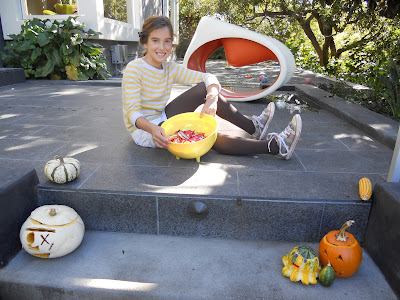 That night was more charming than scary on the road where we go treat or treating. 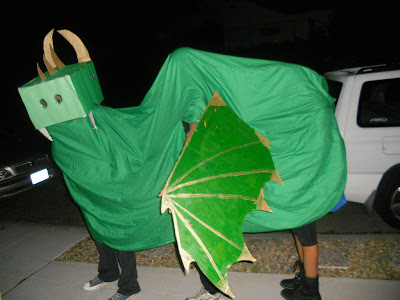 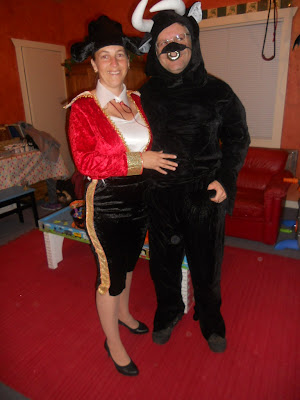 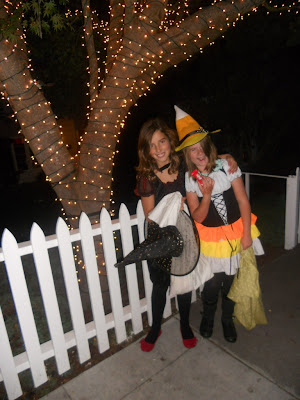 On Sunday Trick Or Treat night Harley, 13, opted to stay home with friend Tommy to watch The Giants baseball team draw one step closer to the the World Series. (We called home during the night and his friend called out from the background. "Dude - great party!! When do you parents come home?" What dags those boys are). Meanwhile the streets seemed less busy than last year - was everyone home watching the game?  The loudest din was the sounds of TV from people's garages and calls of "They're down in 10 and out in the 67th inning with two down and three sideways..." Or that was what it sounded like to me, someone who doesn't know anything about baseball.

There were flashes of Jackson, 11, as a Giants fans running along the street with his friends. Jackson calling out "Safety first!"Ironic surely? 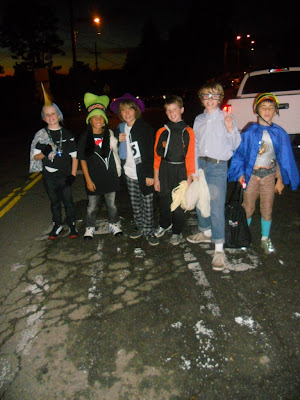 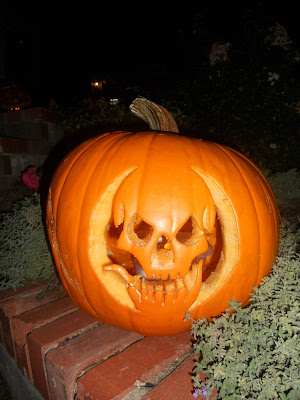 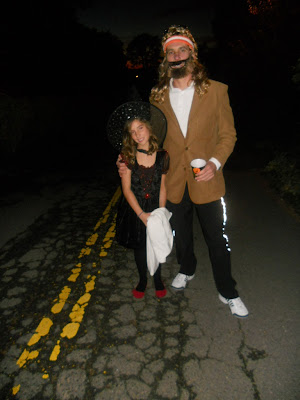 Kevin's mother was ill in hospital in Pennsylvania. So he had to head off to the airport, mullet wig and all. By 8pm I was ready to go home and Jackson and Cy meekly following behind exhausted and ready for bed.

The next morning no one put up a fight as I allowed them five pieces of candy, one for lunch every day and threw out the rest. I was quite sad and it was a bit spooky possums knowing that I had no little winkies anymore. Sort of. As they said on the promos for The Tenenbaums: Family isn't a word, it's a sentence. Sheer profundity which shurely means: "How 'bout those Giants?"
Posted by About Last Weekend at 4:18 PM