With the holidays coming up - and a World Series win for the San Francisco Giants! - there's never been a better time to crack open the bubbly. 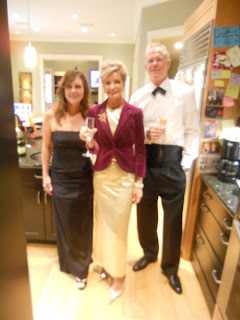 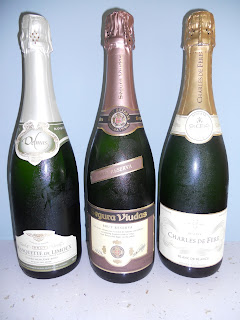 Sparkling wines have come a long way since the days of Cold Duck served in broad-bowled glasses (falsely) attributed to Marie Antoinette's breasts.

This week in my Wineau column (wines under $10) for the East Bay Express we taste three fun and frisky sparklers.

On a Saturday night in October, a group of us pulled on our poshest frocks and sharpest tuxes and headed off to the Human Rights Campaign Gala in San Francisco's glitzy Fairmont Hotel. With the fanciness of the evening and holidays coming up, it seemed a fine time to try out three sparkling wines.

During what turned out to be a night of silliness and shenanigans, I lost my camera, which contained the filming of our tasting (some might venture that was a good thing), but those are the sort of wild evenings you're often in for when drinking bubbly. Fortunately, we're (mostly) the better for it. Bit of a ring-tailed tooter, as my Southern friend Ross calls it.

Bubblies have come a long way baby since the days of Cold Duck served in broad-bowled champagne saucers, the shape of which has been falsely attributed to the shape of Marie Antoinette's breasts. I was looking for some really smashing sparklers, rather than ones that cried out for the cover of orange juice, so I headed for the Wine Mine (5427 Telegraph Ave., Oakland), which I already knew has a good selection.

The first we tasted was a Cava from Spain, Segura Viudas Brut Reserva ($8), which was created from a blend of reserve and non-vintage wines and aged for at least three years. It's the one we often use for large parties at our house, or for mimosas, and is very clean and delicate with a hint of yeast. It's not a big bubbly, but good enough to drink by itself.

Next came a Delmas Banquette de Limoux Cuvee Berlene (2007) from France ($9.99). It offered hints of green apple and lemon with a slight dryness and a creamy nuttiness at the finish. The bubbles caught our eye; they were small, persistent, and very festive. I can see why this wine inspired one British journalist to ask, "And why is it, did you say, that champagne is so expensive?" You can see why it is so complex: These people have been making bubbles for ages. Limoux was the first in the world to produce bottle-fermented sparkling wine, some 137 years before Dom Pérignon took credit for the discovery.


The third was a Charles De Fère Blanc de Blancs Brut ($9.99), from the Loire Valley in France. Made from Sauvignon Blanc and Chenin Blanc, it's pale-gold in color and has tropical fruit aromas. We liked the even balance between acidity and sweetness, and again the bubbles lasted a nice, long time.

So three good choices, at less than ten bucks a pop. After my hoot and a half of a night I won't be drinking bubbly for a very, very long time. Until this Saturday night at least. Be rude not to — it's the festive season!
Posted by About Last Weekend at 2:43 PM