I have become a teeny, weeny bit obsessed with Emma Pillsbury. Not so much the germ freak, grape polishing side of her...though doesn't that make her all the more human? No, it's her sense of fashion which is - and I don't usually use this word - adorable.

I'm talking about the guidance counsellor in Glee's McKinley High who is also Mr Schuster's love interest.  Her wardrobe, according to fellow blogger, Lavender and Lilies is mostly from J Crew and is sometimes monochromatic, always colourful, always lady-like and usually dotted with bees, bows and flowers. Her picture perfectly fitted style has even inspired a fashion blog called What Would Emma Pillsbury Wear?  (All Emma pics via wwepw). 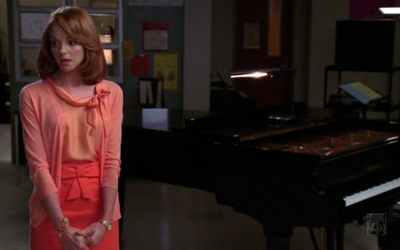 How does Emma Pillsbury wear sometimes up to four bows  - that we can see, could be more -  and never look bizarre or theatrical? I was fully embracing the bowlove this Friday with my new purchase, a Kate Spade gold dress. 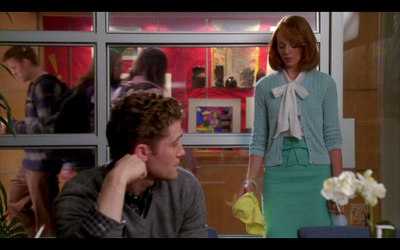 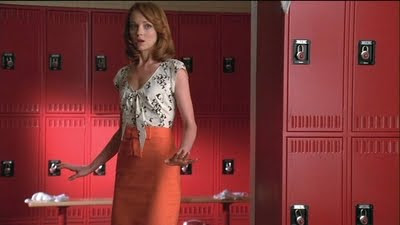 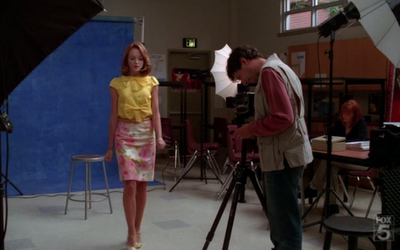 Okay so I had fully convinced myself that I need NO more going-out clothes. I had enough "good clothes" for goodness sakes - while I was folding Cy's underwear last week had I suddenly morphed into a socialite? So what was I doing in Bloomingdale's at 10.30 on a Monday morning, you might ask.

I knew I was in trouble when I saw this Kate Spade gold dress. I left a phone message with two friends: "I can't buy this...but it's less than half price... it's casual enough to do lunch (I never do lunch) and it has bows!" Neither called back. I bought it...and I might have ordered the cream cardigan too. Had bows. I was temped to buy this or this bow necklace but somehow stemmed the bowfest flow. Nude shoes are a wardrobe staple so must have, say friends. 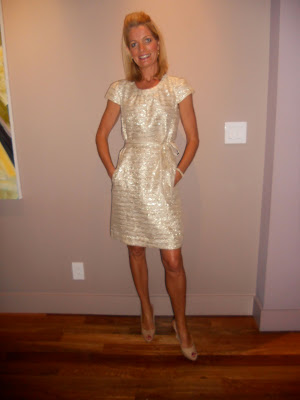 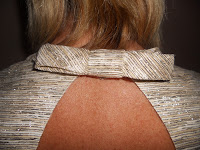 So it was bit sheepishly that I donned the bow dress this Friday for my friend, Vicki's, surprise 40th birthday party. Vicki is one of the mums at the kids' school and like everyone else is crazy busy but always remains sweet, kind and incredibly funny. She is also one of the people behind a cutely named ice-cream called Skinny Cow that has way less calories and sugar.  Oprah loves it so can't say better than that. Anyway Vicki was the consummate happy birthday girl; she was incredibly surprise! surprised, then laughed ...and cried. (Pics two to five by Sarah Holliman.) 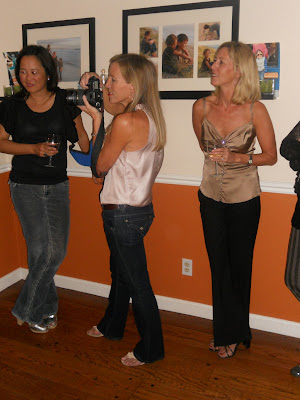 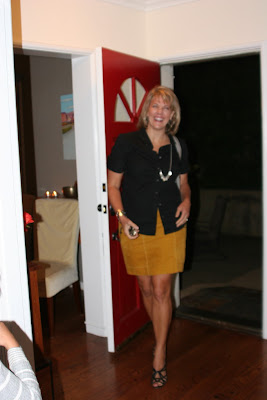 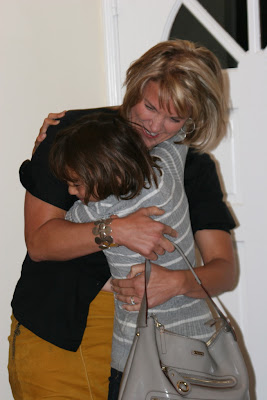 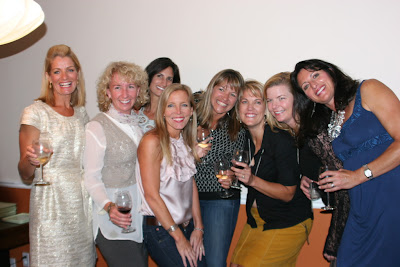 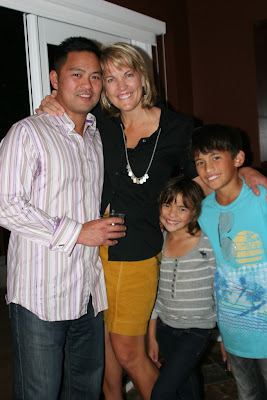 Saturday we were off to a new Sixties-inspired restaurant in San Francisco called Thermidor, named after the dish of that decade, Lobster Thermidor. I pulled out a five-year-old Louis Verdad skirt and top that had always seemed a bit too ladylike for me. But with Emma Pillsbury at my shoulder, updo and nude heels I was good to go... back to the Sixties. 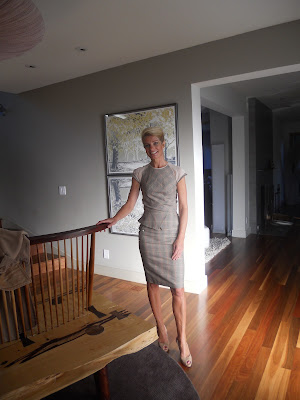 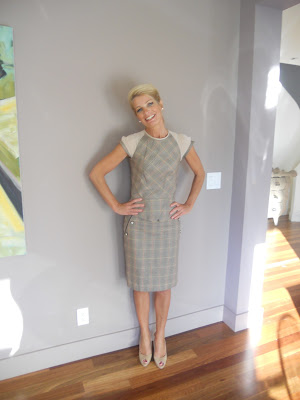 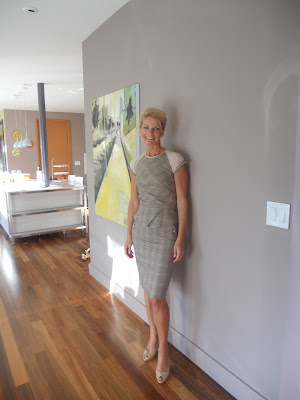 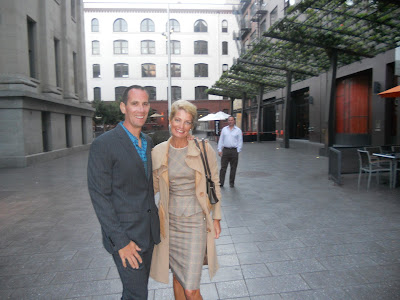 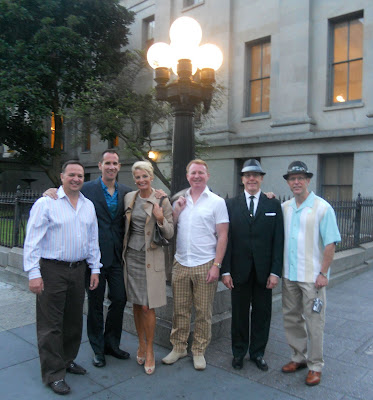 As one review of Thermidor says, I really wanted to like the place more. It had an intriguing menu including "coffee, donuts and cigarettes" with tobacco infused candy, Chips and Caviar, Celery Victor and roasted cauliflower. I wasn't sure which Sixties it was though -  not Country Club prep, not Mad Men slick and clink. Was it Beton Brut? I get the Brutalist thing but would prefer it warmed and updated. The designer would be horrified to hear this, but it definitely needed a touch of Emma Pillsbury and a whiff of the Pussy Galore.  The raw concrete walls and knotty pine were cold rather than dramatic with the only adornment being logs with lichens.  The swivel chairs were comfy, and maybe even authentic, but looked cheap.  The others liked the interior so maybe just fussy me. 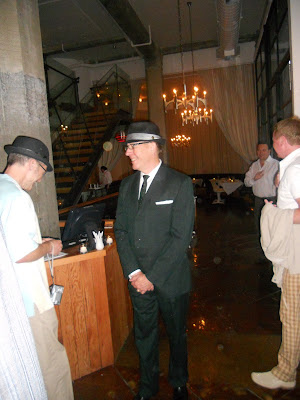 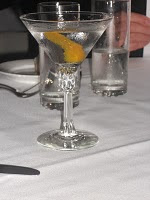 The service was great - our waitress used to be a third grade teacher so knew all about The Ninth Planet orangey cocktail in terms of whether it was Pluto or not. (It was and now isn't, apparently). Three of our number loved the Vespas - gin and vodka with a splash of Lillet, shaken over ice. A favourite of James Bond.

It was $160 per couple with drinks, oysters and two courses. It's no secret the food of the Sixties was gooper rather than Stirling and needs to be freshened up. I wasn't sure if this food was quite bright enough for the prices. Good but not great.
The sole with almonds and corn had a pleasing enough crunch. The Kumomoto oysters were delicious ($25 per dozen which is "reasonable" compared to other restaurants) and the mignonette dip was the best I've ever tasted, tangy and complex. The pork chop with pluots was moist and flavourful, Mike found the spaetzle dry and I found it sparse and oily so not sure what was going on there. The Chicken Kiev had nice flavours but was dry.
But being a lady for the night, I didn't grouse about the small things. I just sipped my drink, happily patting my depenaille chignon. Emma would have been proud.
﻿
Posted by About Last Weekend at 9:07 AM