Happy New Year - it's the day after here in Ohope Beach, New Zealand,  which means I toasted you all last night! Being so far down on the globe and with our bit of the coast jutting out - sorry about the very technical explanation -  we were the first ones in the world to see the New Year. And I'll tell you, every bit of 2011 has been good. This is going to be my year. Especially as I acquired some new life philosophies from the Bay Of Plenty's horse whisperer John Fairbrother. 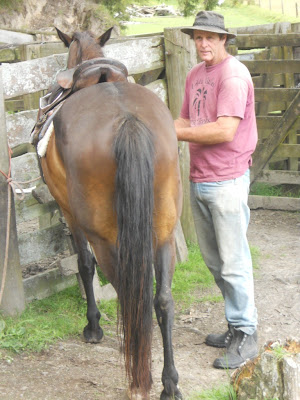 John of Nikau Valley Horse Treks is an old school Kiwi guy, he looks like he's been out in his tractor boots and floppy hat roaming the hills since he was three years old. What's not old school about him is how he is with horses. With a gentle nudge of his heel and a single word his horses will stop, go, turn and slow down. He waits and waits and waits until his horses get it and you get it and the constancy of his patience is like the sounds of waves after the drone of TV.

Yesterday we drove the ten minutes along the river and up the farming valley to John's farm which is next door to our pine tree farm in Taneatua. First we stopped off at our farm and Dad collected some potatoes and lettuce from his vege garden. Then it was off next door to do the two hour trek with our little group - my sister Pietra, Tallulah and her cousin Leah, both nine. 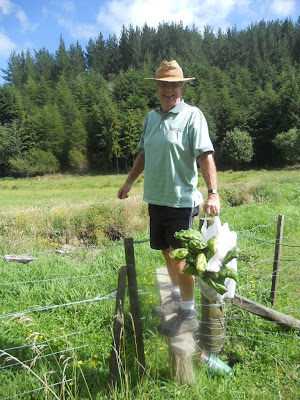 We found John and his family friend Louise, who is originally from Kent in England, saddling up the horses. Tallulah, the urban girl, hesitantly reaches out to the horses over the fence. Both of the girls were giving each other a bit of advice on riding, Tallulah had done it "millions" of time (though I only remembered once ) and Leah has just returned from Argentina where she apparently rode in the Andes: "Will there be a Gaucho" she asked. 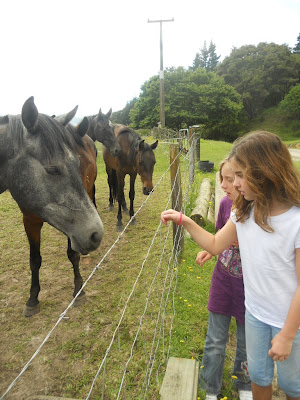 Then the girlies follow the lines of ducks to their ducklings and take a good look at the cow pats, Tallulah says  "Eeeew" in her Californian accent and Leah says a Kiwi yuck. 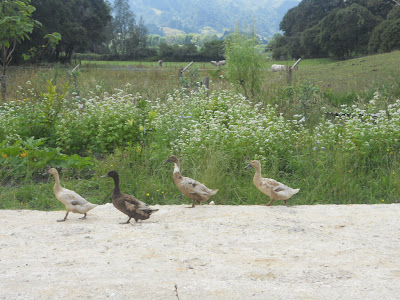 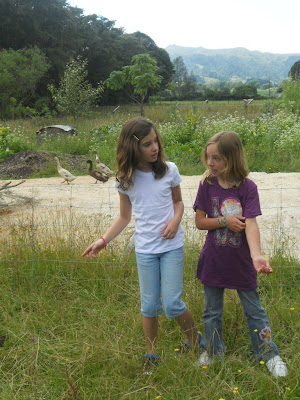 It has to be said my experiences with horses have not always been positive. At age 13 after much whining and needling on my part my parents finally relented and bought me a horse. My new pony - 13 hands by memory -  came from the far reaches of "up the coast" beyond Te Kaha.  We called her Squaw and she was beautiful with brown and white markings, skewbald I think they would call it. Within hours she had me sussed, sorted and beat. I read about the dreamy bonding of horse and girl in my English boarding school novels. Unfortunately Squaw had neglected to read the same books. "Contempt" was the word for how she treated me.

We found out a year later that she had never been properly broken in.  Consequently I never really learned to ride, just to hang on for dear life as she galloped off towards the other side of the paddock, only briefly stopping to do a 360 to swipe me into the fence. She would be skittery spooked on the roads, then refuse to walk altogether and no amount of coaxing, pleading and kicking would change her mind.

A year and many bruises, bites and kicks later, we knew my horse riding days were over. Squaw had won. My brother rode her for two hours to a horse auction deep in the countryside. The ride must have exhausted her because by the time they arrived she was so placid and obedient that she was purchased by a riding school.  Either that or she was faking it to get away from the weird Anglophile teen that was me.

Twelve years later when I was living in London, my friend Rina and I travelled to Wales for a weekend mini break and we found ourselves signing up for an afternoon horse trek in Wales. We thought it would be a great way to view the rolling lime-green hills dotted with churches, the wet Welsh air whipping the strands of our hair which had escaped our velvet riding hats.

Of course we were wearing our ratty old jeans and jerseys but that didn't stop me dreaming about mounting our steads with those fitting beige jodphurs, our rippled sweating horses cantering off over the fields, narrowly missing the path of the local Lord and his friend the Marquis who, impressed by our turn of ankle and spirited ride is so instantly captivated by us, they both propose marriage, propelling us into a life where we are get to  - nay, are expected to - order servants around,  hob-nob with the Royals and say stuff like "Nay".

Nah that never happened. The wet wind whips me back to our day in Wales. The farmer and his wife blopped us on the horses, which seemed rather rotund and very windy, even in repose. We slumped around the flat paddocks a little, our old chubby horses waddling a few steps then stopping to eat. Then resigned to their fate they fell in a nodding line, each step a testament to the word "plodding". After an excruciating two hours of this, the first one, which an optimist might call the "leader" saw the home stretch,  a little bit of a afternoon snooze and more munching in his future and broke into a very slight trot. The others followed and jiggled in a similar fashion towards the farmhouse, their flatulence building into a happy crescendo, like a army of huge deflating blimps.  Rina and got down off our steads with a thud. "All I wanted" said Rina, sadly  "Was to call:  Whooooah there my beauty!"

My sister Pietra had last ridden while filming a documentary in the freezing mountains of Afghanistan so slightly trumped my gas-filled afternoon in the Welsh hillocks, but we were at about the same level with getting on the saddle. Grip, grunt and hope for the best.

And so that is why I'm even more impressed with John's calmness. With Tallulah and Leah, he showed a still patience that was almost religious.  He waited and waited until they realised they had to keep their reins down and a pull on the left made the horses go left. Not fussing, yelling and spluttering as I would have done. After saddling the horses, he introduces me to Ember, son of another kind of fire. I was hoping Ember would prove to be more glowy than sparky. 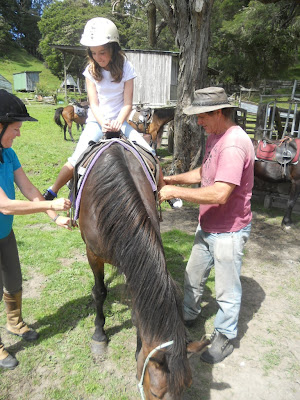 John tells us the most important thing: "Horses don't need friends, they need a leader". Well yes, bit of a problem there. Noone wants to admit they're a follower but at nearly 50 years old I might have to. I don't want to be the first, I just want you to make a decision, then look in the rear vision mirror and pontificate.  I was rambling angst about my lack of leadership when John introduces another gentle tip "Talk with your hands, not with your mouth".

And the best, which should work on kids too: "It's not what you do,  it's when you stop doing it" When you ask a horse to go, you squeeze with your legs. And when it goes, you stop squeezing. As he points out: "Otherwise it's asking the kids to do the dishes when they are already doing them". This is not a situation I've ever found myself with my kids but I desperately try and visualise.

You see horses need to interact; when one takes off it sends a signal down to the others to take off too. This is how they survived in the wild,  one awake and on duty while the rest sleep. "Horses have memory but no initiative" says John, they are awaiting our instructions.

So I introduced myself to Ember is a Churchill kind of way, not trying to please and be his friend just the person with leading hands and not the endlessly rattling mouth. 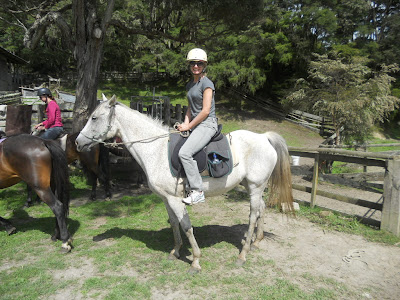 C'mon Tootie Frootie! I called back to Tallulah on Gem. "OOh Mum" she calls forward, cringeing. Don't call me that" she said, "That's not a leader kind of name." The girl has got it.

We traveled for two hours through Nikaus and tree ferns, along streams and ponds. As Louise said sometimes the forest looked like we were in England and sometimes in tropical Asia. Louise told me that in fact horses were a matriarchal society which is what I love to hear. 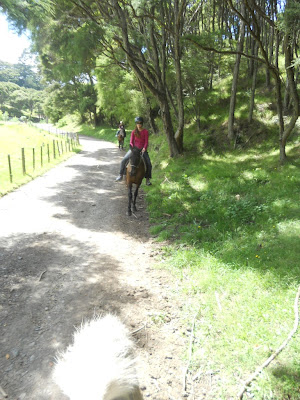 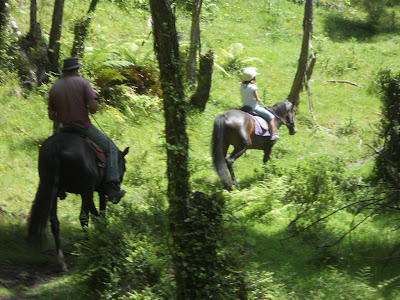 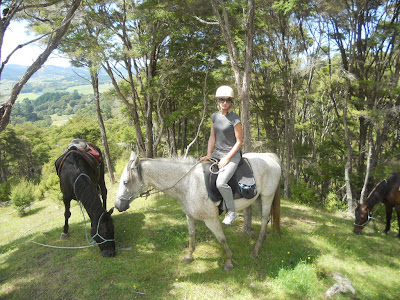 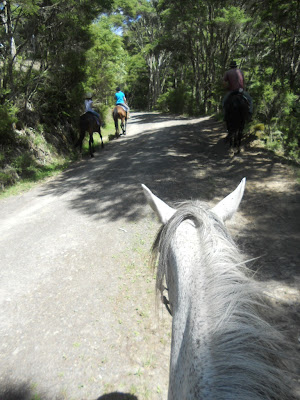 Because of my time with Squaw and because horses are such sociable animals and travel so closely to each other, I always worry about being kicked.  Louise reassured me: "There is some argy bargy in the field" she said when they're vying for pole position but not when they're  travelling in a line. There was a few quiet explosions from each of the horses along the track but not Wales. John explained that horses have very crude digestive systems and everything slips right through them which is why they have to eat 80% of the time and their manure is so pure and good for the garden. 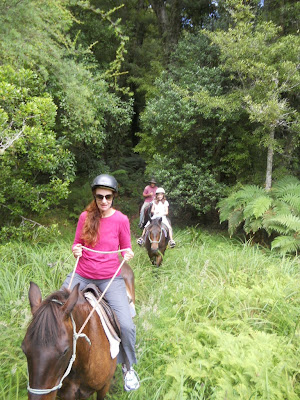 By the time we were home, our feet, backs and knees were aching. I was not sure if I had acquired a good seat or good hands but they were good and sore.

Last night for New Year's Eve we had a low key night with Mum and Dad neighbours, Marion and Jack. The little girls braided Pietra's hair and we ate Greek salad and barbequed lamb. 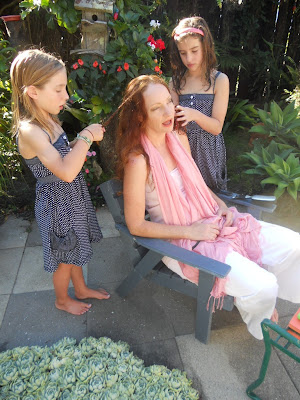 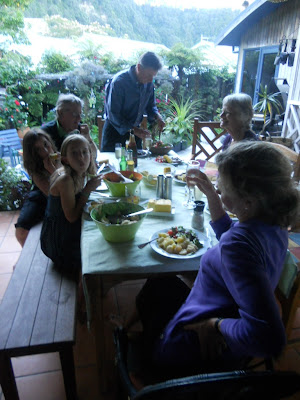 With all my new leadership skills I was ready to greet the new year -  determined, definite,  never looking in the rear mirror. New Years Resolutions? Hmm I might wait to hear everyone elses' before I decide. The Camino pilgrimage in Spain was a popular choice so I called that one too.  I couldn't say "get my handicap down to a 12" as Mum had, so I just threw a wild thing out there: Get 10,000 clicks per day on my blog by the end of the year. There was a stunned silence: "How're you going to do that?" they all asked incredulous. (I noticed noone said: Gosh, well of course that's a given)