Have you ever tried those wines you find everywhere, even in Pharmacies?

Below is my East Bay Express Wineau column (wines under $10) on Woodbridge wines. Does easy to find equal peace of mind? 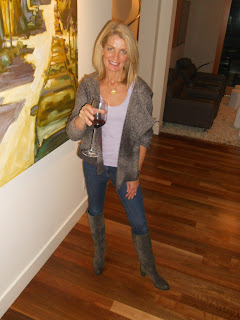 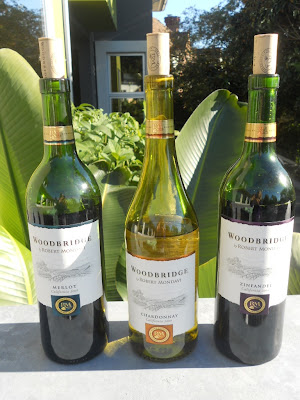 Woodbridge and the Path More Taken
Do easy-to-find wines equal peace of mind?
By Jody Brettkelly

Some bargain wines you see so frequently and in so many places that they become a piece of the shopping wallpaper. And somehow, you never end up buying them. For me, Woodbridge wines by Robert Mondavi are the perfect example. They're instantly recognizable to even casual wine shoppers and bear a simple but classic label featuring a tranquil scene from Lodi, California, of a bridge over untroubled waters and undulating hills of vineyards.

These wines can be found seemingly everywhere for $7.99: Try BevMo, Walmart, Rite Aid, Target, Trader Joe's, Safeway, or CVS, for a few. Because they're so ubiquitous, they may not have earned a place on your shopping list. But in the interests of good journalism, I felt I really should get to the bottom of Woodbridge's wines.

Reading the PR bumph for the wines, I immediately warmed to the philosophy espoused by Robert Mondavi, who died two years ago. He founded Woodbridge Winery at his home in Lodi in 1979, aiming to make wines that could be enjoyed as a part of daily life. A glass of "everyday wine" on as many tables as possible seems to me a refreshingly democratic ambition.

The label on the 2009 Chardonnay says it should smell and taste of pear pie, and it did slightly. It was a very easy drink with a touch of butter and fruit. As my husband Kevin put it, "You won't wow your guests with this, but it's perfectly fine."

With the 2008 Zinfandel, I could smell and taste pepper and a hint of chocolate and cranberry. It was very soft, smooth, and drinkable. Kevin agreed it was peppery and smooth, but less like a Zin than a "peppery Pinot."

The smell and taste of cloves and boysenberry dominated the 2009 Merlot. It was much deeper and richer than the Zin. I generally liked it, but Kevin did not go for the overlay of cloves: "The cloves are an unusual taste; reminds me of mulled wine," he said. "I like mulled wine sometimes when it's cold out, but I don't want to be reminded of it when sipping Merlot."

None of the wines were as full, complex, and tasty as what you'd normally expect of these varietals — but they were very drinkable. Sometimes what you need for the night is right under your nose.

Posted by About Last Weekend at 6:12 PM