Maori, the native people of New Zealand, call food "kai". And for two weeks we have feasted on the most glorious kai down the length of the North Island from Auckland to Wellington. 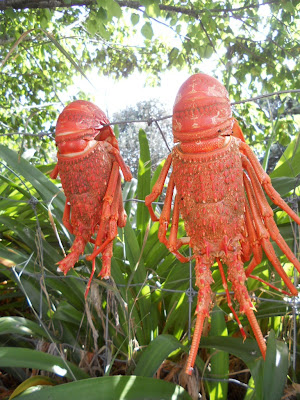 One of my most memorable meals of the trip was cooked by my old Uni friends Georgina and her husband Snow, at their weekend place, a winemakers' cottage in the vineyards of Martinborough just north of Wellington. They had just arrived back from the coast with two crayfish (rock lobsters).

Snow had been instructed by the divers to clip the lobsters' legs and hang them on the fence to drain. It must have worked a treat because they were meltingly more-ish. Was it Snow's fine touch, or because we ate in the vineyards' fragrant air or because we were laughing so hard about Snow and George's journeys through the Middle East and Europe, their travels occasionally intersecting with mine? 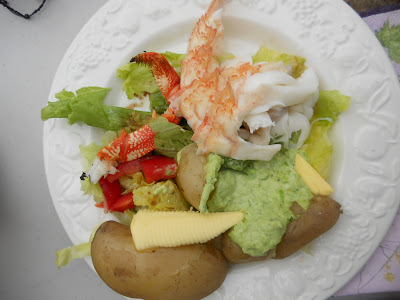 While the lobster was hanging, Snow made our starter - paua (abalone) which is described by Wikipedia as a large edible sea snail ....jeepers. He fried it up with lemon, garlic and ginger and it was tender and tasty without being too fishy. 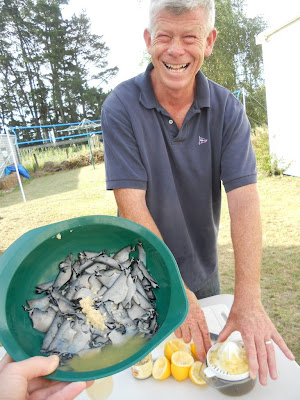 Meanwhile their eight-year-old son, William, was being the consummate host teaching my Tallulah, nine, to play badminton, croquet and finally cricket. After their triathlon of activity, the kids collected their bangers and white bread and happily settled down to chatter about food and life, William being a past aficionado of chef competitions and now Donald Trump. 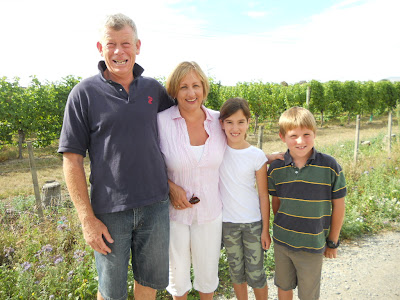 The next day we stopped for lattes at a cafe called Ingredient in the idyllic early 1900's town of Martinborough.  As in the East Bay, people take their cheese seriously here and I was fascinated to read the bios of the producing cows and view their photos which revealed them to be terribly pretty and fine-featured as befits a cow with a look-book. We were told that they are fed morsels of crushed garlic and unusual herbs such as chicory, tonic plantain and yarrow. Molasses and seaweed were also introduced to their diet to infuse the cheeses with another interesting something else. 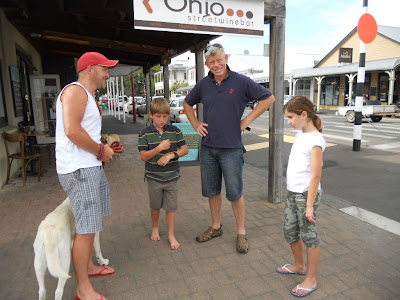 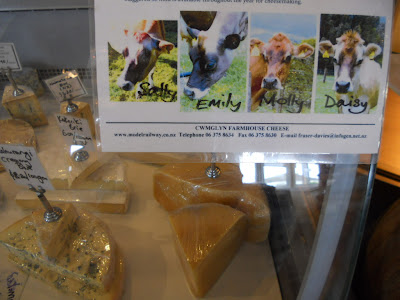 Further north in Whakatane we had the chance for more seafood. My absolutely ultimate meal is battered fried oysters with a sprinkling of chips (fries), fish and lashings of vinegar. We grabbed some wonderful fush'n'chups'n'oysters from Wally's on The Wharf . And then we dined - as my father would say - with Al (Fresco).  At The Heads ,  the spirit of a local heroine has been embodied in a statue perching on a tall rock.  Legend  has it that when the first Maori people rowed in from Hawaiki many centuries ago, the men ventured ashore without properly tying up the waka (canoe). The canoe started floating out to sea with the women and children. Though the oars were tapu (sacred), a woman called Wairaka grabbed one and cried Kia Whakatane Ahau! "I will do the job of a man."

Well certainly I have never shown as much bravery...but if I keep eating like this I will soon be sporting a very mannish belly. 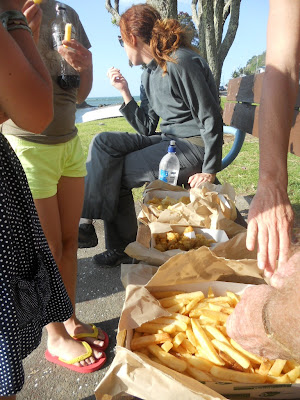 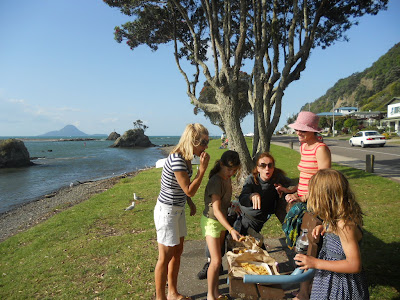 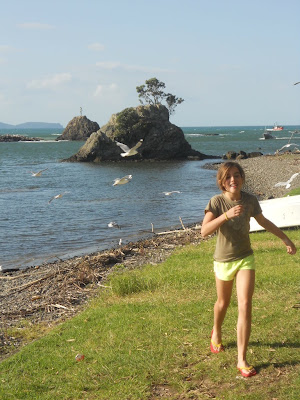 A more elegantly plated version of fish and chips (though no more tasty) can be found at Auckland's trendy Takapuna Beach Cafe on the seashore. The restaurant has curly light fixtures and the same Heaven furniture that we have on our deck in Oakland. 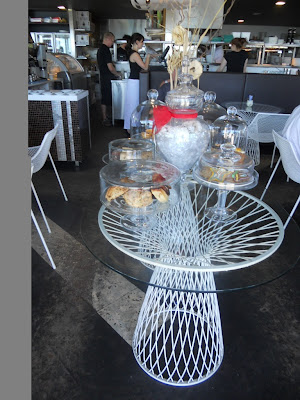 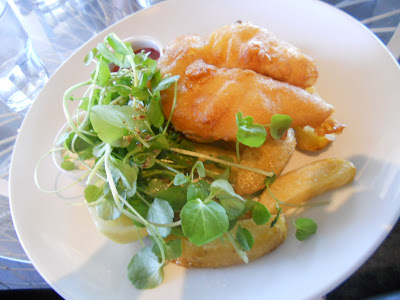 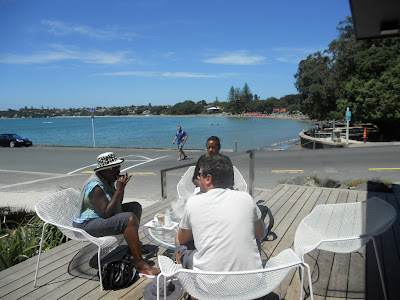 The squid was soft and tasty and the chorizo added an interesting piquant - what a relief it wasn't fried. 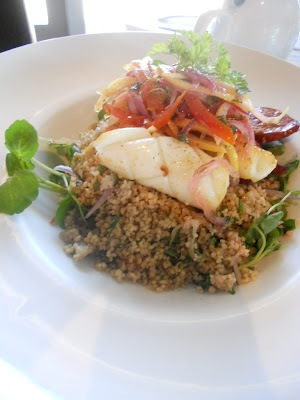 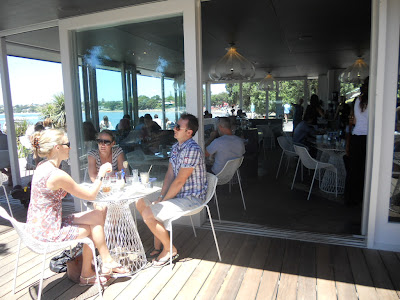 And of course the sweet stuff. The most wondrous ice-cream, cream, choccy sauce and marshmallow confections from Ambiance Cafe on the Kapiti Coast which had everything but...ambiance. 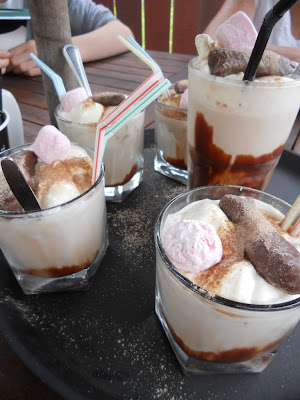 Slightly fewer calories reign on the berry ice-creams from Julian's Berry Farm in Whakatane. You know the ice-cream is freshly fruited when you're sitting right next to the berries. 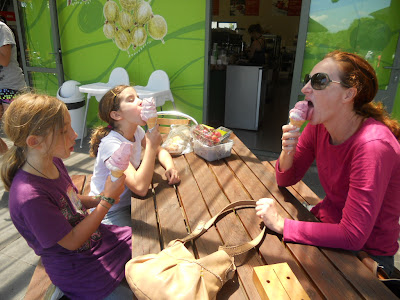 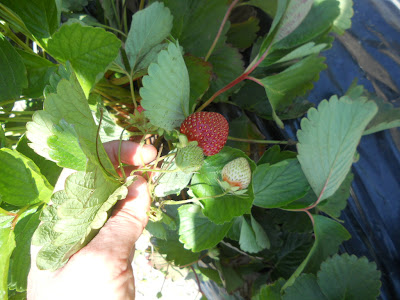 And finally my kids' pick for breakfast, lunch and dinner - a cereal called Weetbix, (named Weetabix in the US, maybe the extra "a" gives it sass?). These are brown grainy rectangles that we grew up with and I have always loved late at night.  Clearly the American version has loads more sugar because I found the Kiwi ones like cardboard. The Kiwi bix were obviously the real deal and much better for you but I began to discretely pile sugar all over them to approximate what I had gotten used to. (Tallulah pictured at Helena's house on Kapiti Coast.) Surely even the staunchest of traditions can sweetened with a spoonful of sugar... or two. 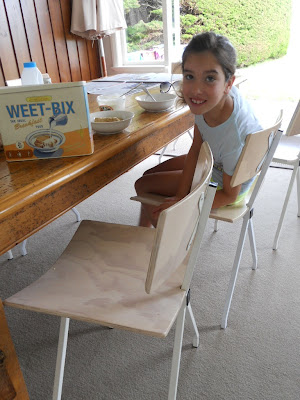 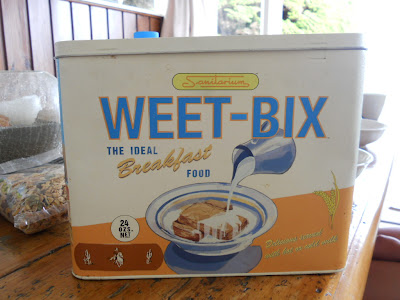 Posted by About Last Weekend at 1:32 AM