Hi, this is me, Kiwi Wineau, reviewing wines under US$10.

While I was in New Zealand we tasted three cheap Kiwi white wines - also available in the East Bay, California for under $10.

Which was the best? Find out by clicking into our Youtube tasting. 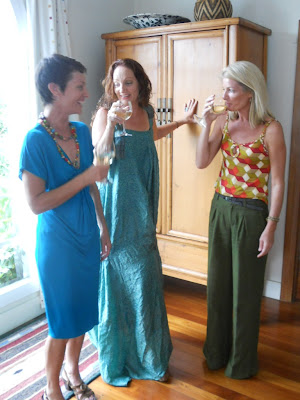 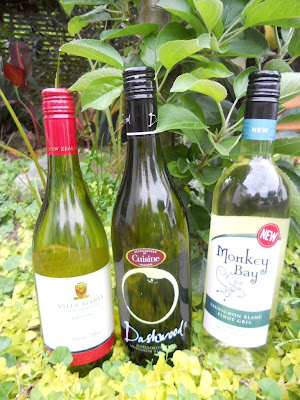 
New Zealand Floral
Doesn't rest on its laurels.
By Jody Brettkelly
I was heading back home to New Zealand for two weeks and instead of writing this column before I left, I thought how very nice it would be to taste some Kiwi wines right where they were born. Of course, everyone saw my excuse: It was pure and simple procrastination. As one old mate said, in the kindest possible way, "Jody, you're still that nineteen-year-old Uni student constantly asking for essay extensions!"

But my procrastination resulted in hours of extra work, as I searched the wine aisles of every supermarket along the coast. One might think it'd be easy to find three Kiwi whites under $10 that are sold both in the East Bay and in New Zealand. Impossible. The exchange rate, which now favors New Zealand, and the fact that many companies re-brand their wine for America meant I could barely scrape up three bottles after searching stores the length of the North Island, from Auckland to Wellington. Meanwhile, back in Oakland, my long-suffering husband put in loads of calls to East Bay stores.

And that's how I found myself in the Auckland apartment of my friends Kerry and Reece doing a Kiwi wine tasting, hours before my plane left for the United States.

First up was a Dashwood 2010 Sauvignon Blanc from Malborough, which can be bought at Beverages & More (multiple East Bay locations) for $9.99. The wine had been recommended by New Zealand's Cuisine magazine: people who know what they are doing, Reece promised. The bottle says it should taste of passionfruit and lime; there is a lot of lime, but I would have loved to taste and smell more passionfruit. "It won't stand a lot of scrutiny," said Reece, "but good enough." We agreed it would suit a meaty barbecue, including lamb.

Next was Monkey Bay 2010 Sauvignon Blanc from Hawkes Bay. With the exchange fluctuating, Monkey Bay can be purchased in the East Bay from BevMo and large supermarkets for under $10 when it's on sale. We found it pleasantly citrusy, but a lot thinner than the Dashwood, which would trump it every time. There was no discernible scent to it. Reece said it was "doing what is was supposed to, but not that interesting."

Finally came the Villa Maria 2009 Riesling from Malborough, which can be bought for $9.99 from Costco in Richmond (4801 Central Ave.). "I usually don't like Rieslings," Reece said. "But this is the go." No better recommendation from a Kiwi guy who knows his wines. Kerry found some floral, but not as much as you would expect from a Riesling. She said it was unusual enough to pair with fish and crayfish.

In the end, we were back and forth about first place. After being open to the air a few minutes longer, the Dashwood proved more complex. But, ultimately, the Riesling was the most different and surprising. Monkey Bay took third place.