How did these three Zins under $10 from the Safeway in Truckee taste?
Find out by watching the YouTube video of our tasting.
And below you can read all the details of our tasting in my Wineau (wines under $10) column for the East Bay Express. 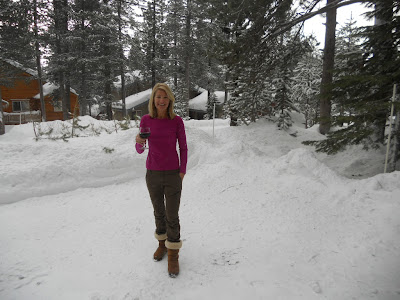 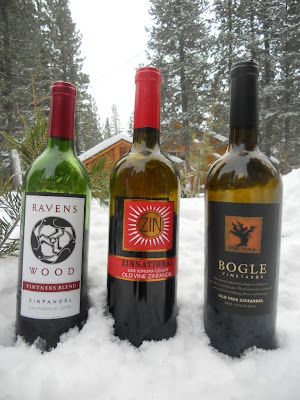 Of Mountains and Monopoly
Zinfandels aren’t always as big as one would hope
by: Jody Brettkelly
We headed off to Tahoe for skiing Christmas week amid code-red storm warnings and high winds. In the end, the drive was an easy three hours and we swept into Tahoe Donner none the worse for wear. Amid the bluffs and bluster, it was time to sample the good hearty wine that is Zinfandel.


The wine was a fitting choice because you can't drink too much in the mountains (altitude and dehydration) and have to make every glass count. Anyone who has been tempted by that one-glass-too-many in the mountains knows they’ll spend the rest of the night with eyes wide-open like a possum.
Our friends Anne, Cindy, and Cynthia drove over to our rented cabin to share a pot-luck meal of rosemary chicken, rib-eye steak, pineapple, and tortellini: a pretty unusual combination, but one that a good Zin should be able to handle. We’d picked up three bottles at the Safeway in Truckee, but all of them can also be found readily in the East Bay.


First up was Bogle Old Vine Graton California 2008 ($9.99). The vineyard’s old head-trained vines produce a smaller crop of fruit that can be unusually rich and concentrated. However, there doesn’t seem to be any determination on how old “old vines” really are. Regardless, it was a bottle everyone recognized. Cindy said it’s her regular Halloween wine. “We choose it because it's reliable, fruity, cheap, and very good,” she said. “To me it always tastes of Halloween, of Snickers bars.” The label even looks slightly spooky with a gnarly vine against an orange sky.
Anne liked its claret color: “I do buy this stuff; it's an easy Tuesday-night wine. Great also to put into your beef bourguignon if you don't want to use a $40 bottle.” She also uses it in Charlie Trotter short ribs with onion, leeks, and garlic: “You need to put in the whole bottle and this dish rocks!”  I thought the wine tasted a little of vanilla, with a hint of cherry.
Next was the Zinsational Old Vine Sonoma County 2008 ($9.99). With a name like that, you know it’s a wine that doesn’t take itself too seriously. Cindy found it to be lighter, with little aroma and less fruitiness than the Bogle. Anne agreed that it was not as robust, even thinner. I found it had a very tannic after-taste. We all agreed it needed to be eaten with a spicy or very tasty meat dish with plenty of garlic.
Finally came the Ravenswood Vintners Blend California 2008 ($7.49). We had all seen this one at parties. Anne pointed out that the vineyard’s slogan had been “No Wimpy Wines,” which I liked. However, compared to the Bogle, it was a little wimpy and thin, with no discernible aroma: definitely one to drink with Indian food.
So the last two wines need strong-tasting dishes to offset their wanness. But the Bogle is one you would look forward to after a hard day “shredding” the mountain — or rigorous day playing Monopoly in the cabin.
Posted by About Last Weekend at 5:00 PM