If you ever thought you were too old to learn to surf - just leave it to Beaver to teach you! I don't mean the boy in the 1960's US TV show who adventured in suburbia. No, I mean the surf instructor down the road from us in Ohope Beach who's called Beaver. Under his tutelage everyone learns to surf - well stand up and go along anyway - by the end of his classes at the By Salt Spray Surf School. And the secret is to do the Haka, a Maori war dance,  and then do the Hawaiian Hula. 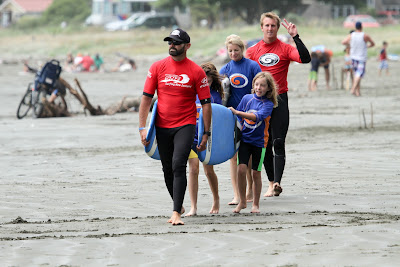 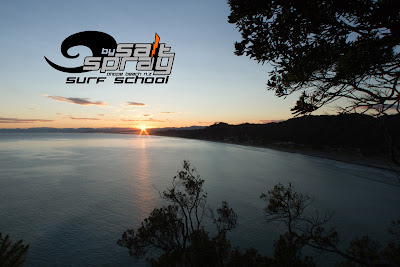 I wasn't totally convinced  I would stand up, but we were promised a sticker and certificate by the end of the class and I am a sucker for a nice sticker. Surely it also gives you the right to say Dude without fear of reprisal or sneering. Beaver is a man who has life supremely sussed; he teaches surfing over the summer, then heads to Bali with his wife and family to simply ride the waves for months on end. 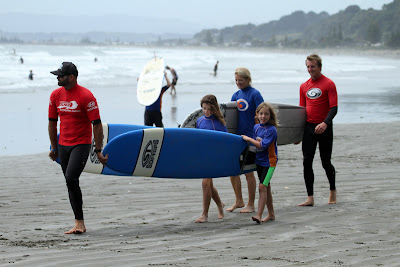 First off - how did he get that name. "My real name's Bevin, so I've always just been Beaver." So not the animal? I asked. No he said, and not because I swim like a beaver or smell like a beaver or - you know.... Yes, yes, quite.

Oh and what about the new surfing terms, I ask. "Oh, really, they're just the same as they always were" he said. Well, in my day, 30 years ago, they were "Rip, Tear and Lacerate Those Waves"...and something about "Radical Re-Entry" so I feel good to go with those ones, though when we start to practise on dry land it all turns to custard. 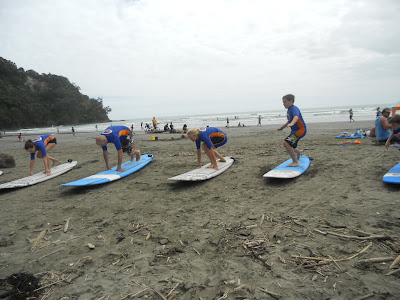 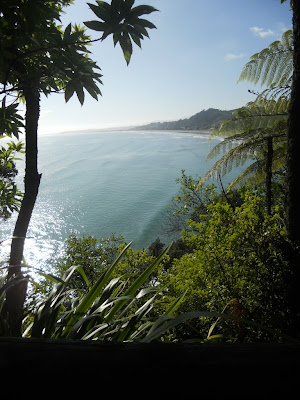 The drills start slow, then go faster faster. Tummy on board, feet up-turned at the back of the board, quick schoosh onto knees - then haka legs and knees aggressive and arms spread wide. Followed by the hula hips undulating with the wave. Not skiting (showing off) I suspect I'm going to shine when it gets to the hula... but it's a bit tricky actually getting there. Thing is: I'm having problems with the one-move schooshing from tummy to knees, so I do a bit of a three-step schlocking and hope noone notices. 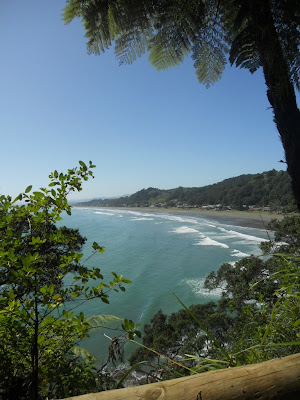 I would just write myself off as an oldster grommet (learner), but last summer at aged 73 my father was a graduate of Beaver's school, so no excuses there.

Out on the water, it all starts to make sense and with a bit of "Ohheeeeroohhherwahwah " I do get up, though, as the pics shows, with a too-earnest placement of arms and desperate smile. I had hoped for a rather inspiring soaring eagle effect, though I see from the photos it's more clipped Kiwi bird. 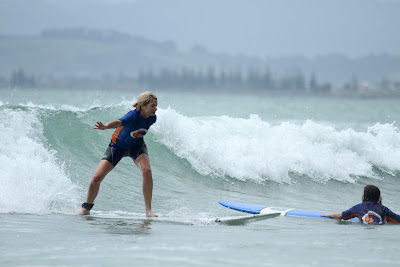 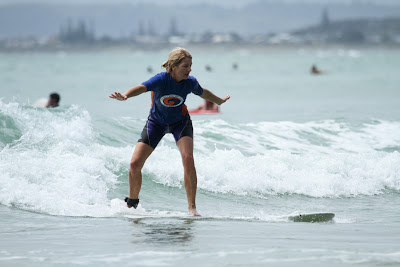 Tallulah and her cousin Leah, both nine, got it all together when they got together. 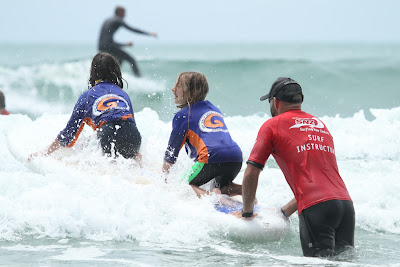 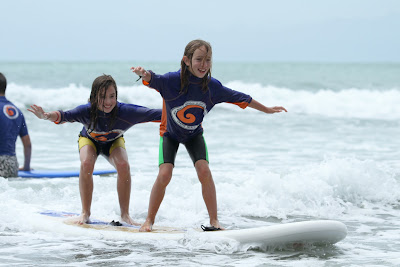 You might be starting to wonder why I've lived near or on Ohope Beach all my growing-up life and I'm a learner at age 48? Why don't I have 30 years of surfing under my belt? Why am I not known as the J-Wave or J-Seal or JoOcean. Truthfully, it was not as comfortable for grommets or girls in my day and when I had a few goes at it, I was razzed mercilessly.  Across the ditch in Australia Kathy Lette met the same resistance in her surfer chick days, but persevered and recorded her experiences famously in her coming-of-age proto-feminist novel Puberty Blues .

It would have been a brilliant idea if I too had tried to crack the sport, hang with the knarly dudes and write a best selling novel. Instead I went back to what I knew and was good at.  I became the Samurai Sunbather. Honestly there was noone who could sunbathe with greater skill and with more tenacity and consistency  than me. Hours of slow cooking in the sun - we're talking first light to dusk - slathered with Johnson's baby oil (and for the Samurai that included face and hair). Other co-sun-bathers dropped off by lunch time, early afternoon. Some toddled inside to watch TV, others to do their homework, others to play sports, the rest to simply pursue their lives out of the sun. Amateurs. I would remain at my station, my possie only altering slightly as the sun moved in the sky.

There was no reading - how could you, the sun had to reach each side of your nose and cheeks. Chatting was possible with face full-on but no gesticulating. It was the most satisfying activity in the world; the more time I put in, the more accolades I received: "Gor" even passers-by would remark, "your legs are so nice and brown". The legs were the part of your body which ultimately showed most, and particularly at high school where we had a uniform.  Other less serious sunbathers would fall for the obvious mistake of concentrating on browning their back. Too easy, I would think, obviously someone weak enough to lapse into reading and sunbathing. And a costly error - the back is seldom seen during a day at school.

"Heck" another would add "Look how even!" My legs were the brownest but generally I could pride myself on a sweeping unanimous golden brown.

Of course how could I have known real tans would come to be seen as cancer-ridden ugly masks and sunbathers as the lepers of the Nineties and the Naughties.  My long-term laying out would produce sun spots, untold wrinkles and my knowledge of exact positioning in the sun would become as redundant as tapes.

How, how, how could I have got it so wrong? It's been devastating.

Mind you, thinking back I also always thought Captain and Tennille were genius and would forever hit the Top Ten...
Posted by About Last Weekend at 5:11 PM