"Absolutely Positively Wellington" is one of the slogans for New Zealand's capital.
And flying into Wellington you'll see why the pioneering "She'll be right, mate" reigns supreme here. The winds were sometimes gale force, the rain often torrential in our past three days here. 150-step stairways everywhere - but everywhere - you go. This city is waaay more vertiginous than San Francisco. And noone seems to notice.


Above is the 100-step staircase to my friend's house. She and her husband have lived here for 13 years with four kids and no driveway. At one stage she was heavily pregnant with a broken leg and the pulley thingy that carries her groceries was broken too. "Oh yeah" she'll laugh when you talk about the stairs, brushing it off: "You get used to it."


I used to be an Absolutely Positive Wellingtonian too when I lived here for seven years as a student at Victoria University. All I remember is blue skies and sunny walks round town. "You must have been so fit as a student" said Kevin as we huffed and puffed up yet another flight of stairs to buy bagels. I honestly don't remember the stairs...or the wind or the rain.

"Oh it was so sunny just two days ago" everyone tells us. They said the same thing in January when I came here with Tallulah. (The rain chased us out of town to the coast where, if you remember we discovered two great new NZ baches)

This time: "At least it's not cold!" everyone said. (It was cold.) "Quite warm really. We're lucky."And the classic: "You can't beat Wellington on a good day!"

One of my friends' kids said simply: "The rain is just so comforting. " 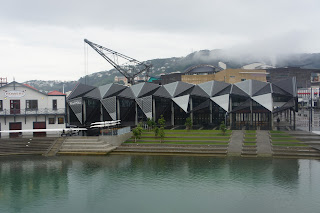 Besides the weather, the City is totally unrecognisable from when I was a student. I established pretty early on that our old haunt, Scribblers pub, was gone.  There were probably many worthy museums here when I was a student but I failed to discover them.  My life as a law student for seven years was a golden triangle of the University caf' (discussing Constitutional Law obviously), the aforementioned Scribblers Public House (presumably again mooting Const. Law), and taking a small break from our constant talks about Const. Law to walk though the Haitaitai Tunnel to play netball for The Growlers.

What I recall as a vast wasteland of wharfspace is now parks, gardens, rock-climbing and Te Papa, the most majestically modern museum chock-ful of Kiwiana, culture and history, including old tea towels commemorating the engagement of Diana and Charles and experiencing an earthquake.


Along the shore is the City and Sea museum which had an stunning hologram show of Maori legends.

Exotic restaurants line the streets with sublimely original dishes and cocktails. However sophisticated you think your palate, you'll be discombobulated by the offerings. In fact you can start to feel like a bit of a culinary plebeian reading the menus. One night some of the old gang gathered in what used to be a seedy part of town to eat at Havana , a Cuban restaurant  in two tiny Victorian houses. Drinks included The Naughty Wife with vodka, lychees and pink ginger and small dishes such as big olives with Donkey Greens, Super Mamouth and Kalamata. (whatever any of that was...) 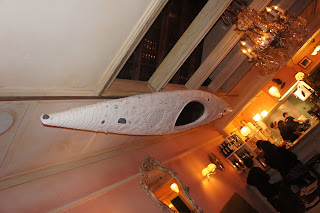 After three days we too became the Absolutely Positively Wellingtonians. Yes the rain was comforting. For a start it allows you to eat guilt-free all the comfort food you like. We found the choicest chips ever at General Practitioner, an old doctors' surgery which in my day was a house of ill repute.  How do you make these chips (fries) so blimin good we asked the waitress? "Boil, peel, fry, fry" she answered. And aren't those the most comforting words in the world?

Posted by About Last Weekend at 11:05 PM