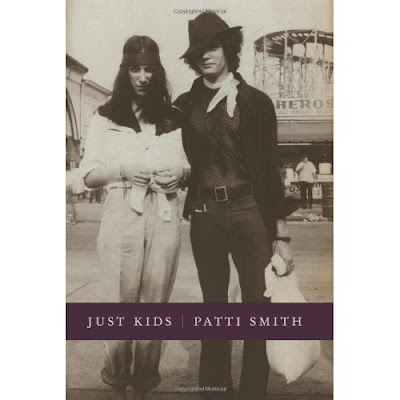 It was at Susan's house and she made Gruyere Walnut Crisps, Tipsy Pig Mac'n'Cheese and Meat Loaf.

The book: When Patti Smith and Robert Mapplethorpe met in late Sixties New York they both somehow knew they were going to be famous. This was before Patti Smith became a singer-songwriter - she later became famous for Because The Night, Gloria and Dancing Barefoot. Mapplethorpe later became famous - and controversial - for his photographs, some of which were provocative. They were lovers first, then lifelong friends after Mapplethorpe discovered he was gay. The book tells of their lives together at the Chelsea Hotel mixing with fellow bohemians, Allen Ginsberg, Jimi Hendrix and Janis Joplin and ends when Mapplethorpe died in the 80's.


I truly enjoyed reading this book. The writing style was extremely linear and simple but the love story was very tender, respectful and non-judgmental. Amazing and I highly recommend it.

A great story of two starving artists in New York City set in the 70's. Their love life was as interesting and strange as the hotel they lived in.


I liked the book because I now know their iconic place in the world. In the end I was more fascinated by Robert Mapplethorpe, the book sent me looking on-line for his images and they are fabulous. His photographs of Patti, as well as the human body, show an incredible black and white contrast, depth and intensity that I do not feel many photographs capture. I never knew Patti Smith - was I so isolated in Arizona? She was described as an angry singer and that was totally so not me.


Cheers to Patti Smith for being a true individual, artist and friend. And for living the hell out of New York City. And for never spending a lot of time or money on her hair!

I didn't know Patti Smith or Robert Mapplethorpe before I read the book. I thought it was an entertaining book with a glimpse into what life was like as an artist in New York at that time. It is also a book about their friendship, love and support for each other.


I found her writing strangely formal and Victorian sometimes, then incredibly simple but realised it was the same style as her music lyrics. Wonderful story of two artists - their love and friendship was sweet, loyal and steadfast in the incredible chaos and creativity of Chelsea Hotel.  The most endearing part was the years they spent sharing their dimes for art supplies and Coney Island hot dogs.


Just Kids was an enjoyable read. What I enjoyed most was being able to peer into these two people's lives that were so different from my own. I knew little about the art and musical scenes and liked reading Smith's perspective. The book was an easy read, though not a literary masterpiece. I recommend this book to be included on your summer reading list.


And don't forget to enter our Giveway of a Coach wristlet purse. The winner will be drawn randomly this Friday 8th April.
Posted by About Last Weekend at 6:43 PM