Last Friday our eldest Harley, 13, graduated - they call it "promotion" here - from his elementary school, a kindergarten though 8th grade Oakland public school. That means for the past nine years he's spent six hours a day with the same 23 kids. 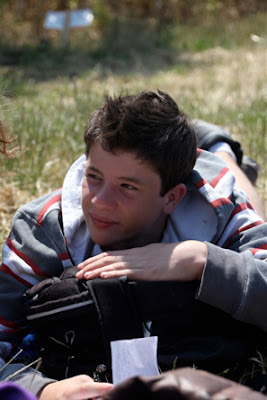 We talk a lot about tolerance, but this is it. He has never fallen out with a classmate and rarely speaks badly about anyone. He doesn't gossip about what goes on at school - I wouldn't catch a whisper of the occasional drama if I weren't good friends with the girls' mothers.

And yet he has another trait - do the two go hand-in-hand? Insouciance. I had seen that word written so many times and never quite knew what it meant.  Recently I saw the word used again by Sarah. It basically means slacker. Lighthearted unconcern, nonchalance. It's the opposite of anxious or solicitude, the uneasiness of mind. Perfect! When once I thought of Harley as being peculiarly disinterested and content to do everything half-arsed except for watching acreages of television, I now have a beautifully lyrical word to describe him. Two beautiful words actually: Insouciance Decelere.

Flicking through his yearbook I happened to notice Harley's baby photo was one that I had not seen before. Apparently Harley couldn't be bothered to bring in a baby picture of himself and handed over a spare one from his friend. The computer teacher, who was collating the yearbook, realised too late.


Throughout school he was genuinely dumbfounded by friends who strove for A's and A-pluses: "Too much work" was his view. His views on the future: "Someone has to go to community college." He is secure in the knowledge that there is a highly-paid job out there where the first prerequisite is to quote verbatim whole episodes of Malcolm In the Middle. The second pre-requisite knowing the stats for the most obscure basketball player at the most obscure college. 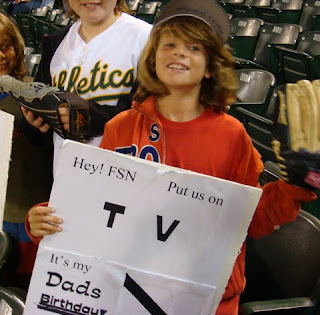 Though he never had any interest in computer games, his computer skills have us slapping our heads. Slumped in his chair, facing half-on to the computer, leg up on the wall and other hand texting on his iPhone, he can do anything on my blog, photos, in-box or whatever. I confess I might have collected him from his classroom once or, er, twice to get out of a computer pickle. When that seemed extreme, I would call him or email. "Mum" he whispered from the bathrooms once: "I'm at school, stop calling me...I already told you...just click on computer and the devices button... "
He has five categories for anyone: kinda annoying, super-annoying, really nice, super-nice and okay. His opinions on anything - except burgers - are evinced only following hours and days of probing from me. But he never volunteers a bad opinion of anyone and has never complained about anyone at school being mean to him, though I know they have. When I enquire about scraps at school (not involving him) he shrugs, he knows nothing. 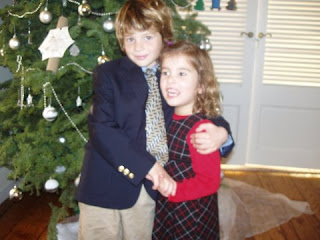 But get him on burgers and he will talk for hours.  Are In'n'Out burgers better than Wendy's? Could go either way. But the best is Nations. No further edification and extrapolation, that's pretty much the tenor of the argument.
Which is not to say he doesn't hear or see things that go on. Once when Tallulah was distraught by how someone was treating her,  Harley told her: "Just say in your mind: You're so bloody annoying, I can't stand it." Or, he says, just make a joke: "Is there a buzzing fly in here? I can't see anyone but I can hear something super-annoying."

After a day abseiling in Mexico, rock-climbing in Santa Barbara, playing basketball with Oakland's best or attending a carnival-like party in San Francisco, you will ask him how it was. "Good". That written four letters cannot convey how he says that word. As Darth Vader can suck the air out of the room so too can Harley suck the emotion from any given word.

On the other hand he is flexible and independent despite being shy. He could be happily dropped off anywhere from the age of two.  When he started school, he wanted me to just open the car door and let him hop out. He was mortified when it transpired that parents had to stand by their children at the entry door. What about I come in to help with art projects, PE, field trips? I would ask him. They have enough mothers already, he told me every time. Or: Cancelled! he would say.

Though he hates being photographed, or any kind of attention, he knows to show respect. This weekend he was invited to be in the court of a classmates' Quinceanera, a coming-of-age ceremony, and he was happy to wear a tuxedo. 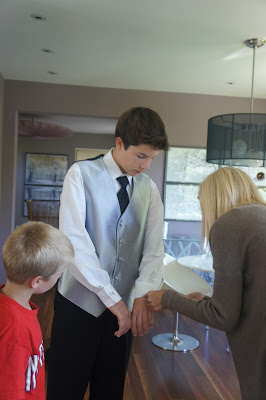 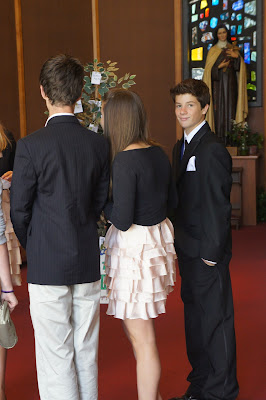 Harley was just about to turn five when he started our little Oakland school of 350 children. We had just arrived from London where he had attended a private pre-school opposite Hyde Park called Ravenstone House. It was set in an leafy old cemetery where the bodies had been exhumed. Somehow he had acquired a plummy accent. But he slipped into his new school instantly and within months he had gone from "Mummy - what's for tea?" to "Yo, yo, s'up, mama."

He did keep a few expressions for a while. After escorting him to the hallway, his long-suffering kindergarten teacher asked:  Do you know why you're here? To which Harley answered: "We've been very, very, naughty."

And he was often heard to mutter: "Oh bloody hell, not another Learning Centre again!"

The girls in Harley's class kept telling him before graduation: "Your mother will cry so much at graduation. You're her firstborn. She'll be so sad." Harley replied: "Oh she's not like that. There's no way my mother will cry."

"He's gone now" parents of much older kids told me: "Once they get to high school they're gone from you." Part of him will still be here, continuing to watch endless re-runs of Two and a Half Men.  Interspersed with shooting hoops... right outside the TV room. But when I saw him walking down the aisle at his graduation ceremony, I saw the truth and I cried. I knew that part of him had left forever. And it was a very sad day.

Posted by About Last Weekend at 11:52 PM