I intended to write about our most memorable meal in France - but let's be honest - isn't it the loos in restaurants that you really remember? 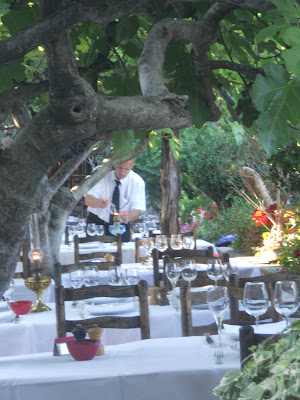 Naturellement, it was a dream to eat at the legendary La Colombe d'Or, a restaurant just outside the ramparts of the hill-top town of Saint-Paul de Vence overlooking the rolling Provencal hills. This is a place where you sit where Picasso sat, where you eat within olive-spitting distance of a Picasso painting and where you can almost hear that famous row between F Scott and Zelda Fitzgerald over Isadora Duncan.

But today reading the ever-hilarious Trish of "Mum's Gone to..." I was reminded that the toilets are the thing. Whether they're old, dodgy, sparkling, plentiful or palatial, they are all part of your memories.

Through the years, this leafy place was the daily watering hole and home-from-home for a score of artists including  Picasso, Modigliani, Miro and Chagall who met with their contemporaries and presumably chatted about how brilliant it would be to draw stuff that was "scribble scrabble" or "wobbly" as my kids would say. Or painting people with huge noses and disembodied hands coming out their tummys.  Pablo and his mates were poor and they paid for the meals with paintings (this was before they realised the big nose and hand-sticking-out-of-the-tummy thing would take off). The result is a small, intimate restaurant which has more major artworks than most world-class galleries.

We assumed we had to book months in advance but the streams of paparazzi and stretch limos from Cannes had vacated the streets and we were willing to take a 7.15pm table (horrifically early-bird by French standards).


Like some before and given the portentiousness of the place, I thought they would spot my grubby traveller's feet and red-rope barricade us from the chic Nice crowd. But they could not have been more welcoming and it was like attending the dinner party of a fabulously wealthy friend except for the small inconvenience of paying at the end of the night. And they wrote and pronounced my name "Jeudie" which I will be insisting on henceforth.

Our waiter, Cedric, could not have been more solicitous. We warned him about our rubbish French and he took us through the menu with painstaking clarity describing the potatoes: "Excuse me for my English" he said "but how do you say Dauphinoise?" Oh that's the same in English, I explained, like Salad Nicoise. "Ah" he said, making me feel terribly clever.

I love how the French speak English - with a lilting formality that makes you feel like you are negotiating a terribly important EU treaty:  "If you are in agreement" suggests Cedric: " I will move this alternative table here."
"If I may ask" Cedric enquired later: "How is the meal progressing?"
"Parfait!" I enthused with a couple of glasses of local champers under my belt, fully embracing my Franglais and barely resisting kissing my fingers.

Halfway though my excellent fish, I croaked to Kevin: "I have a fish bone stuck in my throat!" I chugged loads of water but it was still there and I was starting to get panicky. I'll have to go and choke it out in the loos, I explained to Kevin who looked quite stricken. I have never been able to make myself throw up, but needs must. On my way down the stairs I did consider asking for advice at the front desk but I suspected they would call an ambulance or at least a doctor.

I walked down the stairs with a heavy heart and disappeared inside one of the two toilets. I won't go into details but suffice to say there was choking, wee bit of howling and maybe a few tears resulting in a tiny errant fishbone in the palm of my hand. I emerged to the handbasins victorious under the gaze of two glossy Chanel-ed madames. I held my hand to my throat: "Piscine! Piscine!" I croaked. They both clutched at their silky pearls and in unison their CCed ballet flats took one step back.

I gave a joyful "bonsoir" and what I hoped was an elegant wave and returned to my half fish and refreshed glass of champers.
Cedric swept up to our table: "And...the meal's progression?" he enquired.
"Tres bon. Still parfait! " I answered again
He was like the proud Papa witnessing his first child's sentence: "Ah, so you can speak French" he said. It really was the best meal ever.


And don't forget to enter our Giveaway, a Lesley Evers dress which retails at $225. The winner will be drawn randomly this Friday 8th July.

Posted by About Last Weekend at 6:38 PM