Shoes on the Streets...of Paris

Before my final post on France, let's announce the lucky winner of the Lesley Evers dress.  We have just randomly drawn the winner and it's...Erika of Cafe Fashionista! Congratulations Erika! Contact me at jbrettkelly@gmail.com with all your details!

What Parisians wear on their feet is fascinating - brogues, ballet flats, bicycle boots - with whatever they please. No rules - and somehow it all looks fabulous. In the St Germain area, someone called 'Meyer' (any of you heard of him?) was being snapped by the photographer Didier Gicquere. I didn't know either of them but judging by the wave of excitement, I had to get a picture too. The photographer told me: "He is a big rock guy, Rolling Stones and those guys." Clearly he's living the dream in his pinky-red leather trou and black bicycle boots. A gallerist nearby told me photographer Didier is respected in his own right. He was certainly very polite and did a good job of hiding any annoyance when I did a wee dance around him trying to take my own photo. 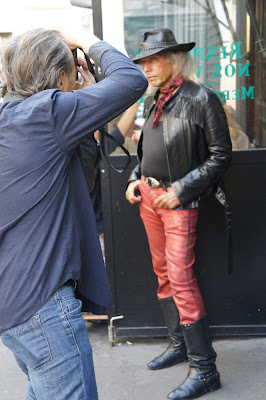 Earlier that morning in the Marais, we were lucky enough to catch sight of this kilted chap, Wilson Claude Balda, who tells me he does political commentary on television. He wears his own kind of boots, scooter-ready. 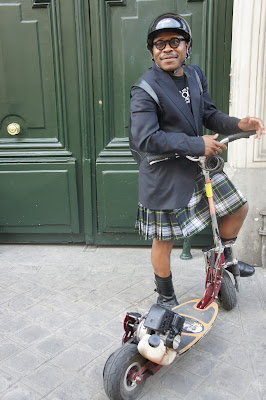 Back to Saint-Germain, at the sumptous Le Societe restaurant (the website seems to be so avant garde you can't actually click in to anything) we decided not to take a table -  grubby travellers' feet again -  but two of the staff were happy to show their footwear. 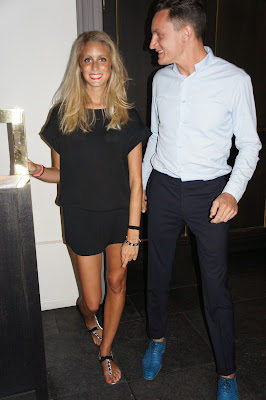 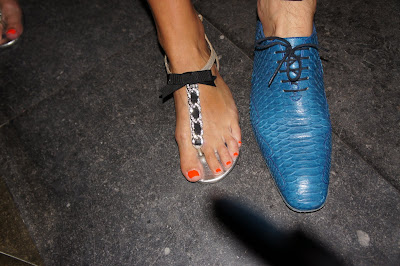 Outside, crossing the road, this immaculate gentleman shows that skinny is the style for both jeans and suit trousers. 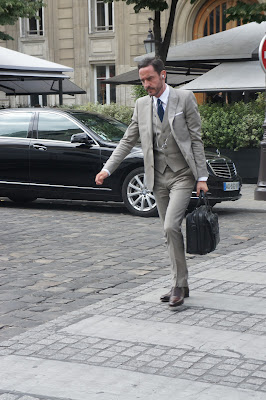 On the other side of the street is the oldest church in Paris, a fully-standing structure from the 10th century (oh yes, said our Paris Walks guide, there are those who have contested the "oldest church" claim, but one dug-up brick does not the oldest church make). There are many men's stores in this area which use the word "dapper" and I can see why. This man was supervising some artisanal work outside the church and I loved that his purple socks highlighted the purple in his jacket. 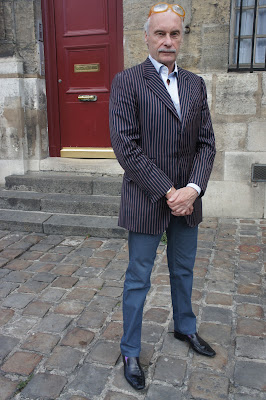 Even the casual guys had put thought into it... 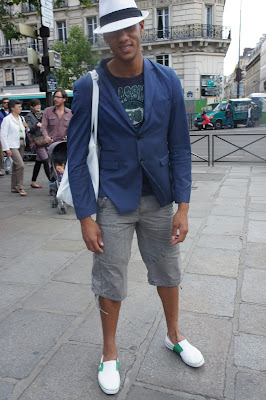 A couple of steps away, this wonderfully romantic woman, complete with bonnet, was walking past, wearing an outfit from another time. Just one photo, she said, I have to run. 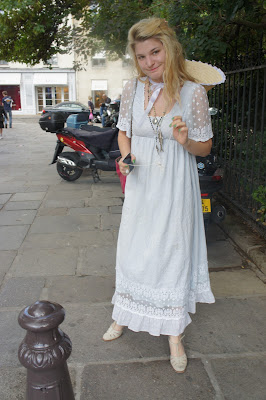 Besides the skinny leg look, pleated high pants were everywhere, as seen on this woman who was racing off to work. 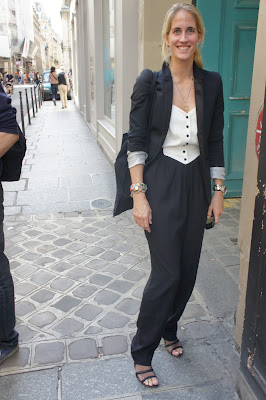 Actually I did find most Parisians walk very fast, because they are not checking their cellphones all the time. (And then when they are seated for lunch they are content to sit alone gaze out to the street and savour the food hands-free.) One incredibly fast walker was this chap on the left, who was on his way to the national library. At first I thought he was friends with this local couple but he just saw me taking the picture and though he would get in on the fun. Pierre Burger he said his name was - he took us to the library around the corner where he is writing a book - due out in November - about Iran. 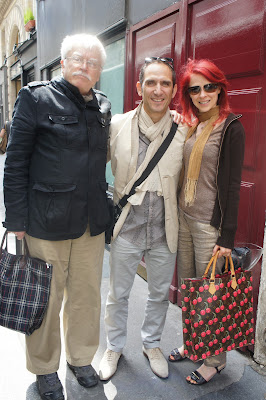 This other couple just up the road were dressed for any eventualities with practical matching sneakers. 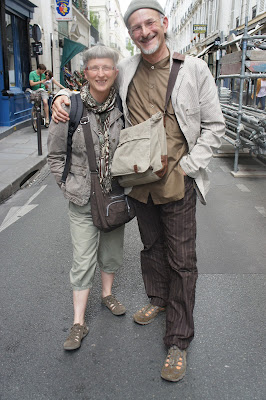 Our one brief foray off the streets and down into the Metro was eventful. We were pick pocketed - both our wallets gone - by a tiny woman and her tinier daughter who refused to move out of the way of the train door. After reporting it to the police in the Champs Elysees - who were friendly but befuddled and strangely shocked to be filing a robbery! - it a lovely sight to see a busload of brides from China fill the bridge and streets. This bride gracefully lifted her layers of tulle to show exquisite red floral heels. 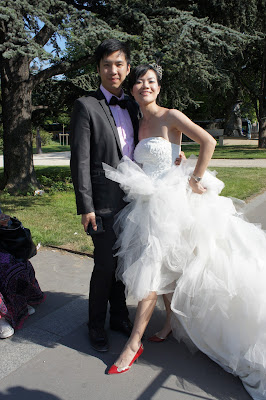 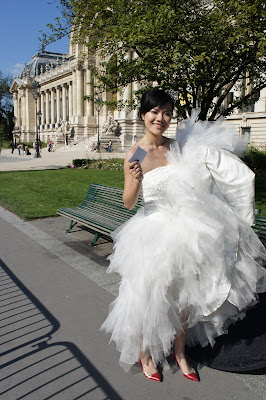 This guy, Anthony Spinello, told me he has a blog as well. An edgy vibrant site called Dirty-Mag (and yes it's safe to click in) about art, news and street style and based in Miami.  "I know what you want" stepping each way into the light, "I've been taking these photos all week....Now I'll take one of you" he said getting out his camera, making me feel for a Paris instant, just a bit hip. 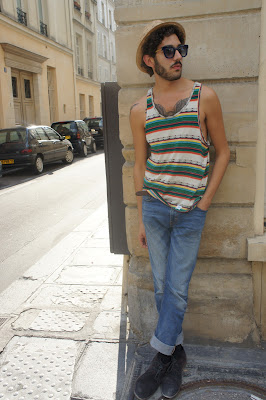 There are beautiful shoes everywhere here...they even sold in flower shops 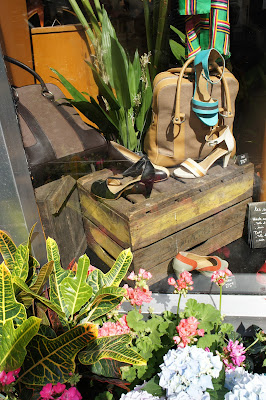 This artful flower shop was called Rosebud, with a poster of Citizen Kane . 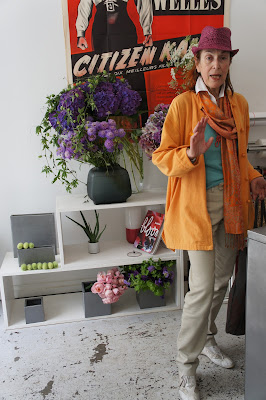 This couple were leche vitrine-ing near the Place Vendome. She is wearing Vuitton and works for Paris Vogue  - and he has started designing men's shoes, a pair of which he is wearing. 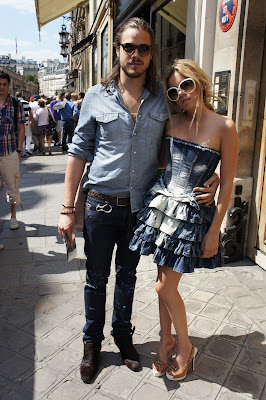 At the end of this road, the bullet-holed Place Vendome was scene of the last shoot-out between the allies and the Germans.  Just around the corner and pretty much at the same time, Ernest Hemingway pulled up to the Ritz in his jeep and walked to the bar. "How can I help you?" said the barman. "I'll take 100 martinis" said Hemingway. It was not known whether he drank them all but he didn't leave for three days. Hope he had his drinking shoes on...


Posted by About Last Weekend at 4:47 PM